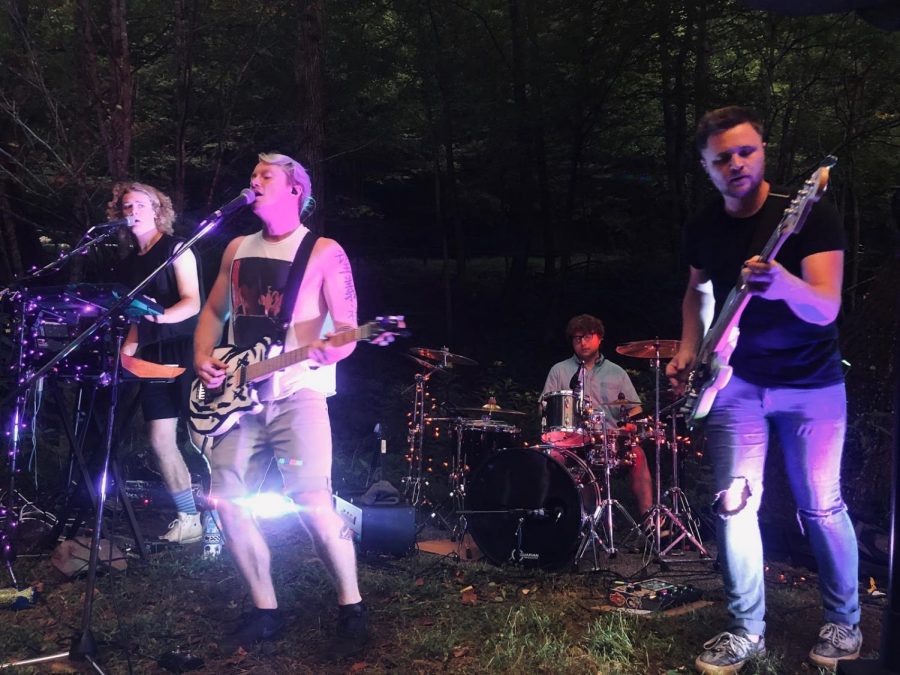 Local pop rock band American Scream experienced a promising start to their career from their inception in late 2019. By March of this year, they had organized the group, wrote, recorded, mixed and released some singles and an EP. Then they looked to perform live. Little did they know, the pandemic was at the country’s doorstep, and live performances would no longer be a reality.

“We heard of stuff going on in China, but then it hit,” said Isaac McCready, lead singer for American Scream. “It was this big ‘failure to launch’ feeling. We were ready to start chasing shows and even had a summer tour planned.”

Isaac McCready said he brought a large, blank calendar before the band with plans to cram it with music production, marketing and reworking live shows. With sullen hearts, the band went back to the drawing board for the summer.

American Scream’s philosophy is putting diligence first, and that’s exactly how they used their time during quarantine.

“We’ve been putting everything we can into the Internet and marketing,” Isaac McCready said. “‘Katie’ was the first single that we put out.”

“Katie” has garnered over 9,000 streams on Spotify since its release on Sept. 4.

“There was a lot of planning pre-Katie,” said Ryan Wilson, bassist for American Scream. “The preliminary work was what brought it. We all came together and shared the load.”

The group’s commitment to quality is not only due to their persistent work ethic, but also drawing from the expertise each member has to offer. Isaac McCready’s brother, Elec McCready is the band’s synth player and primarily created film projects before he got involved in music. He now plays a large role in the band’s music video production.

American Scream’s music videos are another hallmark of their commitment to high production value, relying primarily on self-taught skill and a do-it-yourself budget. The entire band sits in on storyboard sessions for each video to give input until the final product is perfect shot-for-shot, Isaac McCready said. The “Katie” music video attained over 4,000 views on YouTube since the single’s release.

The group also spent ample time considering how they could continue performing live shows. They believed that seeing live, worthwhile performances are crucial to people’s well-being even in a locked-down world.

“Our mental health and our spirits depend on live interaction,” said Isaac McCready. “It’s why you hear so many people talk about frustration with Zoom and video calls. It’s convenient, but there’s something in us that says, ‘This is not in person.’”

For American Scream, the solution was socially distanced, outdoor house shows. They determined that smaller shows and mask-wearing attendees shouldn’t stop them from providing people with intimate entertainment.

The band’s first house show in early September, while different from a typical college house show in nature, was nothing short of eye-catching. It was held in a wooded area near Wilson’s home, using the forest floor as their stage and hanging multicolored flood lights from the trees.

“We have a few people in our friend group that have to be aware of COVID who are immunocompromised, so there was a consciousness of that from the beginning,” Wilson said. “But we didn’t want to stop playing shows altogether. It was the gas we needed.”

For American Scream, the safety precautions were nothing short of the inclusive spirit they aim to bring to all of their shows, Isaac McCready said. The band gives away earplugs to fans attending their shows with noise sensitivity.

“We don’t want there to be any reason that people couldn’t come enjoy this with us, even if that reason is sensitivity to loud noise,” Isaac McCready said. “Our sister is sensitive to noise, and having someone like that who is your family member, you’re automatically used to thinking of those things for people.”

Their sensitivity paid off, and the experimental show was well-received by attendees.

“I thought it was really cool with it being outside, it felt like we were deep in the woods,” said Amelia Lundgren, an attendee. “American Scream are just great performers, so whatever show of theirs you go to is going to be a really fun time.”

Post-pandemic, the group seeks to perform as many house shows as they can to build their audience.

American Scream’s next outdoor house show is on Oct. 31 at Wilson’s home, with the location to be announced on the band’s Instagram in the near future. They will perform another show the following week at Lake Hickory Haunts in Hickory, North Carolina on Nov. 6, and their latest single, “A Little Bit More,” will be released the same day.