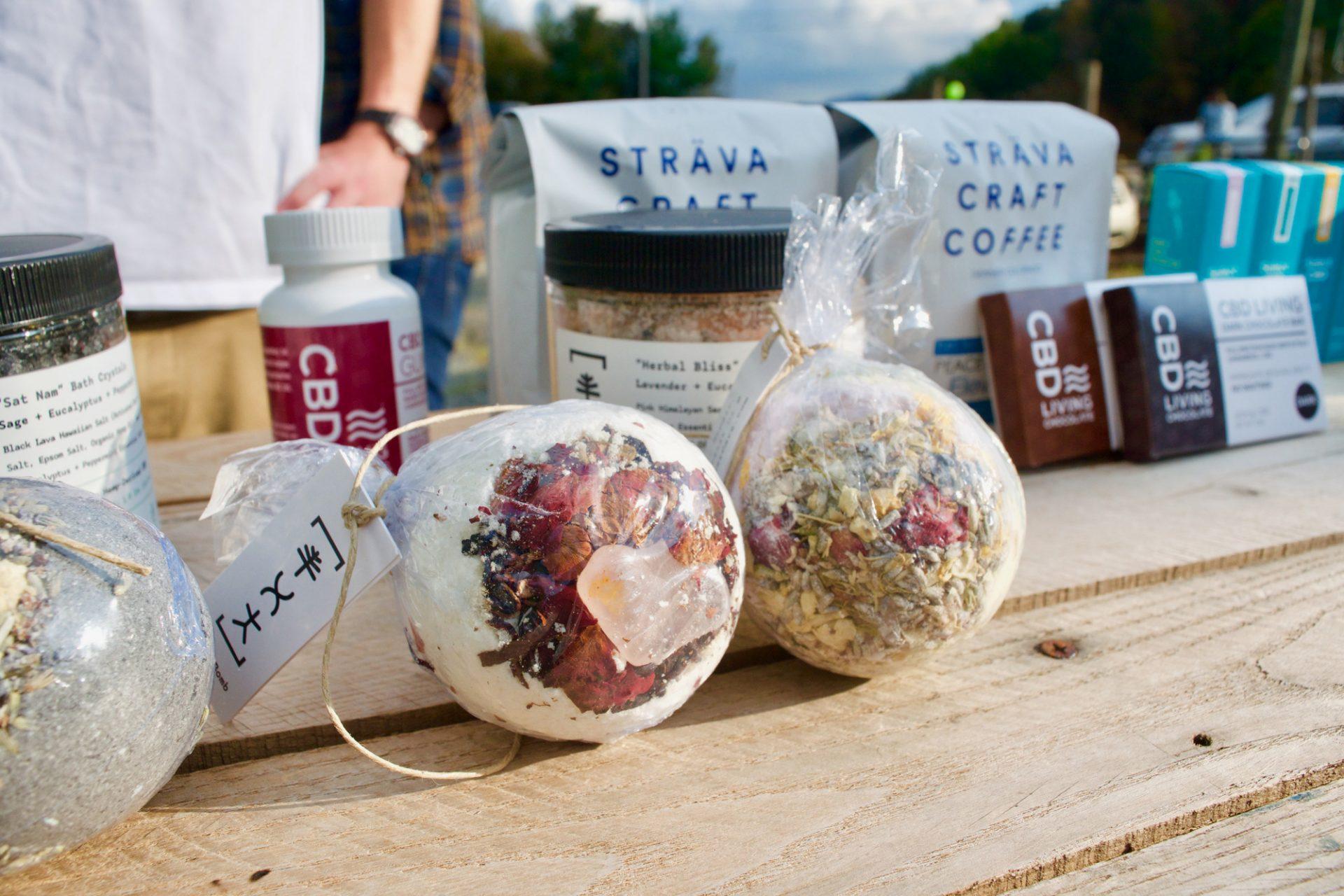 Carolina CBD’s infused bath bombs along with many of their other CBD products.

As public opinion about the effects and misconceptions of Cannabidiol oil continues to intermingle with those about psychoactive cannabis, Facebook group Hempformation hopes to clear the air.

On Sept. 21, founders of Hempformation made their debut in Boone at Folklore with two other local CBD distributors, Carolina Hemp Company, located in Asheville, and Carolina CBD, located in Charlotte. In addition to selling their products, each group presented their mission statements and offered complete transparency by allowing attendees to ask questions. Topics ranged from the potential agricultural impact of the hemp industry, especially for rural communities such as Boone, to the mounting medical benefits of having the option to choose CBD as an alternative to medications.

Brook Meeks, a mother of two, sat on a park bench as one of her children babbled to himself while attempting to eat an apple he marinated in the dirt as the other child tumbled on the jungle gym. Keeping an attentive eye on her kids, Meeks simultaneously opened up about CBD oil and how it inspired her decision to start Hempformation.

Brook Meeks said life after the birth of her first child came with little motivation, emotional distress and anxiety. It was not until her partner noticed that when taking their weekly visit to the river, she became so stricken with anxiety that it became apparent she was no longer her normal self.

At the time, Brook Meeks said she did not know how to identify what she was going through. Discovering she was experiencing postpartum depression took years. During that time she took measures to seek out holistic remedies as well as therapy and acupuncture in an attempt to treat something she could not identify.

After her second child was born she started to experience more intense postpartum side effects, Brook Meeks said.

“It got to the point where I was having a very hard time leaving my house,” she said. “I was so angry and so scared.”

The week she made an appointment to see her doctor about getting prescription medications to treat her anxiety, she discovered CBD oil. Needless to say she cancelled her appointment.

“Within 32 hours my whole life changed,” Brook Meeks said. “In the week my anxiety was gone and I was more present with my children and my partner.”

She finally “got her sunshine back,” as her partner Seth Meeks put it.

Brook Meeks currently sells CBD oil and is a firm advocate for its medicinal implementation as is her business partner Lynn Daly.

Daly called it an unwavering fire, a flame that ignited her desire to pursue the cause of legitimizing the mainstream use of CBD oil in North Carolina.

The source of Daly’s ambition comes from watching her friends benefit from the use of medical marijuana and CBD.

“A friend of mine was suffering from severe endometriosis about a year ago and she went into full remission,” Daly said.

The recovery of her friend occurred without the use of prescription drugs. Before Daly suggested using hemp, her friend was using steroids and prescribed medications to no avail.

Today, Daly and Brook Meeks both work with Hempworx, a direct-to-retail brand that distributes CDB to individuals through a completely online interface. Through the online medium, Hempworks is able to connect individuals with resources that allow them to distribute CBD where it is legal.

The Hempworx website is verified by the FDA and claims to provide complete transparency for its customers and distributors. They also claim all hemp crops are free of chemical fertilizers, herbicides, pesticides and in addition are tested to measure potency as well as test for contaminants such as heavy metals, mold and cannabinoid content, according to the site’s main page.

Thanks to the Industrial Hemp pilot program provided through the North Carolina Department of Agriculture. Daly and her husband hope to grow their own hemp in the future. Hemp production is currently not legal under the North Carolina Department of Agriculture. However, with the federally protected pilot program individuals can grow their own hemp crop provided they can supply documentation proving they have farm income.

The pilot program also only permits the cultivation of hemp if the farmer is transparent about how they plan to sell their product. For this reason, sellers often align themselves with distribution companies if they do not already have an established business of their own.

“For North Carolina this is literally going to change the face of agriculture,” Daly said.

“Since its creation in 2014 CHC intended to set a high standard for the CBD market today and for the future,” Patton Cardwell, a cofounder of the Carolina Hemp Company, said.

They are currently working with local and regional farming communities as well as local educators, industry leaders and manufacturers to bring jobs to thousands of people, according to the Carolina Hemp Company.

“We follow a biologist model in that we get out of the way of the plant and stay as close to nature as possible to produce something that people feel good about putting in their bodies,” Patton said. “We know there is a time for hemp and a time for prescription medications, but if there is an opportunity for someone to use CBD we would like to let them know they have that option.”

This possible alternative to synthetics is also proving to be a more economic option for families, especially for individuals living with epilepsy.

Cardwell said he has a client who buys CBD oil to treat his son’s epilepsy. Over the course of nine weeks the son after taking regular doses of the hemp oil has not suffered from a seizure and is being weaned off of his prescription medications.

Caldwell added that despite medication not only did the boy continue to have seizures but he also experienced mood swings and had difficulty focusing in school. Now the family only pays $99 a month for a supply of CBD oil.

“It is the centerpiece of what we do because there continues to be so much stigma but ultimately after education the experience is what will bring people to deeper understanding,” Caldwell said.

Featured Photo Caption: Carolina CBD’s infused bath bombs along with many of their other CBD products.