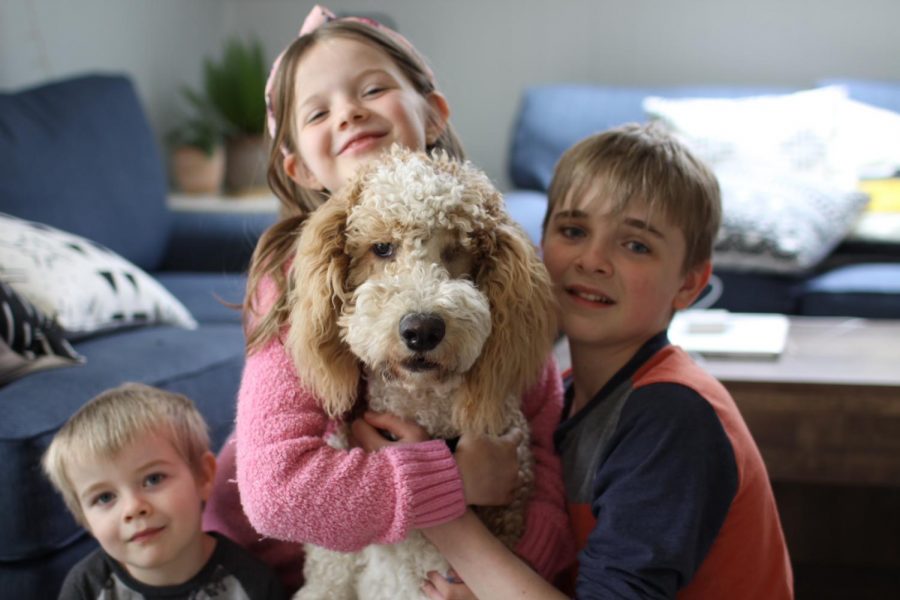 The three Delaney children with their Goldendoodle, Winky.

When a family adopted their Goldendoodle in October 2019, he came home welcomed and loved, much like any other puppy. However, one thing made him a little bit different: a birth defect causing him to be blind in his left eye.

The Delaney family of five found Winky online from a local breeder. The breeders were hoping to give Winky away to a family wanting to take care of him and his existent health problems, which they were not willing to do.

“It’s been hard to make friends for the kids with things being closed because of COVID, so he came at just the right time to make up for it,” said Scott Delaney, the father of three.

The family moved to Fletcher from Ohio back in 2019, adding Winky as an additional member, where he was quick to be accepted into the family.

However, when the family noticed Winky showing discomfort in his eye, they took him to an ophthalmologist. It was there they discovered Winky’s initial diagnosis wasn’t accurate, and he needed surgery to remove his left eye that same day.

As a single-income family, the $2,200 surgery was a lot to fork over without any time to financially prepare. This is where the idea of setting up a GoFundMe page to help cover costs was born.

The Delaneys’ three kids Emerson, Sylvia and River, are also helping out with the fundraising. With their parents, the three have been making homemade dog treats to give to donors, alongside autographed pictures of Winky to show their gratitude.

For donations ranging from $25-50, the Delaneys’ will send you an autographed photo of Winky, and for anything over $100, they’ll send that alongside a dozen of their homemade treats. They are also selling the treats for $1.50 each.

“From a fatherhood perspective, I wanted the kids to try to create something and share it,” Scott Delaney said. “I thought we could help mitigate the cost and also teach the kids how to work on a project and follow through.”

The page quickly gained traction throughout the Boone community after Scott Delaney posted a link on a popular Facebook page, App State Classifieds. They have raised a little over half of their goal and hope to keep going.

“When I first heard about it, I wondered if it would be effective. We started getting the donations, and I started to see that it would actually help. It was really cool that people we don’t know would do something like that for us,” Emerson Delaney said.

Scott Delaney, a police officer with the Boone Police Department, plans to leave their homemade dog treats and a “leave what you can” donation jar outside of the station in hopes of reaching their fundraising goal.

“So far, it’s been incredible. Folks in Boone have been so generous and thoughtful. It has been a really special experience for all of us. It was really nice to have a reminder that strangers are still looking out for one another,” Scott Delaney said.

Winky’s GoFundMe is still active and can be found here.