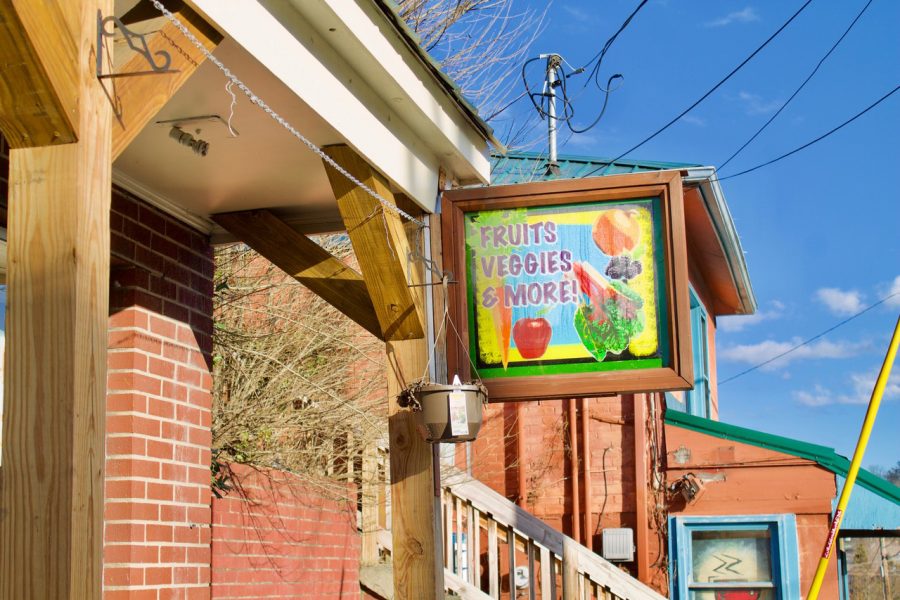 Fruits, Veggies and More is a produce store located on King Street that carries local products.

Every day when Allen Curtis turns the key on the door of Fruits, Veggies, and More, it costs him around $300. Most of this money, he said, he doesn’t get back.

Curtis has owned Fruits, Veggies, and More, a small grocery store located on King Street, for eight years, selling products from farmers in the area.

Homemade jars of jelly, locally grown apples and grapes, kombucha on tap and a large variety of vegetables are just a few items he sells.

In September, Curtis made $6,000 in sales, according to his books. He said it costs him $10,000 each month to rent the space he’s in and for electricity and overhead costs.

Curtis said the $300 it takes him to operate every day covers utilities, power bills, maintenance and produce costs. He has two employees who work the register, but had to cut down on their hours and stay in the store most days because he cannot afford to pay them. He rarely gets a day off.

Daily sales range from around $100 to $350, so on most days, Curtis loses money. The extra cash he makes on days the store is busier, he said doesn’t make a big difference because the next day, he’ll most likely lose money again.

The Fruits, Veggies, and More truck used to transport produce from around the area is another factor in the business’ loss of money. This year, Curtis said, he has spent $3,000 on repairs for the truck and recently received another bill for $5,000 worth of repairs.

“What am I going to do? We don’t know yet. We haven’t decided on what to do about it because I don’t have the money to fix it,” Curtis said. “My wife pays the bills. She has a good job. If it wasn’t for my wife – that paid our personal bills, took care of stuff – I could not stay here. She’s carried the load for years.”

Curtis said his wife, Susan, is a recruiter for Samaritan’s Purse. Samaritan’s Purse is “a nondenominational evangelical Christian organization” that provides aid to people in need around the world, according to its website.

Fruits, Veggies, and More moved four years ago to its location across from App State’s library. Curtis said he thought the move would attract more students and the main reason he moved was to be closer to them.

In the first two years at the new location, Curtis said business did well. He made a profit and had people stopping by the store all the time. Curtis said in 2016, he made $58,000 in sales. However, in the past two years, he has noticed a big difference in the revenue and the students’ support of the store.

“Students have been very slack in the last two years,” Curtis said. “I don’t know why that is. I see your habits changing a whole lot. The students’ eating habits are changing.”

While school is in, though, Curtis said he has to rely on the students to come into the shop and purchase produce and other items rather than local residents.

“The locals won’t come up town because they don’t want to fight the traffic because the students are here,” Curtis said.

In the summer, when the students are gone, Curtis said, he has a local following that’s “unreal.” He said he does 10 times more business in the summer than he does during the school year.

The 2018 survey conducted by the National Grocers Association found that 64 percent of independent shoppers are “very/extremely satisfied with their local supermarket.” However, this number is not reflected in Fruit, Veggies, and More’s sales.

Curtis said in the 2018-2019 school year, sales have been worse than in previous years because rainfall in the summer wiped out most strawberry fields from the farm he buys from. The farm is located about 65 miles away from Boone, Curtis said. He said he couldn’t disclose the name of the farm because his competition has been trying to figure it out for years.

May is the most prominent month strawberries are ripe, according to the North Carolina Harvest Calendar. The summer months, Curtis said, usually get him through the year because of all the strawberries he sells.

Curtis said he knows the prices of his produce are not why students aren’t coming in. He said his prices are typically lower than bigger super markets’ prices. Recently, however, he said he unwillingly had to raise prices of individual items, such as apples.

Curtis said previously all apples sold in the store were priced according to weight. Now, if someone comes in and buys one or two apples, there is a set price of $1 per apple. However, if someone buys three apples, Curtis weighs them and gives the customer a price by the pound.

“I have to. There’s no other explanation to it,” Curtis said.

Curtis said he gets his apples from a local orchard and loads up on bushels of apples about every two weeks. The last time he went, he said he got 24 bushels. There are 42 to 48 pounds of apples in one bushel, according to PickYourOwn.org.

Patrick French is a junior at App State and a regular customer who shops at Fruits, Veggies, and More at least twice a week. French said he heard about the small grocery store his first year at App State and would occasionally stop by, but only started coming in regularly this year.

He said an older student recommended going to Fruits, Veggies, and More and told him, “It has lots of good stuff. It’s cheap and there’s a cool dude that owns it.”

This semester, French said, he is trying to not go to chain grocery stores, but to shop locally whenever possible. Fruits, Veggies, and More’s convenient location has also been a factor in French’s decision to shop there, although he passes Earth Fare on his way to the store.

“Earth Fare is for like random, random stuff. I try not to go,” French said. “Anything like tomatoes, ramen, butter, the necessities, I go here.”

A couple visiting Boone from out-of-town said they found the store while walking down King Street to their Airbnb. They purchased locally made caramel covered peanuts, and the woman said she walked into the store earlier to buy some apples.

Curtis said he occasionally has one-time customers who shop at the store, but he also has a decent amount of regulars who come in, most of them students. He said he enjoys talking to them and forming relationships.