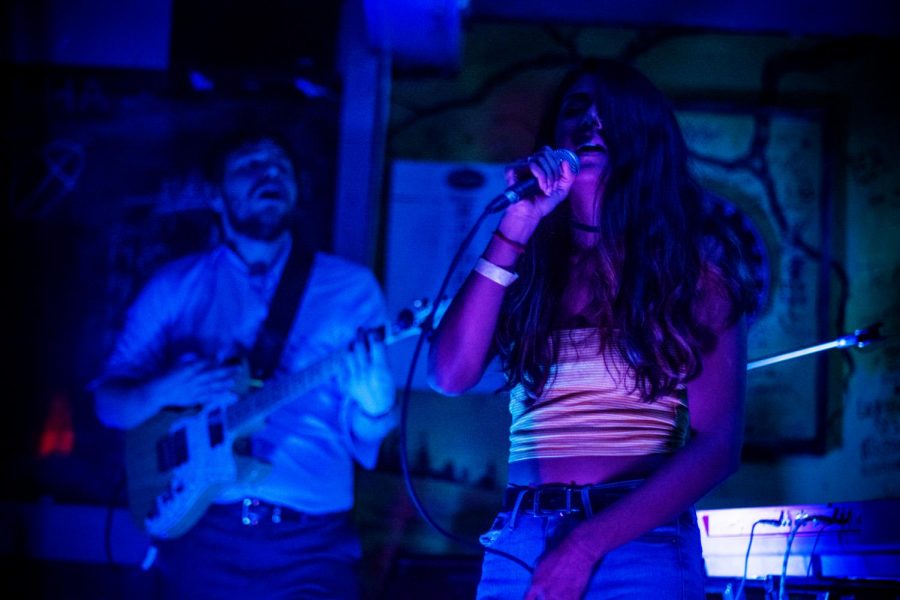 Foxy Moron's lead singer, Elora Dash, takes center-stage during Saturday's show at TApp Room while guitarist Lucas Triba shreds alongside her. The band's next show is on February 9 at Ransom.

Foxy Moron, a rhythm and blues and hip-hop infused band, not only delivers a unique sound and approach to R&B, but also background and variety. The band was founded by students of App State, where folk, indie and country music dominate. The groups played several shows in Boone, and most recently Raleigh.

The name Foxy Moron was inspired by a friend and former band member who suggested it.

“We all really liked the name, so he was cool with us keeping it,” Dash said.

The band plays covers, but is also working on original material.

“We just learned a lot of covers together and we made all of them our own,” Kennedy said.

Foxy Moron’s covers range from pop music to classic rock. However, by absorbing and listening to similar artists during the early stages of the band, the group soon realized the R&B sound suited them best.

One of the members said despite the lack of R&B sound surrounding Boone, its environment and music scene have influenced their music.

“I’ve spent a lot of time busking on King Street playing to the environment and the people that walked by. Somehow, I’ve always played in folky country style when I try to play what’s coming out of my heart, even though I don’t really like country music too much,” Triba said.

Triba said the Hayes School of Music, Boone and its population have inspired him.

“(The Hayes School of Music) relates to what we do, and it’s just more practice for school-related things,” Dash said.

Although the Hayes School of Music has a classical approach to music, Foxy Moron said it has given them a well-rounded knowledge of music.

“I have played a lot of different percussion styles, really (the band) has just helped me play with people and be a sensitive musician,” Kennedy said.

The music school also allowed them to connect with like-minded musicians who share their music tastes and who are also in bands, Dash said.

Although the band is made up of mostly students, the members said they do not feel that juggling school, work, personal life and the band have been too much of a hassle.

The group has a unique approach to R&B by adding guitar-driven solos to its music and live shows, Triba said.

“I usually play a more rock-heavy kind of style, especially when I hit my solos,” Triba said.

All of the members find ways to weave their backgrounds into their music. The group hopes to eventually integrate a non-western sound into their music while sticking to their R&B roots.

“I would really like to incorporate some Indian classical music. It uses some elements of music I’m not familiar with,” Dash said.

“I guess it’s hard to say whether or not we want to create a different style of music. I think we would stick with the same roots,” Collins said.

However, Dash said the band will evolve with them in relation to their life experiences and events.

Foxy Moron will play at Femme Fest on March 16. Femme Fest is a mini music festival hosted at Legends that will feature female-led bands and artists. There will be a $5 donation fee. All proceeds will go to OASIS, a nonprofit that serves victims of sexual and domestic abuse. The event is coordinated by Dash.