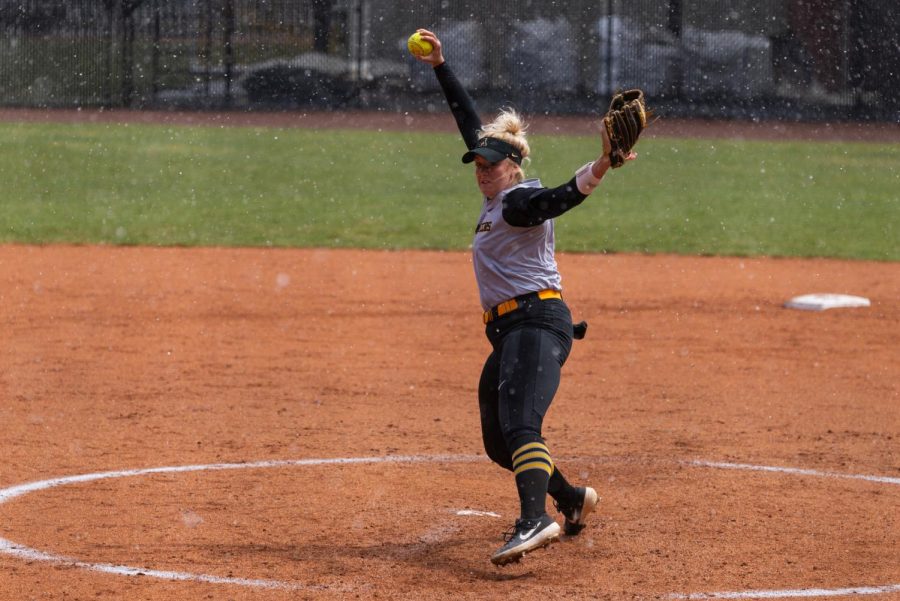 Junior pitcher Kenzie Longanecker is 13-1 so far on the season and has the lowest ERA on the team of all players with more than 8 appearances.

Quality pitching is one of the most important building blocks of a successful softball team, and junior Kenzie Longanecker provides that for the App State softball team.

The Mountaineers are off to their best start in over 10 years and sit on a 23-9 record, 10-2 in Sun Belt play, and Longanecker is a big reason why. Statistically, she is off to the best pitching start in App State history.

“I’ve seen fire from her a lot,” head coach Shelly Hoerner said. “On the field she’s really stepped up her game, and it’s been really fun to watch her compete this year.”

She hit the ground running as a freshman and the Mountaineers have considered her a staple since 2017. That season, she led the team in innings pitched with 134 and 112 strikeouts. She finished the season ranked No. 9 in the Sun Belt with an ERA of 2.77.

As a sophomore, she led the team in appearances with 30. She also had the lowest ERA on the team at 3.83, ranking No. 10 in the Sun Belt.

As a junior, she has shown improvement in stats across the board. Her ERA has dropped to 2.41 and when she is on the mound, the Mountaineers have outscored their opponents 100-48.

As the Mountaineers prepare for the second half of the season, they look at Longanecker to lead them to a strong finish in conference play and a solid showing in the postseason.

Longanecker’s presence off the field is just as important to the team as when she plays. Her teammates consider her a perfect fit for the family that Hoerner and her staff have worked so hard to build.

“Obviously she’s a fantastic softball player, but she’s a great person too,” senior catcher Jenny Dodd said. “She just brings a lot of  passion to our team and a lot of grit.”