Longley returns to the Court 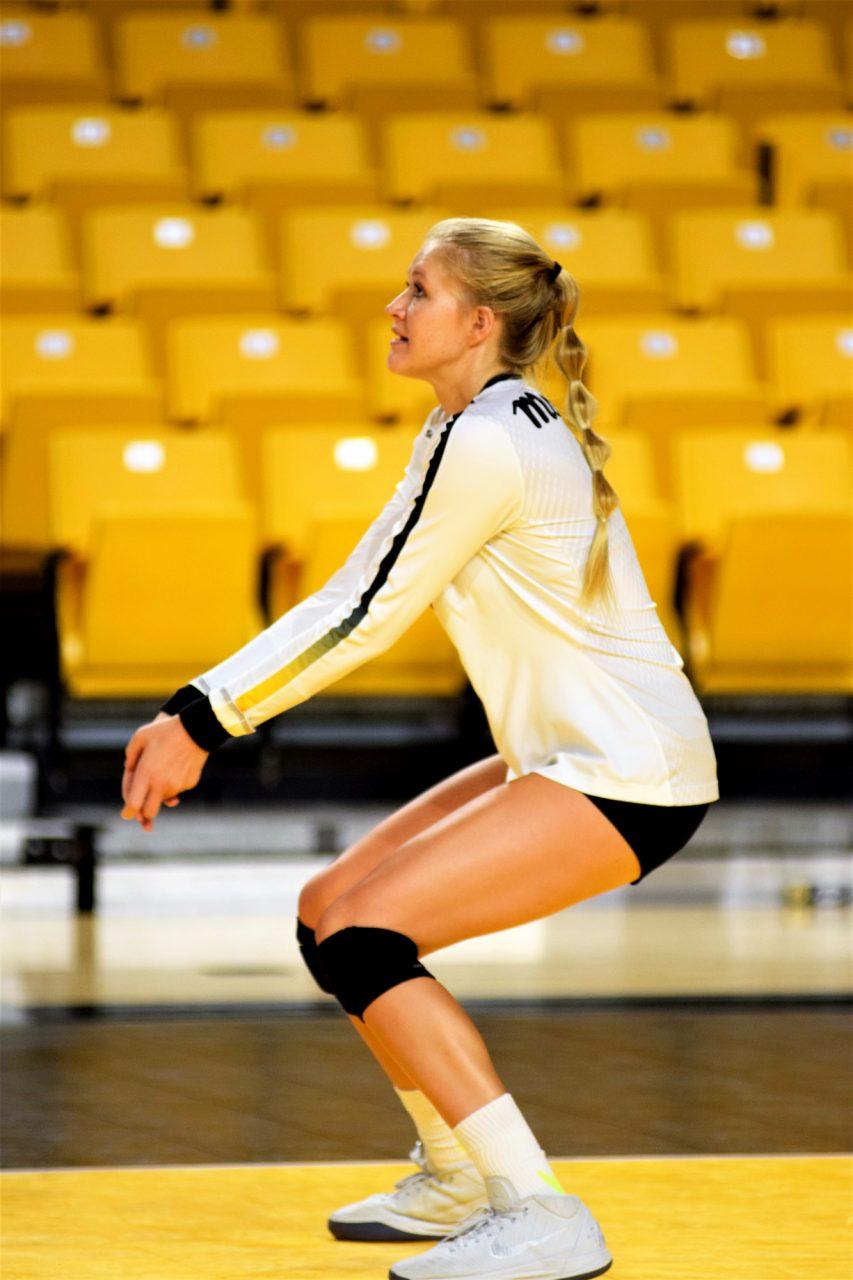 Outside hitter Emma Longley gets ready for a bump.

As a freshman in 2016, junior outside hitter Emma Longley was a key piece of the Mountaineers volleyball team, leading the team in kills with 363 and digs with 284. She posted double-double statistics nine times during the season and had five matches with 20+ kills, including a 30-kill performance against the Virginia Tech Hokies in her first ever match.

After such a stellar freshman campaign, Longley was expected to be just as integral as a sophomore in 2017. Things started off well, producing a double-double in the first game of the season with 18 kills and 13 digs against Missouri State University and following up with a 17-kill performance against UNCW two games later. But it did not last, going down with a lower leg injury that she started to develop as a freshman, which sidelined her for most her sophomore season.

“I had a peroneal strain so the tendon in my lower leg was strained to the point where I could barely even walk, so I was non-weight bearing for about two and a half months,” Longley said. “The rehab was a lot of icing and heating and then practicing walking and balance so I could build my strength back up. Once I got back into lifting it was gradually going into lower leg lifts like squats and presses.”

Longley would return to appear in the final seven matches of the season, earning starts in both Sun Belt tournament matches. She would finish the season with 107 kills, an average of 2.82 kills per set after appearing in 38 total sets.

“I feel bad for her, she hasn’t been able to put together a full season yet. If you look at two years ago, the way she started with 30 kills in her first career match, 37 kills two weeks later, we expected big things out of her and then she just got hurt. She had a great freshman spring, expectations were really high, and then that thing just flared up again,” head coach Matt Ginipro said. “Then when she was cleared about three quarters of the way through the season and we put her in in the fourth set against Troy and she goes off for 20 kills in two sets. You look at what she’s done on the floor, I still think she’s going to be one of the best outside hitters who’s ever played here. She just hasn’t put in a full season yet.”

She has started off strong so far this season, starting all six matches and totaling 73 kills for an average of 3.65 kills per set. She has also looked good on the defensive side of the ball, posting 36 digs for an average of 1.80 digs per set and adding five blocks, according to appstatesports.com. The team has been equally impressive, going 4-2 through their first six regular season matches and grabbing a victory over Wake Forest University in a preseason exhibition.

“She’s always been a hungry player but I think the whole ‘I’ve been here for two years, I’ve worked my butt off and I haven’t played a whole season yet,’ has gotten to her and she wants to have a really good junior season,” coach Ginipro said.

App State still has a number of key games remaining this season before Sun Belt play begins in late September, including a tournament that is jointly hosted by North Carolina State and Campbell University where the Mountaineers will have matches against Utah Valley University, Wright State University and Campbell.

“I think our whole team looks phenomenal. It’s going to be a real team effort for everyone to look great,” Longley said. “I really am ready (to get back), I’ve missed playing and competing, especially in the fall. I’m excited to get after it.”

Coach Ginipro and his staff are confident that she is prepared to be successful on the court again, but they are taking precautions to make sure that she does not get hurt again.

“She had a big weekend in Asheville. She’s doing great things in practice, not only as a hitter but just as a leader and as an upperclassman. We’re just trying to make sure we’re keeping her healthy because we know what she can do for us on the court,” Coach Ginipro said.