Looking back: Kidd Brewer Stadium over the years 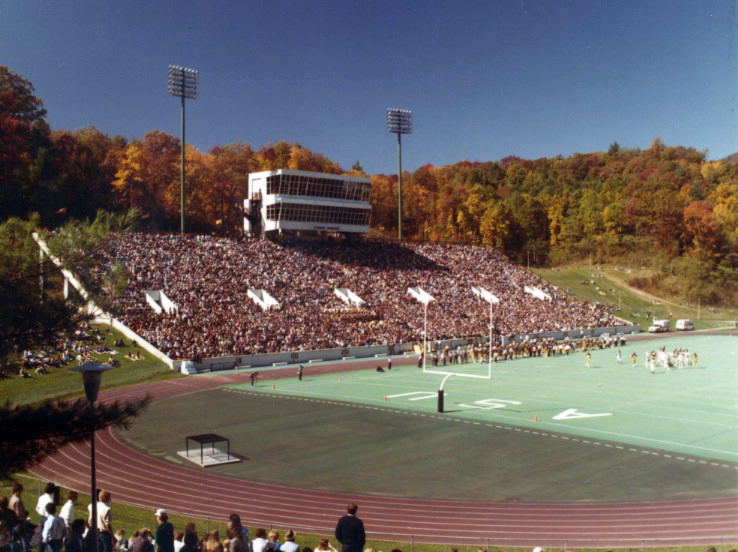 Over its 60-year history, Kidd Brewer Stadium, also known as “The Rock,” has become one of the most intimidating venues for opposing football programs to compete in. The Mountaineers have compiled a home 263-77-5 record, according to App State Sports, including victories in 109 of the last 128 home games.

Opened Sept. 15, 1962, in Boone and originally named Conrad Stadium, the stadium was previously named after former university trustee and R.J. Reynolds executive, William J. Conrad. It was originally designed with just 10,000 seats, according to App State Sports, but has increased massively in capacity. The stadium has since been renovated to a capacity of 30,000 and has seated up to 35,126 people in 2017 when Wake Forest visited Boone, and 31,061 this past season against Coastal Carolina.

An All-American quarterback at Duke before his hiring at App State, Brewer began his coaching tenure in 1935 and remained head coach through the 1938 season, according to the Appalachian Football 2009 Media Guide. Serving as both coach and athletic director, Brewer established his legacy within the program in the 1937 season as his Mountaineers outscored their opponents 206-0, finishing the regular season undefeated and unscored upon.

Over his four-year coaching stint, Brewer’s Mountaineers accumulated a 30-5-3 record, including postseason games.

Brewer departed from coaching to enlist in the United States Navy during World War II and served as secretary and assistant to United States Senators Josiah Bailey and William B. Umstead. In the 1950’s, Brewer amassed wealth by owning land used for roads and urban development.

Brewer began a political career in 1956, filing to run for lieutenant governor and finishing third in a field of five nominees. In 1963, Brewer was convicted of bid rigging for paying highway commision engineers to rig specifications in favor of the companies he worked for, according to his obituary in Star-News.

Brewer completed just four months of his sentence before his release, and in 1964, he ran for governor unsuccessfully. His last attempt at politics came in 1968, when he ran unsuccessfully for the North Carolina Court of Appeals against Raymond Mallard, the judge who charged Brewer for bid rigging, according to the Star-News.

Three years after the stadium was renamed in his honor, Brewer died of lung cancer at age 83.

Many renovations have been made to this stadium, including the rebuilding of the stadium in 1979. In 1995, the stadium added 10,000 seats, which increased its overall capacity to 16,650.

In 2006, the former press box area was removed to build a 100,000 square foot stadium complex. The state of the art complex, which can be found on the north end zone side of the stadium, includes athletic training facilities, locker rooms, meeting spaces and more.

In the fall of 2021, Kidd Brewer Stadium added a plaza and statue to honor former head coach Jerry Moore next to the stadium complex listed above. Moore led App State to three straight national championships, winning all three of them, and was inducted into the College Football Hall of Fame in 2014.

Kidd Brewer Stadium has been the home of App State football games since 1962, and has hosted other events like a Luke Combs concert in 2021, a Dierks Bentley concert in 2012, a Mary Chapin Carpenter concert in 1999 and more.