“Love and Information” an experimental drama 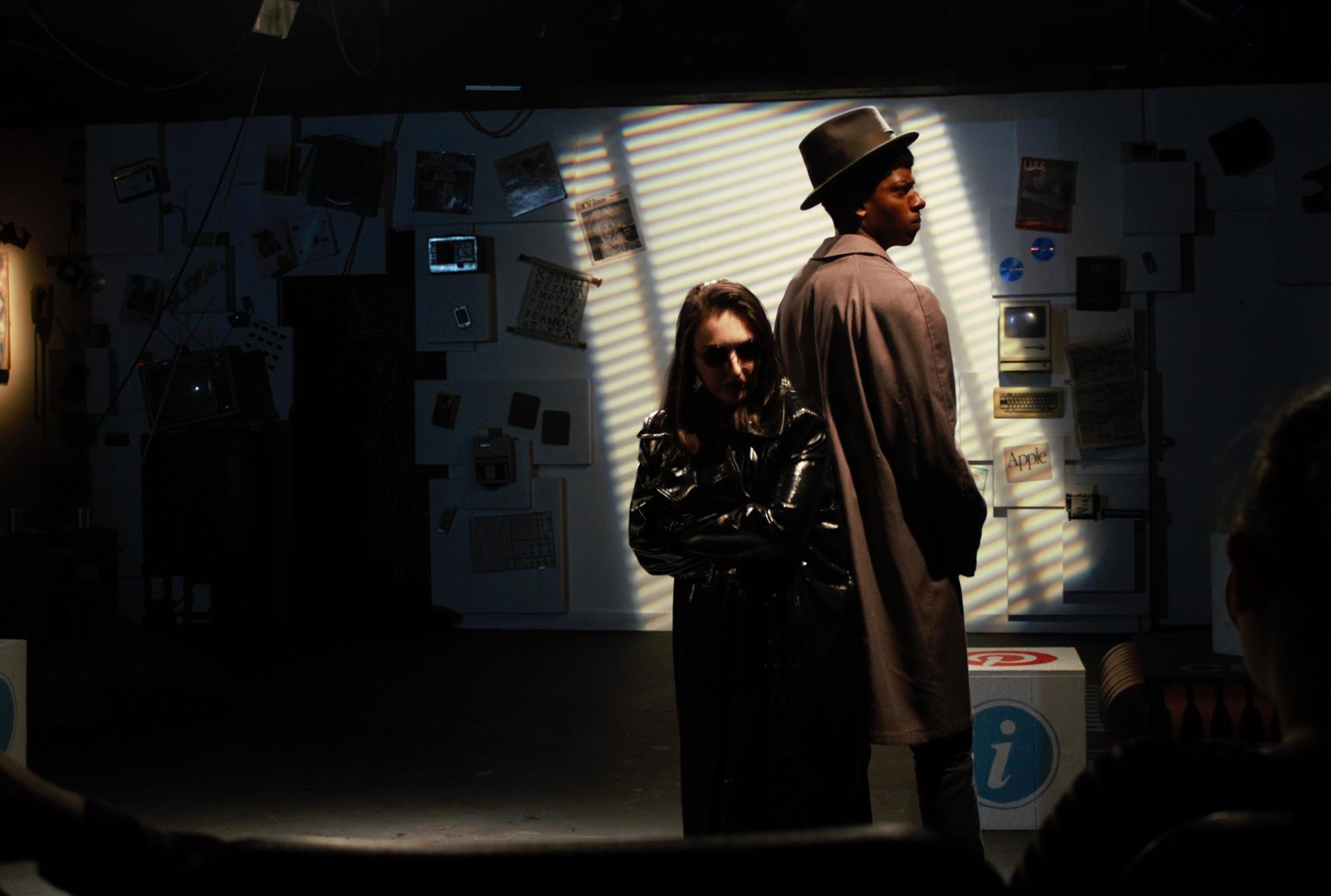 Actors discuss an affair in "Love and Information."

Actors ran off and on the stage, flipping through personas of clowns, torture victims and teenage girls in a series of short skits during their performance of “Love and Information” on Nov. 2.

“Love and Information” is a play written by Caryl Churchill and was first performed in 2012. The play is composed of seven set chapters, each composed of smaller vignettes that can be placed in any order within their assigned chapter. Further, the play has over 100 characters but no names, allowing actors to be double cast, and little to no stage directions.

In this production, 16 actors took on the parts of these characters, with each role spanning a few minutes or even a few seconds over the course of the play. Derek Davidson, a senior lecturer at Appalachian, directed the play with the help of dramaturg Sophia Mosby, a sophomore double majoring in literature and theater.

Preparing a play with no true characters, plotline, or predetermined chronology was an interesting challenge, according to Davidson.

“This is something I’ve never done before: we worked for a week and a half before we even cast it,” Davidson said.

He said in the play’s first production, the original director carried out the same strategy before casting his roles. Davidson’s cast read, experimented and researched long before they were even given parts, tinkering with what would best create the performance they were looking for.

This collaboration between the cast and the director was one of the many unique aspects of this play’s production, Davidson said. As much of the play was left to be interpreted by the director and actors within each production, there was much room for experimentation. The actors took advantage of the adaptable script, brainstorming new interpretations and ideas for how to present each scene.

“My favorite moments are almost always the moments that they themselves have come up with,” Davidson said. “They’re the geniuses doing the hard work on stage, I just select, say ‘Oh, that’s really good.’”

Before working with the cast, however, Davidson knew that he wanted the play to examine technology’s influence on love and information in our society.

“It’s something that interests me, being immersed, sort of submerged and drowning in an information saturate world,” Davidson said. “We have these devices; people could be plugged in 24 hours a day, and often are, and not just to one thing, but a multitude of things, images and sound and advertisements and commercials, and they’re breathing a thick fog of it.”

As the play has no props or setting, Davidson worked to incorporate the use of phones, computers and other pieces of technology, and even set up one scene to be carried out completely over Skype call, with one character speaking to another via a projection on the stage’s back wall.

Helping Davidson to piece together the puzzle of the play’s loose narrative, Mosby worked to interpret the play’s chapters and helped the actors understand the more complex minutiae of the piece.

“The director and I worked together to identify why they were split in seven chapters and the main themes of each of the seven chapters, that you don’t really get if you’re watching the play, but it adds to your understanding of the play,” Mosby said.

“Love and Information” was Mosby’s first play as a dramaturg, which made her first experience particularly different from one she would have had were she a dramaturg for a play with a more typical narrative, an opportunity which Mosby enjoyed.

“If you do [dramaturgy] for Shakespearean stuff, you’ll often just do a lot of bookwork,” Mosby said. “But here I can work with all these allusions and figure out why that was referenced in here and why this play is structured the way it is. It gave me a lot of options.”

As with the actors and the director, Mosby appreciated the open-endedness of the play and the potential that this freedom allowed both as a member of the production team and as a viewer. She said  the play was special in that, “It’s up to the audience to decide what they take away from it, what lines stick out to them and what out of this presentation of information resonates with them.”

The adaptability and vagueness of this play also opened up opportunities for scene experimentation, and actors’ suggestions had noticeable effects on the performance, according to actor and sophomore theater major Kaitlyn Lyon.

In one story, a man who has recently been fired from his job confronts his former boss. While the employer is dressed in formal business wear, the instigator dons a clown costume and, at one point, squeaks his nose in the midst of an otherwise serious and even violent altercation.

The scene did not dictate a clown, but actor Ian Lawrence wanted to be one and the scene worked, Lyon said.

“It’s so open-ended that you don’t really know the context for any of these scenes, or much about the person you’re playing, so as an actor you have so much wiggle room,” Lyon said. “And that’s what made it really fun, that we could’ve proposed any idea we wanted to Derek and he would’ve said, ‘Try it out,’ because there’s no right or wrong in this.”

Lyon said that this was by far “the weirdest script” she’d been handed in her life. She said the random, short scenes and unusual structure posed some difficulty for her and described the performance as “a process of putting on the hat and then immediately dropping it after that scene is finished and putting on a different one.”  She said that there was a challenge in that she had to be very conscious of everything she did between each character.

Despite the effort the innovative show required, Lyon expressed great adoration for the piece, and described it as, “really freaking cool.”

The show runs through Nov.11 and is performed in the I.G. Greer Studio Theater. Tickets are $5 for students and can be purchased online or at the box office.