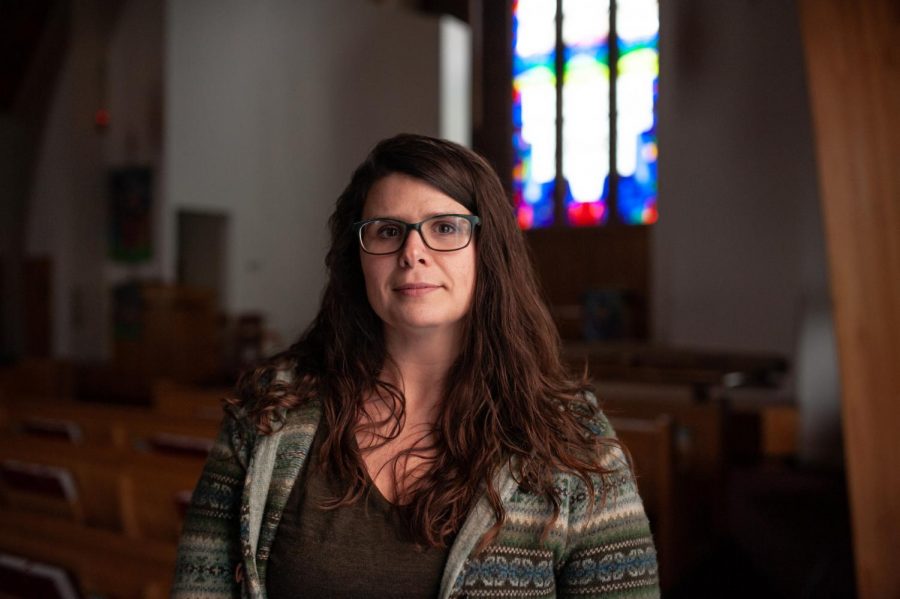 Stacey Troisi works as a campus minister for Grace Evangelical Lutheran Church. Troisi feels that "less and less people are joining the church, and more and more people are leaving the church,” and that going to church might not be "as important as it used to be.”

Inside a small, white room sits a collection of mismatched memories: board games, a blue couch, books, a rocking chair and a banner that hangs on the wall with colorful handprints surrounding the words “Lutheran Students of Appalachian.”

The room, part of the Lutheran Council House at 139 Tracy Circle, is the campus ministry LSA’s home, a space where the ministry makes connections and feels comfortable. On Wednesdays, about 20 members of the ministry join together to celebrate God’s word and love, LSA president Faith Goyne said.

Vice president of communication for the group, Matthew Chapman, said the small-group atmosphere brings a family aspect that is hard to find elsewhere.

“Being able to come to a place where you know who’s going to be there week in and week out allows you to open yourself more to talk about whatever may be going on in your personal life,” Chapman said.

Together, the students go through a rotation of activities from week to week that mimics the pattern of Sunday church services: gathering, word, meal and sending.

The group does activities such as cook meals together, play games, study the Bible with a church pastor or even bake cookies to give back to the community, junior recreation management major Chapman said.

Beyond the small, tight-knit feel of LSA, the group is also open and affirming. The ministry aims to share their experience with everyone regardless of sexuality, race, age, physical and mental abilities and beyond, junior biology major Goyne said.

The ministry currently has multiple denominations in the group, including Lutheran, Baptist and Presbyterian, and is always open for more diversity, Goyne said.

“What’s more important to us is the relationships that we build together, whether that be Lutheran to Lutheran or Lutheran to whoever you might be,” Chapman said. “We just want to have a safe space where we are all Christ-centered.”

LSA officially became open and affirming around fall 2018. This inclusivity is especially important as App State grows to almost 20,000 next year, Goyne said.

“App is a condensed campus, but we are still a large school,” Goyne said. “You can get lost in a sea of people, and having a religious group to go to is something a lot of people can connect with.”

Campus Ministry Coordinator Deacon Stacey Troisi works closely with LSA. She said the welcoming nature of LSA is noteworthy because making the transition from high school Lutheran organizations to college can be difficult.

Often, local Lutheran churches have prominent youth ministries, and North Carolina has a large youth presence in the NC Synod, an organization affiliated with the national Evangelical Lutheran Church in America, which holds conventions and events.

“It’s nice to have a place where you feel welcome and you belong,” Troisi said. “A place where you can be part of the daily life of the church and you’re not just some young person showing up to church on Sunday morning.”

While the young ministries have large numbers, many Protestant denominations are seeing their congregations decrease across the nation, Troisi said, and LSA has always been a relatively small ministry at App State.

The Lutheran church’s affiliation with App State has a long history, with an estimate from office documents showing documentation from 1923 when App State was a teachers’ college. In the future, LSA hopes to continue building relations through working with other campus ministries and organizations, including the Women’s Center and LGBT Center, Goyne said.