Making masks for a difference: sewing machine inspires student to give back 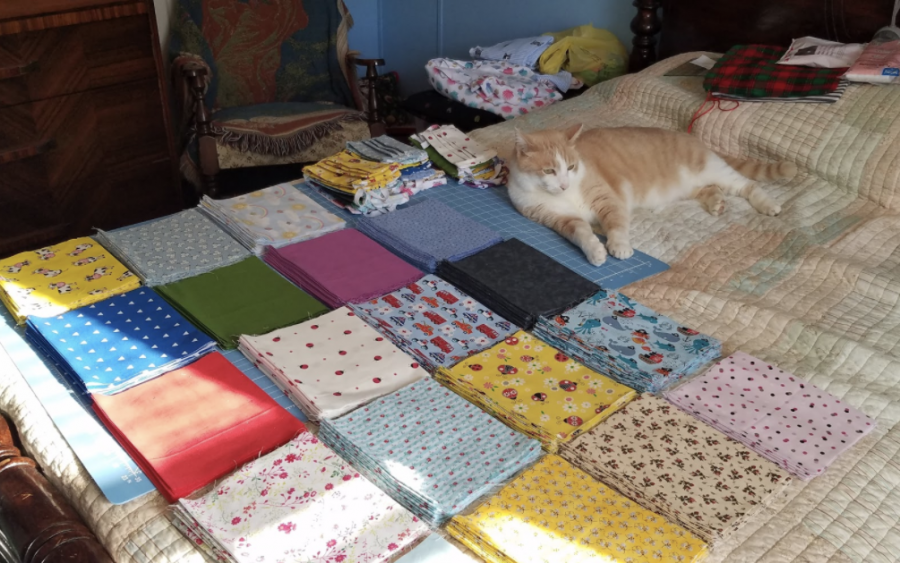 Michaela Blanchard, senior commercial photography major, is making masks each week to donate to the elderly and local medical facilities.

After losing two jobs because of COVID-19, an App State student is balancing school, taking care of her family and making approximately 170 face masks per week to deliver for free.

Michaela Blanchard, a senior commercial photography major, said she found her sewing machine while moving out of her Boone apartment and decided to make face masks.

Blanchard, who said she learned to sew about a year and a half ago, saw Facebook posts made by others crafting masks and decided to try it.

“I have tubs and tubs of fabric in my closet that wasn’t being used, so I thought I’d put it into good use,” Blanchard said.

The fabric Blanchard uses for the masks is 100% cotton, and the ear loops are an elastic knit, Blanchard wrote in an email.

Blanchard delivered her first masks to some of the elderly community in her hometown, Bailey. She drops the masks off in customers’ mailboxes to avoid risk of illness.

“These are people that I’ve known for a long time,” Blanchard said. “I want them to be safe. I don’t want anything to happen to them or any of their family.”

Blanchard was furloughed from her job at Arby’s due to coronavirus, she said and she isn’t able to work her second job on-campus due to App State’s transition online.

“I know it’s hard right now for people to try and pay for things like this,” Blanchard said. “I figured, you know, I have the fabric already; it’s not costing me anything other than gas and shipping to help people.”

After her first delivery and posts on Facebook, the demand for Blanchard’s masks grew. During the last week of March, Blanchard delivered 60 masks.

Blanchard said she tries to mass deliver if she has multiple orders from a specific community. She said this saves time and gas money, and allows her to keep her customers informed on delivery times.

Blanchard also delivers to hospitals that are running low on masks. On April 7, Blanchard delivered 75 masks to Nash UNC Health Care Hospital and 50 masks to the PAM Specialty Hospital of Rocky Mount, she wrote in an email.

Blanchard lives with her father, who recently suffered a work-related injury, and her grandmother, who has underlying health conditions. Blanchard said she has made 234 masks as of April 8 while trying to take care of her family.

Sally Chapman, Blanchard’s boyfriend’s mother, said she ordered five of the masks for members of her family who may be at a higher risk due to their workplace or medical conditions.

Chapman said her family members were all very pleased with the quality of the masks.

“They’re really good quality,” Chapman said. “I’m not a professional seamstress, but I thought she did a really good job with them.”

Chapman said she particularly likes the masks’ durability. After hand-washing her husband’s mask with dish soap and letting it air-dry, the mask didn’t show any signs of damage, she said.

Through her posts on Facebook and word-of-mouth, Blanchard has also received orders from customers in other states. Blanchard said she has shipped orders to Upstate New York and Virginia Beach.

“I’m shipping everywhere,” Blanchard said. “People send me their address, I’ll send masks to them … if I can’t deliver by car.”

Chapman said she thinks the pandemic has shown people’s “true colors,” in regard to Blanchard’s efforts.

“If somebody is willing to do something for absolutely nothing for anyone that needs it, it’s got to make somebody feel good,” Chapman said.