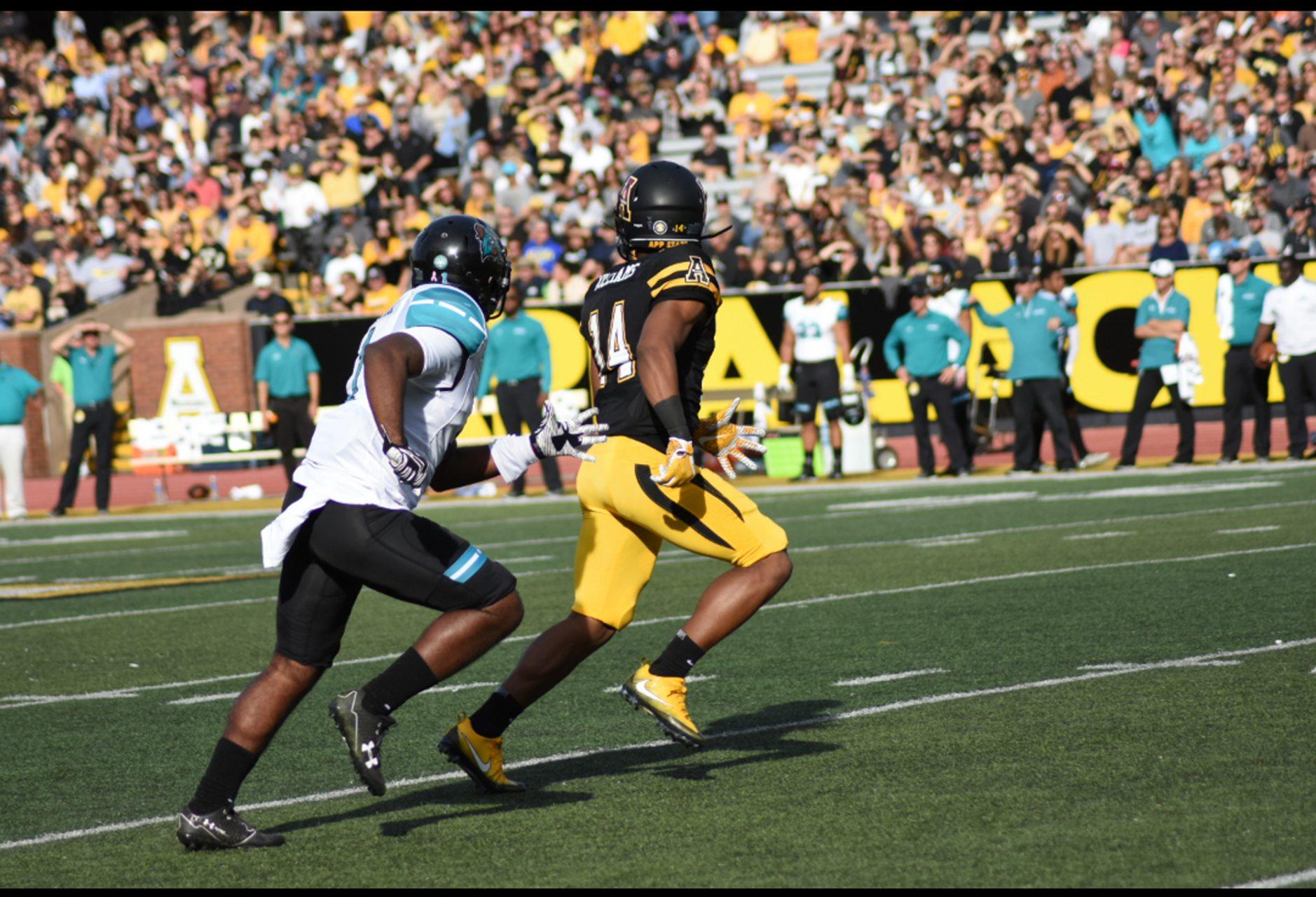 Junior wide receiver Malik Williams going out for a pass against Coastal Carolina. Williams has shown improvement each of his three seasons as a Mountaineer.

Last season, Malik Williams was known as a big play receiver in App State’s Sun Belt leading offense. This season, as a junior, he has emerged not only as a player who has a knack for big gains, but also as a consistent pass catcher through six games. After recording only 23 catches for 257 yards in the 2018 season, Williams has 26 receptions for 312 yards already.

“I’ve worked on my route running, getting separation from (defensive backs) and making sure I catch the ball every time, not just looking for the big play,” Williams said.

Williams is second on the team in catches so far this season, with only junior wide receiver Thomas Hennigan ahead of him. The App State receivers have combined for 85 of the teams 100 catches. Since leading junior receiver Corey Sutton returned against North Carolina in week four, Williams’ production has increased, along with Hennigan’s. All three have double-digit receptions, making it easy for junior quarterback Zac Thomas to spread the ball around.

“We know what we have when we play with each other; we have that bond, and against every team, we play the same way we’ve been playing. We know we have a great receiving core,” Williams said. “You key in on one of us, then the others are going to show out.”

Head coach Eliah Drinkwitz said he knows the depth his team has at the wide receiver position.

“Our guys know that we believe in all of them. It’s who performs throughout the week at practice that determines who gets those looks,” Drinkwitz said.

Williams continues to earn looks from Thomas through hard work. He has seen playing time throughout all of his three years as a Mountaineer. His freshman season he recorded 19 catches, improving that by four last year. This season, Williams is on pace to double the amount of receptions he had last season.

One of the more important jumps Williams made, beyond catching the ball, is as a blocker for App State’s running game.

“We know what we have at the running back position. O-line blocks for first down; we block for touchdowns,” Williams said.

Williams and his fellow receivers have helped form one of the most dangerous offenses in the country, and they are a big part of the reason App State is ranked No. 21.

Williams knows how well he and his teammates are doing, but he also knows they are hungry to achieve even more.

“We have to continue to take it week by week,” Williams said. “Study our opponent and keep doing what we do. We know how good we are.”