Mann-Fix Learning One Step At a Time 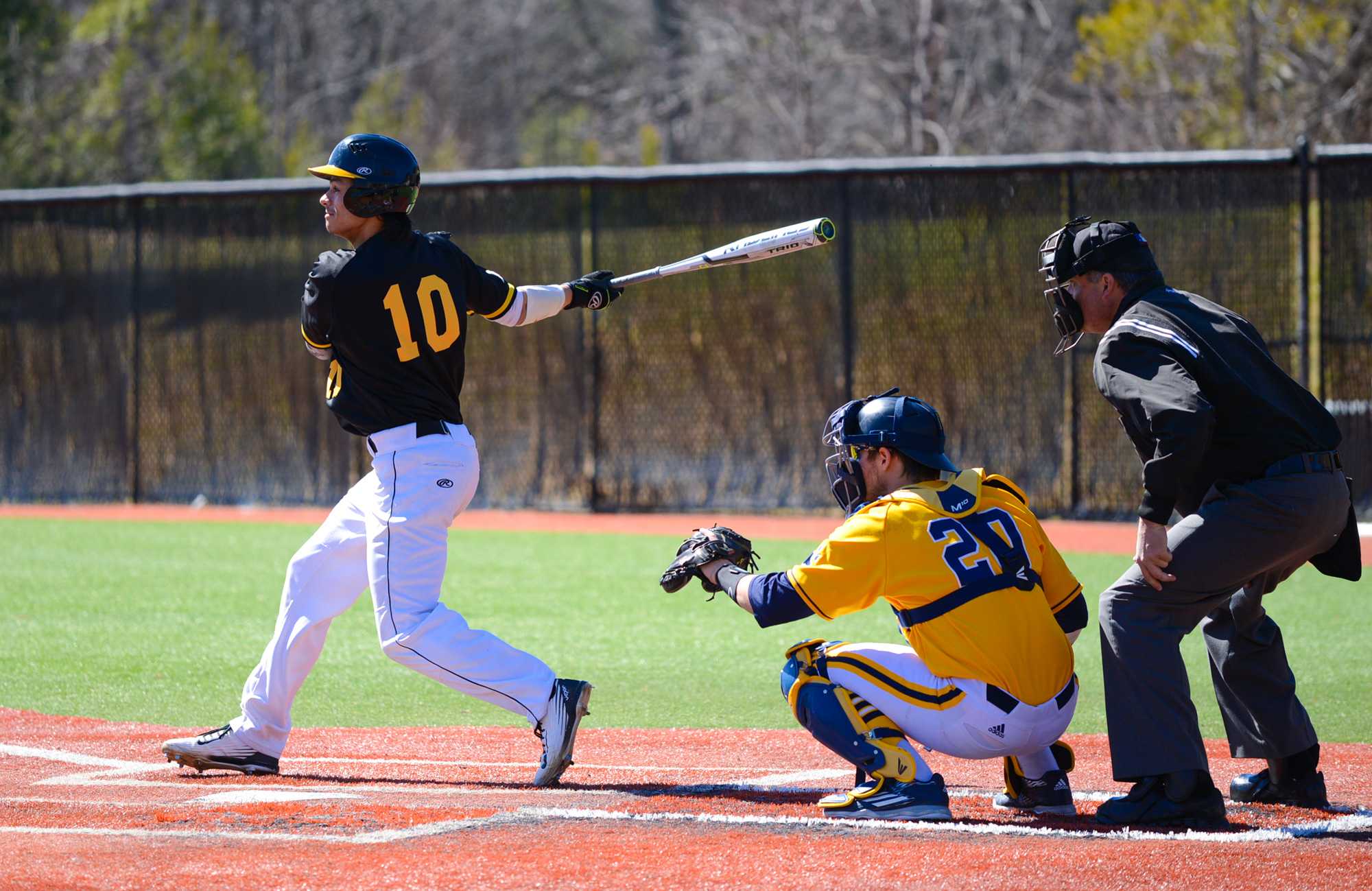 Freshman outfielder Tanner Mann-Fix completes his swing followed by a slide to third base on February 28 against Quinnipiac. Photo by Dallas Linger.

For freshman center-fielder Tanner Mann-Fix and Appalachian State, it was love at first sight. Mann-Fix visited the campus for the first time in his freshman year of high school during a baseball showcase and has been enthralled ever since.

“The first couple of times I visited, I would always take my phone out and take pictures,” Mann-Fix said. “It is just a great place to be and a great environment.”

Throughout his high school career, Mann-Fix was a .420 hitter and all conference honoree. He also played football the first few years of high school but decided to focus strictly on baseball.

App State baseball coach Billy Jones attended some of the showcases that Mann-Fix was in and immediately noticed Mann-Fix’s solid hitting, fielding and speed. Shortly after Jones watched Mann-Fix compete in Boone, he began the recruiting process and Mann-Fix became the first 2015 commit for the Mountaineers

“With us losing Jaylin Davis, we needed a guy to play center field,” Jones said. “We have Brian Bauk in the outfield but we now can keep him more healthy and keep him in right-field.”

The presence of Mann-Fix had been felt immediately through the first part of the season at the plate and in the outfield. Mann-Fix, who has been the team’s lead-off hitter, currently leads the team with a .311 average through 103 at bats and has started 24 out of 27 games played.

Despite the success, the learning curve for adjusting from high school to college still exists. Mann-Fix faced a tall task adjusting to college ball, being a left-handed hitter which can be much more difficult to learn how to read pitchers. Throughout the summer he was able to work with coaches on hitting as a left-hander with different adjustments.

“The college game is a lot faster and it doesn’t give you any type of breaks really,” Mann-Fix said. “It is definitely something where you learn to have a short memory because it can be a stressful game and is a game of outs.”

Junior outfielder Bauk has been one of the veterans on the team who has taken notice of Mann-Fix’s fast start and the impact he has already made on the Mountaineer team.

“It is always helpful to have a guy hitting above .300 and having a big bat in your lineup bringing power and good fielding,” Bauk said. “He has really helped us out a lot. We didn’t think we would get as much out of him as we have.”

Bauk, who is third on the team in batting average and rated as a top Sun Belt conference MLB prospect, not only has tried to work with Mann-Fix, but all 14 freshman on the roster.

“I thought I could’ve been helped a little more as a freshman, so whatever I didn’t quite learn is what I am trying to help the freshman with,” Bauk said

Despite the Mountaineers struggling some in the standings, Mann-Fix has been able to rely on every single player on the field. He said that whether he looks to his right or left, he knows his teammates and coaches have his back just like he has theirs.

“He is a good teammate, likes to play and loves to win,” Jones said. “He will be in the dugout no matter the score and he is very, very competitive.”

As opposing teams are now beginning to learn and watch Mann-Fix’s style of play when scouting teams, they have started to pitch against him better.

“The college competition makes it a little bit more difficult than high school, but that is what makes it a lot more fun,” Mann-Fix said. “I am a competitor like being out competing with the guys on my team.”

Jones acknowledges that it is all part of the freshman learning process.

“He hits his speed bumps like every freshman does,” Jones said. “He has to learn to make adjustments which is a process.”

Just beginning a bright career, Jones said as long as he stays focused, he will be a key building block on a young Mountaineers team.

“He has to take care of athletics, classes and being a student-athlete which is not an easy thing,” Jones said. “He has the same challenge as everyone else, but if he handles his business and does his work, he can be good for a long time.”