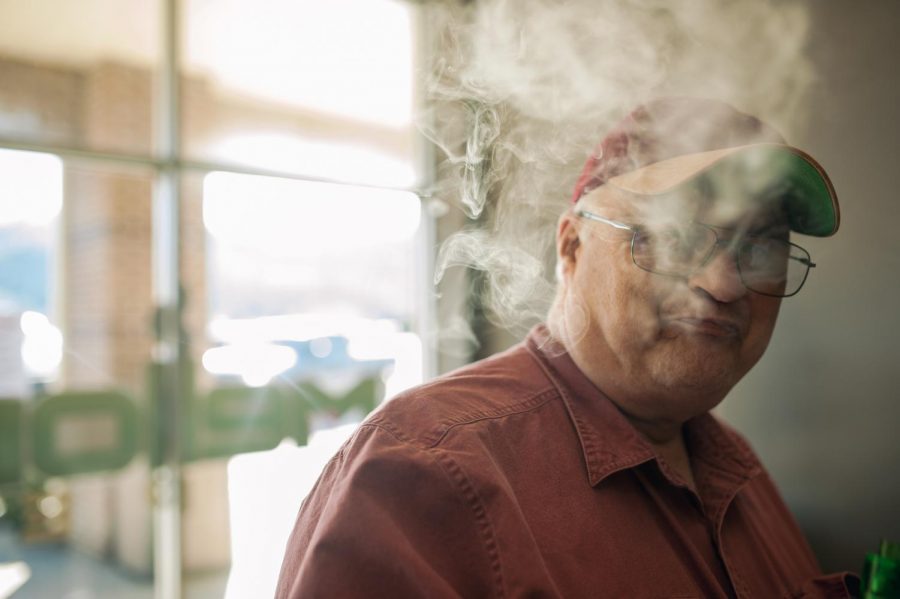 Michael Deck, a retired veteran, took up vaping to limit his reliance on cigarettes. He said 17 and 18-year-olds should be able to use tobacco products considering they can go into basic training and die for their country.

As the popularity for many “new” tobacco products, like electronic cigarettes, increased, so did the age to buy them.

President Donald Trump signed legislation that raised the minimum age to purchase tobacco in the United States from 18 to 21 on Dec. 20. The change comes after a series of vaping-related illnesses among teenagers over several months.

“It was kind of like, ‘Oh, OK. I know I just served you yesterday, but we definitely can’t now,’” Parrish said.

Parrish said her store was told to turn people away who weren’t 21 and switch signs that previously stated the legal age to purchase was 18 for those that state it is 21.

“I feel like a lot of people, you know, will definitely try to stay off the nicotine addiction and maybe become even healthier for themselves,” Case said.

Case said he has friends who may have to quit using their nicotine and tobacco products because they are about to “run out” and aren’t of age to purchase more.

According to the Centers for Disease Control and Prevention, in 2019, more than one out of every four high schoolers, 27.5%, reported using an e-cigarette in the last 30 days.

“First, I thought I was gonna quit because I’m not 21,” Parillo said. “Then I figured that being in school and having all of this crap I have to deal with, you kind of need something to take off the edge.”

Ben Asma, substance abuse counselor and assistant director of Wellness and Prevention Services, said most students he sees with nicotine addictions begin using the products socially, and end up wondering, “‘How did I get here?’”

He said Wellness and Prevention prefers to have a holistic conversation about the pros and cons of using nicotine products, like the financial and physical tolls it can bring, as opposed to offering advice.

“You know, a lot of people are essentially working to smoke or working to use because it does add up and costs so much over the course of time,” Asma said.

Parrish said she thinks those who were previously using tobacco products will now find 21-year-olds to purchase the products for them.

Parrish did, however, say she thinks the new law will have an impact on high school campuses.

Parillo said he thinks he and others who fell between the ages of 18 and 21 should have been grandfathered into the change, meaning the law wouldn’t impact those who were already 18 or older. Parrish disagrees.

“How are you going to know who was originally vaping? If there was a very easy clear way to do it, they probably would have, but they couldn’t think of anything and neither can I,” Parrish said.

Michael Deck, a retired veteran and patron of Mellow Vapes, said he thinks it’s silly 17-year-old kids can go through basic training and die for their country but can’t smoke.

Asma said the change is an “upstream” approach to the issue of tobacco.

“We want to create a better community and environment that reduces the access and availability of nicotine, a very highly addictive chemical, from getting in the hands of individuals who may not be able to have the forethought of what this is going to mean in their lives,” Asma said.

Asma said the step is one he and other professionals in his field have been paying close attention to.

“I’m very proud of our government for taking a big step and going against essentially like big tobacco or big corporations, and making a stand up of what’s best for our communities and in society at large,” Asma said.