Marching Mountaineers bring music back to the mountains 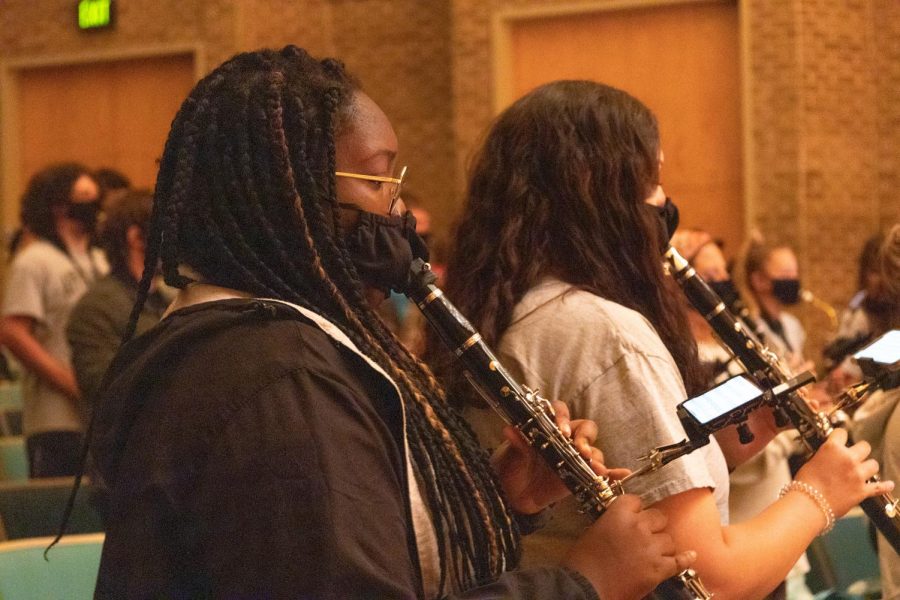 The Marching Mountaineers practice in Broyhill concert hall on rainy days to prepare the clarinets, flutes, and other brass instruments for upcoming home games Oct. 20 and 30.

After not performing in the 2020-21 football and basketball seasons due to COVID-19, the Marching Mountaineers are honoring essential workers in their three halftime shows this year.

The band’s first performance was at the Bank of America Stadium in Charlotte Sept. 2, followed by two home games at the Kidd Brewer Stadium Sept. 18 and 23.

“We understand that in the grand scheme of things, not being able to put on a marching band show wasn’t the most important thing that was lost last year,” said Jason Gardner, director of the Marching Mountaineers. “And so we wanted to acknowledge that, and also acknowledge everyone who sacrificed a lot.”

The halftime show begins with a thank you to health care workers, police officers, firefighters, truck drivers, the military and other essential workers with a series of songs including “Help” by the Beatles and “Not Afraid” by Eminem.

The band then played a medley of “Amazing Grace” and “You’ll Never Walk Alone” from the musical “Carousel” as a reminder that everyone is in this pandemic together, according to Gardner.

So far this season, all performances included the same songs, and as a special addition Sept. 2,  App State and Eastern Carolina’s bands came together and performed James Taylor’s “Carolina in My Mind,” creating the shape of North Carolina on the field.

“It was just a great opportunity for us to come together and celebrate the state that we’re both a part of,” Gardner said. “It was happy feelings all around.”

Joe Busuito, director of athletic bands at ECU, said he and Gardner have known each other since going to school together in Illinois, and they began planning for the Sept. 2 performance last spring.

Busuito said marching bands at football games is an old tradition, and this is a great way for schools and students to learn that despite there being competition, it “doesn’t always mean that we are opposed in everything that we do,” especially being in the neutral site at the Bank of America Stadium in Charlotte.

Hours before the game, both bands gathered together at a park several miles from the stadium and rehearsed their performance for two hours, though Busuito said for a halftime show, it normally takes an average of six to 12 hours to put together.

“Band is a place where magic happens,” Busuito said. “It was really great to work with students at App State. They couldn’t have been more friendly. I loved seeing them interact with our students. That was a great moment.”

Sophomore music education major Hailey Walker described the echo after the cutoff at the end of the two bands’ final rehearsal at the park as a “chef’s kiss.”

“Oh my gosh, it was incredible,” Walker said. “The way it just reverberated hit all of us. It went on for a pretty good while because of how crisp the soundwaves were at the end of it.”

Gardner said the theme for the Oct. 20 home game will be “Women and Rock,” featuring artists like Aretha Franklin, Tina Turner and Lady Gaga.

There are 254 members of the Marching Mountaineers, and Walker is one of the 190 students who publicly performed with the band for the first time this year.

Walker said performing in front of so many people at the Sept. 2 game was “absolutely surreal.”

“There were definitely nerves, but I think adrenaline kicked in over it,” Walker said. “There was more excitement than anything when we were on the field especially, actually getting to have a crowd reaction because a lot of us haven’t heard applause when we’re performing in two years.”

Junior music education major, Sean Andrade, started marching with the band in 2019 and has not played for a crowd in over a year. He said he enjoyed interacting with fans at the game.

Andrade recalled how one fan came up to him and said they’d gotten season tickets for 2020 but only went to two football games because, without the band, it didn’t feel like they were at a college football game.

“It was really nice to see that people cared that we were back on the field performing for them again,” Andrade said.

Despite the band being the largest student organization on campus, Andrade said the majority of the team is vaccinated.

Regardless of vaccination status, the Marching Mountaineers still follow guidelines from the College Band Directors National Association, which has been conducting studies since March 2020 to regularly provide guidance on the safest practices for bands.

Gardner said some of the COVID-19 protocols the team has followed this year include remaining three feet apart on the field, restricting the number of people indoors together and limiting the amount of time spent indoors practicing to 50 minutes at a time.

Recently, Gardner is requiring all members of the band be tested every week on campus, following a string of five positive cases throughout the month of August, one following the ECU game and four more positive cases by Sept. 9.

In order to perform at football games, Gardner said students either have to be vaccinated or provide proof of a negative COVID-19 test within 72 hours of the game. Gardner estimated that three to four students had to miss both the season opener Sept. 2 and the home game Sept. 23 against Marshall.

“Just getting to be with the fans, back in that game day atmosphere gave some people in the band a lot of hope that we can get back to this safely,” said Topher Kane, senior music education major.

Even including the band’s performance at the Caesars Superdome in New Orleans for the bowl game in 2019, Kane said performing at the Bank of America Stadium was the largest crowd they have played in front of and added that the crowd’s reaction to their pregame show was a highlight for the band.

Gardner said fans in Kidd Brewer Stadium were very responsive to the pregame show for the two home games as well.

“I think it was really apparent that the crowd missed being there just as much as the band missed being there,” Gardner said. “There’s a lot of energy, a lot of buzz in the stadium. So that’s a really cool, palpable thing that happens during the game.”

Gardner said the band is continually getting stronger throughout the season, and the students love the excitement from the crowd.

“Getting that support from the fans means a lot more than some people might think,” Kane said. “I’m a firm believer that the band is a part of the team in a way. We’re kind of their hype people. And the crowd’s interaction with us is something that definitely helps us with that.”