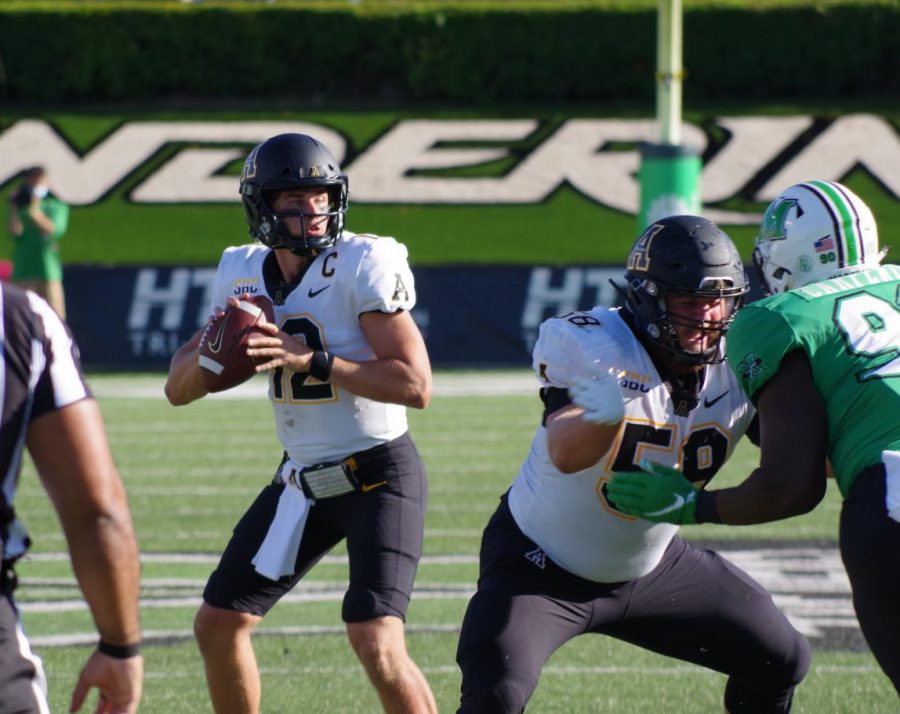 App State senior quarterback Zac Thomas looks down the field for an open receiver against Marshall. Thomas threw for 268 yards and one touchdown in the 17-7 loss.

In a low-scoring affair plagued by penalties and mistakes, the Marshall Thundering Herd was too much for the No. 23 Mountaineers, who lost 17-7 Saturday afternoon in Huntington, West Virginia.

“I’m proud of the way we competed, but again, we can’t shoot (ourselves) in the foot,” head coach Shawn Clark said. “We couldn’t run the football today. That’s been our bread and butter for a long time. Hats off to them.”

On the opening kick off, App State was called for a face mask that put the Thundering Herd near the 50-yard line.

Six plays later, Marshall scored on a 2-yard rush from redshirt junior running back Brenden Knox to take a 7-0 lead.

App State tied the game on the next drive, marching 85 yards in just over 5 minutes. The drive was punctuated with an 11-yard touchdown pass from senior quarterback Zac Thomas to senior wideout Jalen Virgil. After the extra point tied it up at 7, the Mountaineers didn’t score again.

In the second quarter, App State and Marshall were back and forth — neither team finding the end zone. With 2:28 left in the first half, Marshall hit a 29-yard field goal, putting the team up 10-7.

On the ensuing drive, the Mountaineers quickly moved downfield to the Marshall 19-yard line, with the help of 50 yards in penalties called on the Marshall defense. With the end zone in sight, junior cornerback Steven Gilmore intercepted Thomas, giving the Thundering Herd a 10-7 halftime advantage.

The Thundering Herd extended its lead late in the third quarter after redshirt freshman quarterback Grant Wells hit senior tight end Xavier Gaines for 67 yards. On the next play, Wells took it himself for a 12-yard rushing touchdown.

Early in the fourth, Clark opted to leave the offense on the field for a crucial fourth and 1 at the Marshall 46-yard line. Thomas found senior tight end Mike Evans open across the middle for a 41-yard pickup, but Evans lost the ball right before he reached the goal line.

Marshall recovered the fumble with its 10-7 lead intact.

App State didn’t get close to the end zone again until less than 4 minutes left in the game, down 10 points.

The Thundering Herd stopped a 77-yard App State drive just 9 yards from the end zone. Senior kicker Chandler Staton came out to attempt the field goal to bring the Mountaineers within a possession, but missed wide right.

“We gotta go back, look at the tape, do better next week and fix what we messed up on,” senior center Noah Hannon said.

The Thundering Herd took over and ran the clock down to less than 30 seconds before punting.

With 20 seconds left, App State could not find the end zone. The last time App State scored less than 10 points was a 45-6 loss in 2013 to Georgia.

A number of App State faithfuls spread throughout the stadium, and made their voices heard.

“Every time we made a play, we heard them,” junior cornerback Shaun Jolly said. “We feed off that energy. We love our fans.”

“We’re a relentless group,” Hannon said. “This is not something that’s going to define us.”