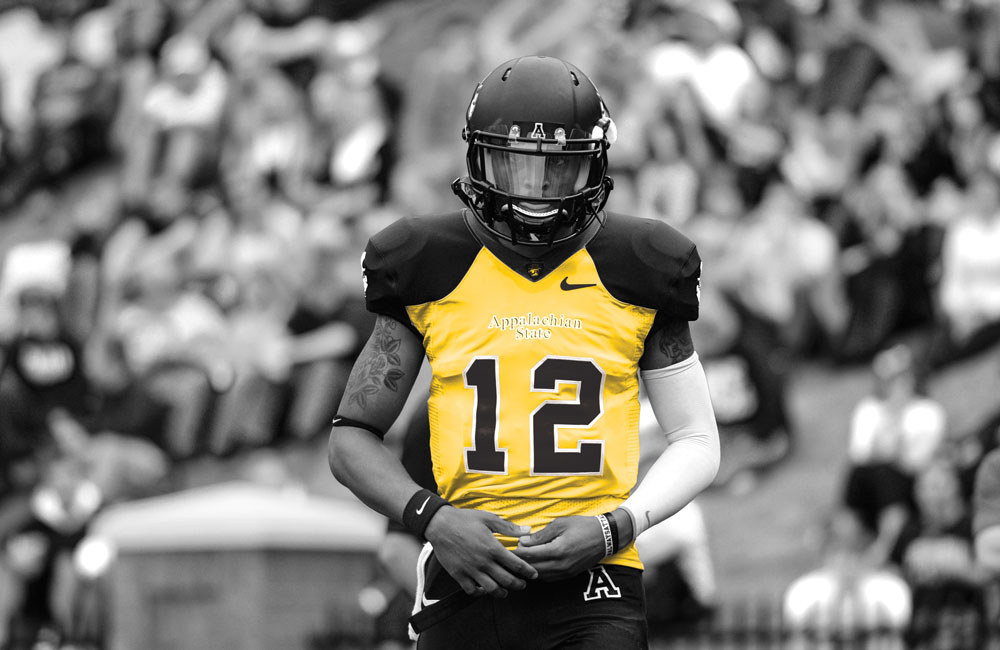 Former App State quarterback Jamal Londry-Jackson mentally prepares himself for a play in a football game for the Mountaineers during the 2013 season. The Mountaineers will play Michigan for the second time in seven years Saturday. Photo by Justin Perry | The Appalachian

The Matchup
The Michigan Wolverines and App State Mountaineers will meet for the first time since the historic upset in 2007 that saw Armanti Edwards lead App State to a 34-32 win in Ann Arbor, Michigan.
Fast forwarding seven years, a lot has changed for both programs. The game will be App State’s first in the FBS as a member of the Sun Belt Conference, and rather than the success it was enjoying the last time these two teams met, the Mountaineers are fresh off of a 4-8 campaign, including a 2-4 mark away from home.

On the other side, Michigan, which was ranked No. 5 overall in 2007, enters this season unranked after an underwhelming 7-6 finish last season including a 3-5 mark against conference opponents and a 1-2 record against FBS top 25 teams.

How App State can win
The Mountaineers will undoubtedly have to endure an early push from the Wolverines. Michigan will be hoping to take an early lead and take any momentum away from App State from the opening kickoff.

Redshirt junior quarterback Kameron Bryant will have his work cut out for him against a stout Michigan defense that is very deep, particularly in the secondary.

The Wolverines have been rotating several players at the cornerback position during fall practices in the hopes that the competition will help the unit play better. Included in that group is sophomore defensive back Jourdan Lewis, who has impressed coaches with his offseason practices.

Bryant will have to be a game manager and be careful not to gamble, particularly early in the game.

The Mountaineers, with the help of Marcus Cox, Eric Davidson, Ricky Fergerson and Terrence Upshaw, are very deep at the running back position – an advantage they should take to early by working to establish the ground game to get the pressure off of Bryant.

Defensively, the Mountaineers will have to show some physicality of their own if they are to shut down the Wolverines. Michigan struggled to run the ball last year, finishing 104th in the nation in rushing yards last season with 125.7 per game.

App State should look to commit to making the Wolverines one-dimensional by shutting down the ground game.

How Michigan can win
The Wolverines will have to take advantage of the energy in The Big House and jump out to an early lead.

If Michigan can grab the momentum and put the Mountaineers behind, Bryant will be forced into using the passing attack to keep up. Michigan’s experienced secondary should have the advantage on an App State wide receiving corps that features no seniors.

The Wolverines have not named their captains at this point. Hoke said in an interview with Michigan.scout.com that they would be voted on after their matchup with Ohio State Nov. 29. If Michigan starts off the season with a win, leadership will still come from somewhere, or at least the Wolverines should hope.

The bottom line
App State does have its hands full dealing with a talented Michigan squad, but head coach Scott Satterfield will have his team ready to play Saturday.