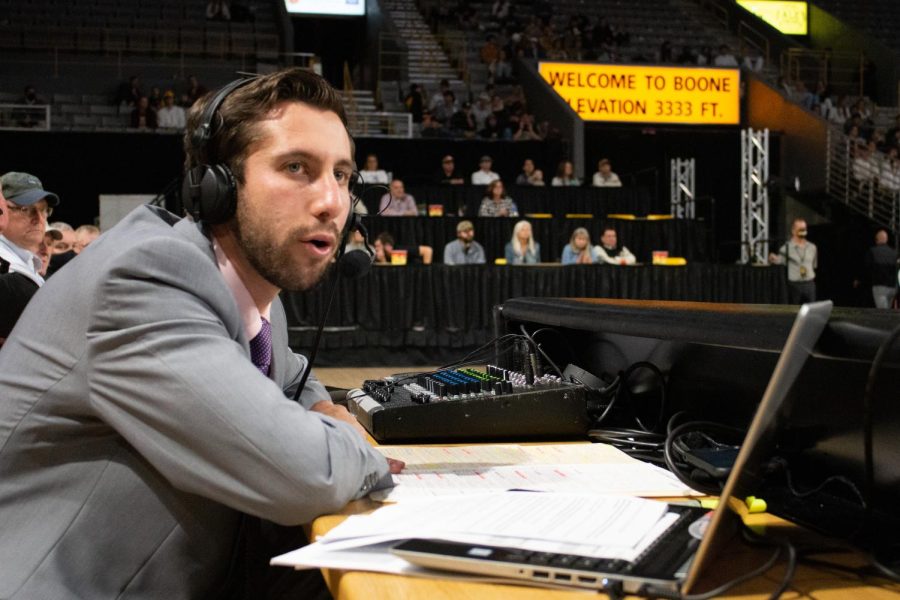 Matt Present calls the Nov. 18 matchup with Charlotte from the scorers table. Present’s second home game behind the microphone concluded in a one-point Mountaineer defeat.

There’s a new voice on radios in Boone every time App State men’s basketball plays. From calling home runs, to buzzer beaters, to touchdowns, this new broadcaster has called numerous sporting events at all different levels.

Matt Present graduated from the University of Maryland in 2016 and has experience across the sports world, from filling in as the color commentator for App State women’s basketball and baseball games to being a studio host for Learfield International Management Group College. Present also worked as director of broadcasting for the Down East Wood Ducks, the minor league affiliate of the Texas Rangers. Present remains the play-by-play announcer and does media relations for the Jacksonville Jumbo Shrimp in Florida.

“I’ve called just about everything over the course of my career, but baseball is what I’ve done the most of,” Present said. “A lot of that is the product of you playing baseball every day, since there are more games in the season.”

Present replaces Harrison Battle, who was the team’s radio announcer for four seasons before taking a different job this past May at the University of Georgia.

“I want to say thank you, App Nation,” Battle said. “For every time you tuned into a game, for your interactions in person and on social media, and for being the best, most passionate fan base there is.”

Present took on App Nation as the new men’s radio play-by-play announcer Nov. 9, when the Mountaineers traveled to Iona to open the season.

“To come aboard at such an exciting time with a team coming off a historic season and obviously moving in a really exciting season where they built to this point over the last couple of years, it’s really humbling to be selected,” Present said.

“I was fortunate enough to talk to Coach Kerns as a part of my interview process, and the biggest thing that stood out to me is the tremendous amount of belief he has in his team and the belief the players have in him,” Present said. “If you look back at how many guys decided to come back and play for Coach Kerns when they didn’t necessarily have to, because of the COVID year, shows that belief.”

This App State team faces one of its most pivotal seasons yet, coming off an NCAA tournament season, playing Duke and North Carolina this year on the road and proving to others this is not a team opponents should take lightly.

“Obviously, this is a team that went to the tournament last year, awfully close to winning a tournament game. They return five players who scored over 200 points last season, close to a dozen players in total returning,” Present said. “Not to put any pressure on them, but you have to think the future is bright.”

Heading into his first season as the team’s broadcaster, Present had one word to describe the opportunity to cover this team for the upcoming years: “Exciting.”