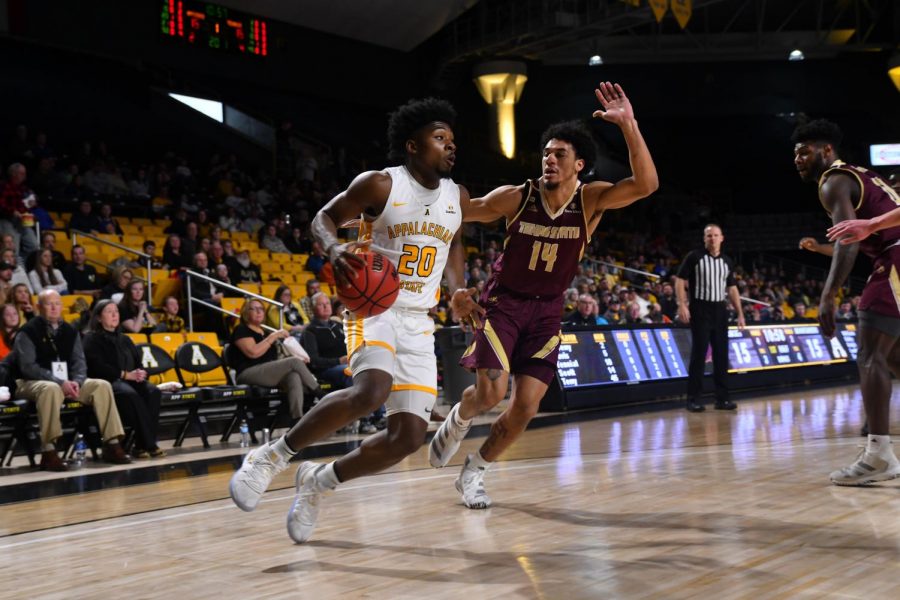 Sophomore guard Adrian Delph set a new career-high with 21-points in a comeback 62-57 win at Georgia Southern on Feb. 15.

App State (15-12, 9-7 Sun Belt) knocked off rival Georgia Southern (16-11, 10-6 Sun Belt) 62-57 on Saturday in Statesboro, Georgia, despite playing without leading scorer Justin Forrest who was a game time decision due to injury.

Sophomore Adrian Delph set a career-high with 21 points on 7-for-13 shooting and senior forward Isaac Johnson joined the 1,000-point club with a 17 point and 12 rebound performance.

The Eagles led 21-9 midway through the first half when Delph knocked down a three and a dunk to open a 10-0 run from the Mountaineers to make it 21-19 at the 6:52 mark. Georgia Southern clung to a two point 29-27 lead at the break.

In the second half, the Eagles pushed their lead to 10 points, leading 38-48 with 8:09 to play. Over the last eight minutes, App State outscored Georgia Southern 21-9. The Mountaineers tied it at 52 with 3:22 remaining when O’Showen Williams made a layup. The Mountaineers took their first lead of the game with a layup from Johnson at the 2:54 mark.

Along with Delph’s 21 and Johnson’s 17, Williams, a senior guard, scored 12 points and dished out six assists. The Mountaineers forced 16 turnovers while turning it over 11 times. App State also had 14 assists while Georgia Southern finished with just three.

With the loss at Georgia State on Thursday, the Mountaineers finish 1-1 on their trip to the Peach State and have four games left on the regular season schedule.

App State returns to action on Thursday night at 7 p.m. against South Alabama at the Holmes Convocation Center. Then, the Mountaineers will host Troy on Feb. 22 at 4 p.m.