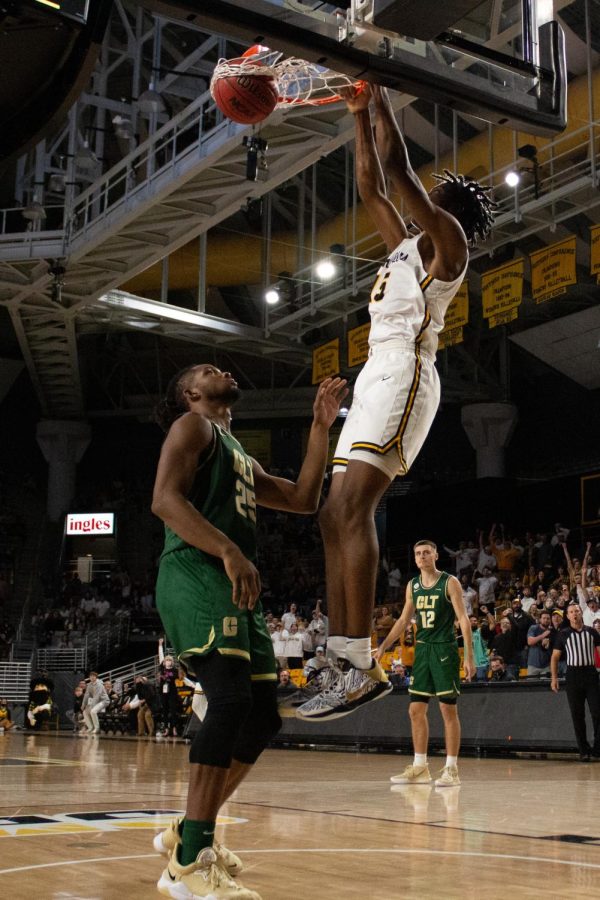 After posting a 1-2 record in the Gulf Coast Showcase, the Mountaineers returned to the Holmes Convocation Center for matchups against the Hartford Hawks and Boyce Bulldogs.

The Black and Gold were without senior forward James Lewis Jr. and sophomore guard Xavion Brown who were out with injuries.

App State controlled much of the first half, going up by 17 at one stretch before heading into halftime with a 38-23 lead.

The defense generated 13 points off turnovers while holding the Hawks under 40% shooting from the field. The Mountaineer bench contributed 19 of the 38 first half points. App State shot 51.6% from the field and 40% from three-point range.

“I was pleased with our bench play,” head coach Dustin Kerns said.

In the second half, Hartford upped its defense, extending a full court press for much of the final period. The Mountaineers shot 37.1% from the floor and only made one of their 12 three-point attempts. Eads Jr. tacked on seven second half points to lead all scorers with 20, marking a new career high.

“Just being confident and staying ready, we put in the work for it,” Eads Jr. said.

Hartford cut the lead to as low as nine but App State would hold on for the 69-59 victory. The Mountaineers improved to 4-4 on the season.

The Mountaineers started strong, taking an early 26-3 lead with 11:38 left in the first half. With Lewis Jr. out due to injury, App State’s starting lineup consisted of five perimeter players, leading to eight made three’s for the Black and Gold in the first half.

The scoring run continued throughout the first half as the lead stretched to 38-7 with 3:34 left after a fast break dunk by Huntley. The Mountaineers entered halftime with a 46-10 lead.

Not only did the team shoot an efficient 46.2% from the field in the first half, but the Mountaineers played tight defense, allowing Boyce to score only 10 points in the half and grabbing four steals in the process.

“I thought we defended the three really well,” Kerns said. “I told our guys before the game, ‘It doesn’t matter who we are playing, we’ve got to go out and build our habits and get better defensively,’ and I thought we executed that.”

The App State defense only allowed three made field goals in the final 11 minutes of the game, while the Mountaineer bench scored 37 second half points and 57 total points.

The Black and Gold have eight days off before facing Furman Dec. 10.