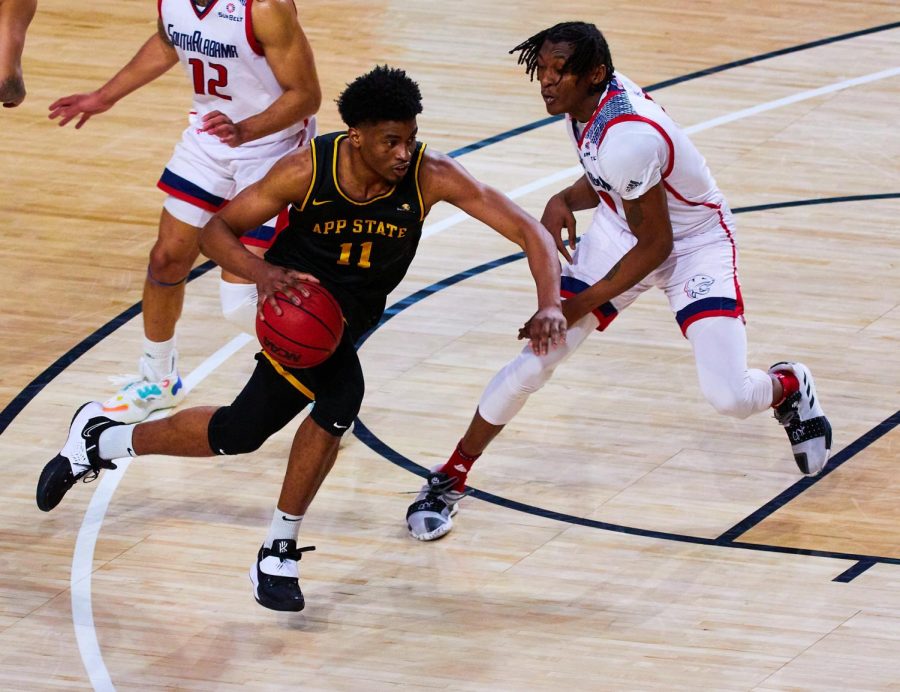 Junior forward Donovan Gregory drives to the basket in last year's home matchup against South Alabama. The Charlotte native started in all 28 games that he participated in, averaging 10.7 points and 6.1 rebounds per game on 50% shooting.

The 2021-22 men’s basketball non-conference schedule was released Aug. 17, completing this year’s full slate of games for the Mountaineers. Ten non-conference games were announced, six of which are home games, along with the Gulf Coast Showcase in late November.

“We have some exciting home games for our fans and students,” head coach Dustin Kerns said. “We also have an opportunity for our fans to travel, with our road games being mostly local against some outstanding programs. We feel this schedule will prepare us for the ultra-competitive Sun Belt Conference.”

App State begins the regular season with a road trip to New Rochelle, New York to take on the Iona Gaels. Iona has won 13 MAAC Championships, including five consecutive titles. The Nov. 9 clash will be the first ever between the two schools.

The Mountaineers return home for a three-game homestand featuring matchups with ETSU and Charlotte. This will be the 127th all-time meeting between the Mountaineers and Buccaneers and the third consecutive year App State has taken on the 49ers. Charlotte has appeared in the NCAA Tournament 11 times, and the contest between the in-state foes has become a rivalry that is annually renewed.

The team heads down to Estero, Florida Nov. 22 for the Gulf Coast Showcase. App State opens the tournament with a clash against the Fightin’ Blue Hens of Delaware and will then play either Fordham or Akron Nov. 23, and one of Rice, Evansville, Vermont or Oakland Nov. 24 to complete the tournament.

App State caps off its non-conference schedule with a trek to the Triangle to challenge ACC competition, Duke and North Carolina. Dec. 16, the Mountaineers will be one of the last teams to compete against Duke on Coach K Court with the legendary mentor, head coach Mike Krzyzewski, still on the sidelines. With it being Krzyzewski’s final season in Durham, Cameron Indoor should be packed for every game, even a mid-December non-conference matchup. Five days later, black and gold will clash with Carolina blue and white on the Dean E. Smith Center floor. The seven-time national champion Tar Heels enter the season with a new head coach for the first time since 2003 after Hall of Famer Roy Williams retired following the 2020-21 season.

“Our program is excited about a very challenging non-conference schedule,” Kerns said. “It is filled with programs that have finished in the top half of their respective leagues in the last few years. We also have a true in-season tournament at the Gulf Coast Showcase, which will be a great experience and challenge for our team.”

App State begins the conference schedule with a Dec. 30 game against Louisiana in the Holmes Center. Jan. 15, the Mountaineers tip off a three-game road trip in South Carolina and Georgia, taking on Coastal Carolina, Georgia State and Georgia Southern over the course of a week.

In the home-stretch of the regular season, App State hosts a four-game homestand with Georgia Southern, Georgia State, Troy and South Alabama all coming to town in February. The Mountaineers then finish off the regular season at Little Rock and Arkansas State before preparing for the Sun Belt Tournament, which tips off March 3.