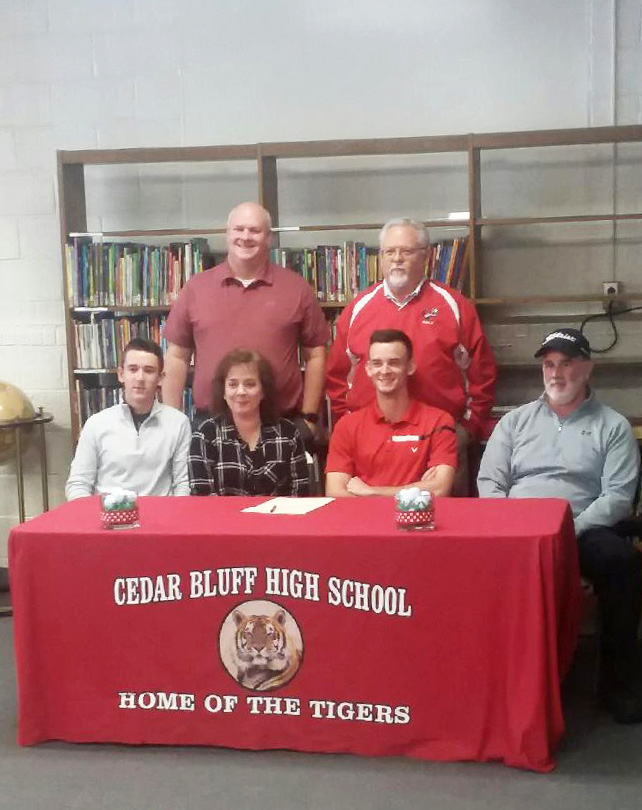 Future Mountaineer Nick Sawyer signs his Letter of Intent at a ceremony at his high school. Courtesy of App State Athletics

Men’s golf will welcome two new signees for the 2019-2020 season. Head coach Bo Redman and App State Athletics announced the signing of the duo on Jan. 17.

“I look at things like academics and integrity, not just numbers and titles,” Redman said. “Golf is somewhat of an individual sport, so having integrity is important to the game.”

Beam played high school golf at the Highland School of Technology, where he earned all-conference honors as a junior. He also finished his senior year with a 2018 1A State Championship individual title.

Sawyer comes from Cedar Bluff School in Centre, Alabama. He won the 1A-2A sub-state title in 2018 and a Junior Open Championship that same year. He is the first person ever from Cherokee County, Alabama, to earn a Division I golf scholarship.

Redman thinks highly of both players, as golfers and representatives of the university. He noted that Beam became an Eagle Scout before graduating, and Sawyer has “unlimited potential.”

“Addison is a hard worker and a family guy. He’s the kind of player I look for,” Redman said. “Nick is talented. He had close to 50 different college offers. He’s the kind of guy who wants to come in and be a leader right away.”

The two will join the App State team next season, a plentiful group of leaders and experienced golfers to show the rookies the culture App State golf has bred over the years.

Junior management major Julian Cepeda is one of those upperclassmen, and he had some advice to give to the newest members of the squad.

“Coach always encourages us to be positive. He never wants to dwell on things we did wrong,” Cepeda said. “Even if you play bad, don’t worry about it, just think about what you did wrong and go try again.”

The App State men’s golf team is hoping to build a team around a culture that coach Redman is a firm believer in. A culture that supports talent, but builds character both on and off the golf course.