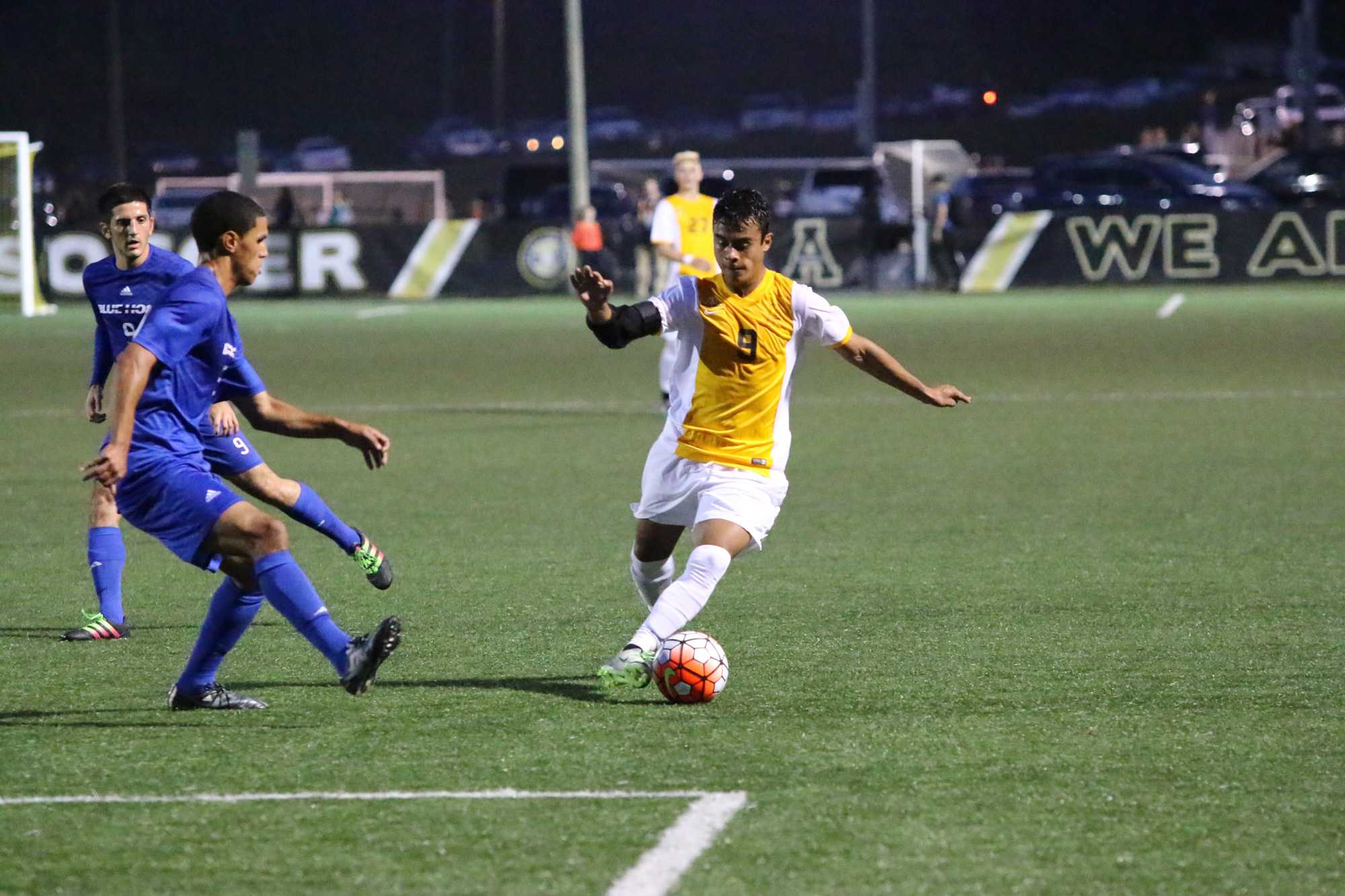 Forward Daniel Avila drives with the ball during App's game against Presbyterian on Tuesday. Courtesy of Appalachian State Athletics/Rob Moore

App State men’s soccer finished off their two game homestand this week with a scoreless draw and an intense 2-0 win for in their first Sun Belt game of the season.

Game One vs. Presbyterian (Tuesday 7 p.m.)

The Mountaineers men’s soccer team looked to extend their winning streak to three straight games but ran into a stingy Presbyterian defense, keeping the Apps from finding a breakthrough goal.

After two overtime periods, the game ended in a scoreless draw, but while the game finished scoreless, both teams had their opportunities.

App State (3-5-2) started the game off slow, and ended up getting outshot 3-2 in the first half. In the second half, the Mountaineers started to find some more success, outshooting the Blue Hose 6-2.

Attacking the endline, the Mountaineers forced the Blue Hose (4-6-1) into conceding set pieces. App succeeded in earning 10 corner kicks throughout the game, but while they created many chances, they were missing the final details to put them ahead.

“We had ten corners and I don’t know if we got a shot off on one of them,” coach Jason O’Keefe said. “I watched three games of Presbyterian and they leave various spaces open that I thought we could attack and we just didn’t execute.”

The Blue Hose did not exert much pressure in the second half, but they stood strong to many shots from the Apps. Senior forward Stephen Chapman had a chance in the 68th minute to put the Mountaineers in front, but his header sailed high.

In overtime, the best chance to break the draw came off a dangerous free kick that was flicked on to Presbyterian’s Mason Lewis. Lewis’s headed shot was promptly saved by freshman keeper Jake Agnew.

Entering the game 2-0 all-time against the Blue Hose, the 0-0 draw did not yield App their third win in as many tries, but it did mark the first shutout for the Mountaineers this season.

App has now given up 1.4 goals per game this season. Tuesday’s contest was also Agnew’s first career shutout, and the Mountaineers remain unbeaten (2-0-2) with Agnew in front of the net.

“It feels great [to remain unbeaten as keeper] and it is definitely a team effort,” Agnew said. “We are all really close on the backline and they do their job and I do mine and we make each other look good.”

The Mountaineers now look towards their first conference game of the season, hosting Howard (1-9-3) this Saturday.

App State men’s soccer stayed undefeated at home, picking up their third victory in four games on Saturday evening and their fifth straight unbeaten game in an intense 2-0 battle against Howard (1-10-3, 0-1 Sun Belt).

“It is a great way to start off Sun Belt play,” Agnew said. “It will build our fire like we try to do everyday in practice and it is great to come out here and get this result.”

Dominating possession of the ball at the beginning of the game, the Mountaineers had early opportunities to score with an pass inside the box to Chapman that was just missed.

Senior forward Jordan Melia helped build App’s shot advantage early on taking the Mountaineer’s only two shots, including a free kick that was just missed, throughout the game’s first 42 minutes.

“The first 15 minutes we were trying to stay really compact and go at them,” Agnew said. “Once we were able to open up and play a little bit they started to settle down.”

With three minutes remaining in the first half, a foul on Howard set up the first of four Mountaineer corner kicks in the last three minutes with three shots from sophomore Raheem Somersall and Chapman and senior Ben Steen.

App finished the game with 11 corner kicks but was unable to convert on any, leaving them still scoreless on corner kicks this season.

The Mountaineers entered the half with a scoreless game for the second straight match.

“It was a pretty scrappy game and we had a game plan and it was tough to execute it in the first half,” Chapman said. “But there were spots I think we did get behind them on and work the sidelines and keep the ball as much as possible, which we did even though they really made us work for it.”

Entering the second half, a scuffle in the 51st minute led to Howard’s goalie Kenneth Hersey being thrown out of the game on a red card and Chapman issued a yellow card.

After a couple minutes of scuffling between the teams leading to five total yellow cards being thrown out throughout the game, Chapman nailed the penalty kick to give App a 1-0 lead.

Howard leads the Sun Belt with 23 yellow cards through their first 12 games not including the game against App. The Bisons finished the game with 16 fouls to App’s five.

As emotions ran high, App paced the game in possession once again doubling their first half shot count in just the first 25 minutes of the second half.

Chapman scored his second goal of the game with an assist from freshman Graham Smalley in the 60th minute give App a 2-0 cushion.

“We were trying to get that first goal because that was a big push to boost our confidence and once we got the second one it helped tremendously being a big cushion and building our confidence up,” Chapman said. “It makes them [Howard] push further and allows them to be out of position to score more goals, which helped us score the second one.”

Pushing the reset button after a 1-5 start, the Mountaineers finally are looking like a team ready to contend for a Sun Belt championship, but head coach Jason O’Keefe said there is a lot more work to be done.

“I told them this was great but we would be kidding ourselves if we didn’t have to improve tremendously before take on the defending champs next week,” O’Keefe said. “We hit the reset button when we were 1-5 and we knew we had to start our new season. Conference play was at the tail end of it but we had to start playing better immediately.”

Chapman said that having such a turn around has always been there, it just has taken a while to figure out.

“I think it was there and we were just trying to find it,” Chapman said. “We were losing confidence a bit at the beginning and once we got that first win we started to figure things out and continued to get the next one. Getting our confidence up was the big thing.”

App State will travel to Hartwick, the defending Sun Belt champion, on Saturday at 2 p.m. in their second Sun Belt game of the season.