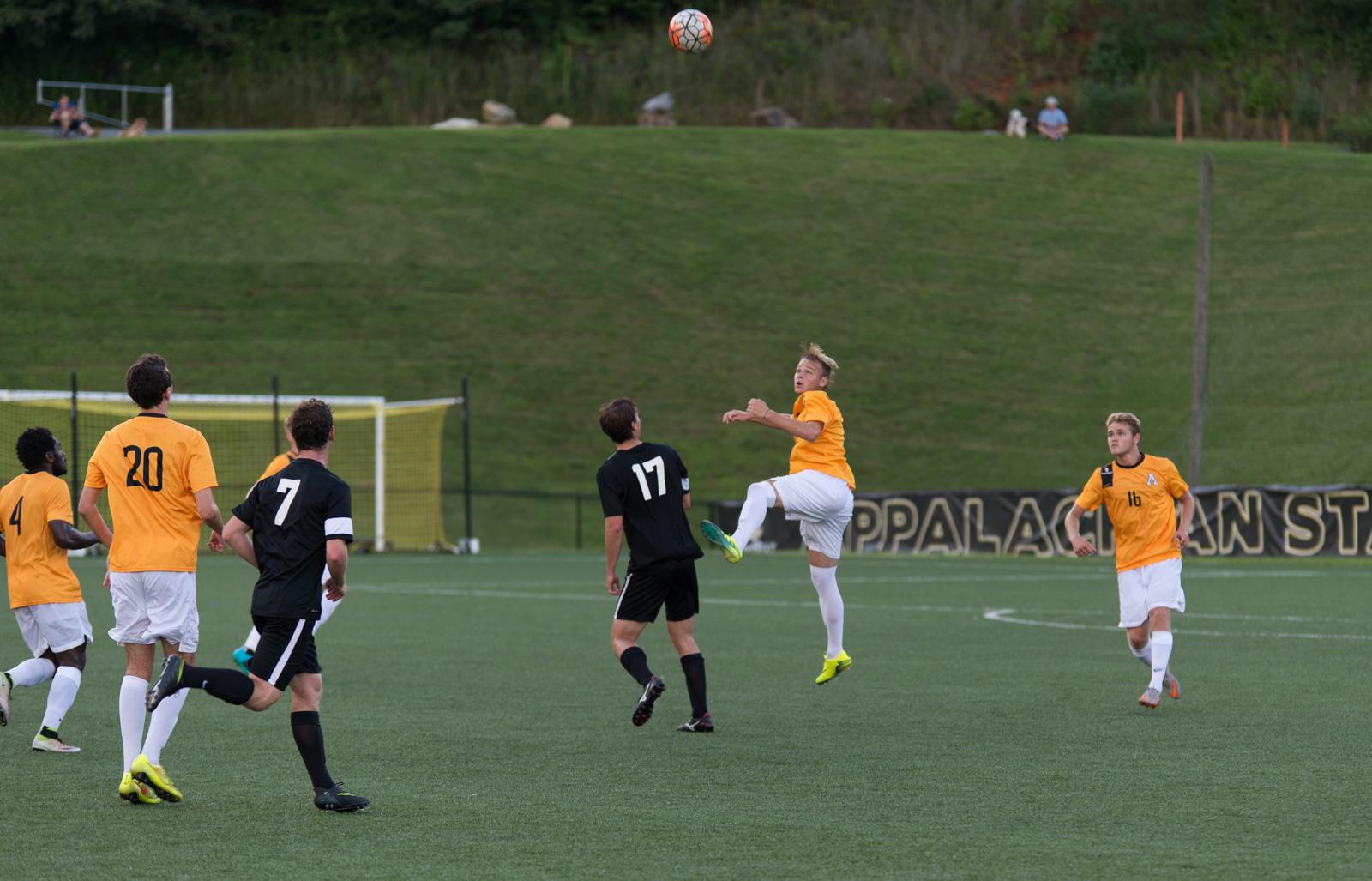 The App State men’s soccer team held their annual black and gold exhibition game at Ted Mackorell Stadium on Friday night as the gold team defeated the black team 1-0 in a defensive battle.

The game consisted of two 35-minute halves with very limited substitutions, allowing everyone to experience on the field action.

“It was a great training exercise to improve some match fitness,” head coach Jason O’Keefe said. “We got 70 minutes and we didn’t have a lot of subs so guys had to kind of work through things. I am hoping we improve match fitness and be more ready to go with more minutes and higher intensity for Tuesdays game against Wofford.”

However, when scrimmages happen, injuries can still occur. Senior starting goalie Jaron Bradley, who started for the gold team, suffered a low body injury after a collision that sidelined him for the rest of the game.

All four goalies, including Bradley, would see playing time throughout the scrimmage.

“I thought it was a great learning experience and we got all the guys out there,” junior midfielder Cooper Coughlin said. “Most of the freshman hadn’t played under the lights so it was a good experience and seeing their confidence grow and see that lead into preseason and the first half is exciting.”

With eight freshmen on the team and five transfers, building team chemistry was pivotal for the team before the full season begins.

“Today we wanted to look at the relationships out there and some of them worked out pretty well. Some we have to look at and continue to tweak,” O’Keefe said. “But it was really just about getting these guys a run out with 13 new guys at the Mack.”

Having only five combined shots taken in a scoreless first half, the gold team shut down the black team taking five shots, with three from Coughlin who was unable to score.

However, Coughlin helped senior Keegan Tanaka score the game’s only goal in at the 46th minute.

“I saw Cooper and the ball was rolling into him and I know he’s a great passer of the ball so I got in good position and it just wobbled into the goal,” Tanaka said. “I just had a little composure and put it in.”

On a side note, captain Jordan Melia experienced his first real game action at his new position as a midfielder. Melia made the transition from a defender in the spring when O’Keefe arrived switching sophomore Ian Bennett to defender.

“It’s been tough, but coach pushes me every day and he expects the highest quality play from me,” Melia said. “I just have to keep learning and I will learn to break lines and try to just learn off everyone else.”

The Mountaineers will face their first opponent Tuesday in their second and final exhibition game at Ted Mac at 6 p.m. against Wofford.