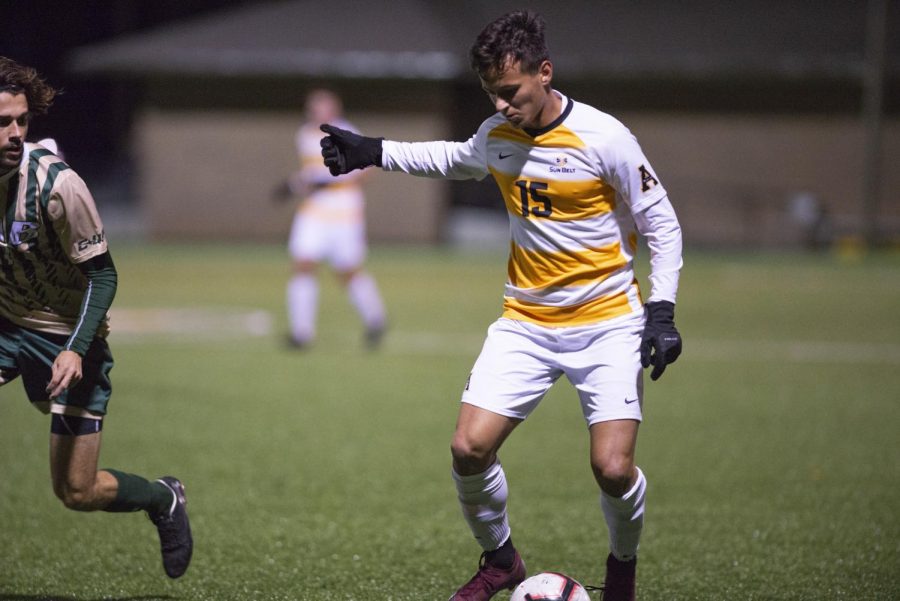 Sophomore midfielder Dimitris Moraitakis dribbles the ball during App State's 4-2 loss to Coastal Carolina on Oct. 19. Moraitakis has goal and has started 10 games this year.

The App State men’s soccer team finished the regular season with their highest win total since 2015, going 10-6-1 overall and 2-3 in the Sun Belt.

“We’re just trying to take it one game at a time because that’s all you can really do moving forward,” senior midfielder/forward Austin Hill said. “If you’re looking past opponents, you might leave it up to chance in the current game that you’re facing.”

Some highlights of the season included a six-match unbeaten streak from Sept. 21 to Oct. 16 and a 1-0 shutout win at ACC and in-state opponent North Carolina. The Mountaineers hadn’t knocked off the Tar Heels in men’s soccer since 1980.

“We’ll have plenty of time in the offseason to look back at the great things that we were able to accomplish,” head coach Jason O’Keefe said. “I think the group is still hungry for more. While we still have an opportunity to continue to write the last chapter, you want to put your best foot forward. (We) can’t be thinking about Carolina or anything we’ve done. You just have to stay focused and have a refuse to lose mentality this week.”

Now, the team’s focus is set on the 2019 Sun Belt Conference Championship. App State will host the tournament at the Ted Mackorell Soccer Complex and games will be streaming on ESPN+.

“I am very excited to play in the conference tournament, and I think it’s a bonus for us because it’s our home ground,” freshman midfielder Mayola Kinyua said. “We’re familiar with it; we have our home fans that are going to be behind us no matter what. So, we just need to win and make our fans happy because we don’t want to let them down.”

Central Arkansas clinched the No. 1 seed of the tournament with a 4-1 conference record, and Coastal Carolina locked up the No. 2 seed by going 3-2.