Michael – Down and Out in the High Country 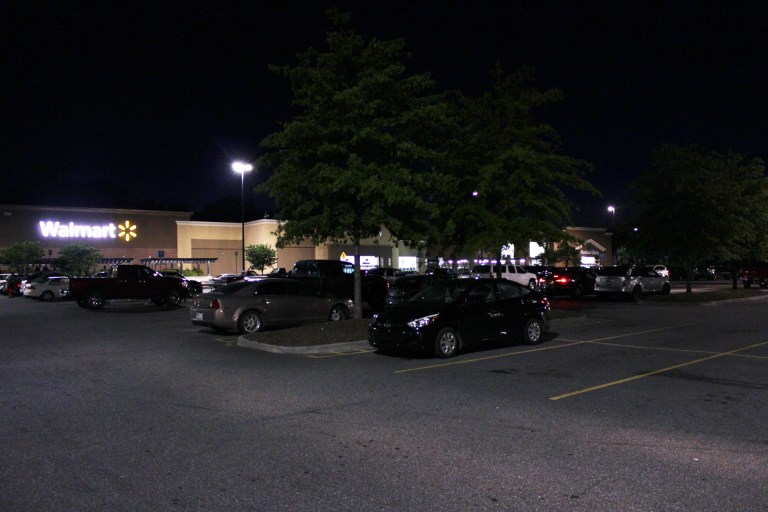 Michael McGee tries to nudge himself into a comfortable position in the front seat of his 1992 Dodge Neon, hoping to catch some sleep in the Wal-Mart parking lot he called home.

McGee, a former History major at ASU, went to school on disability money as a non-traditional student. Personal problems and not finding a job post-graduation left him with nowhere to stay but his car.

Michael McGee said he decided to go back to school after suffering a stroke.

“It’s weird because I’ve been shot at and stabbed twice in my life, and I was never as scared as when I had my stroke,” McGee said. “I was really honest scared and I think the reason why is I made peace at a very early age with the possibility of dying but the stroke didn’t scare me for dying, it scared me of what kind of life would I have after.”

McGee said that even routine tasks like cooking a meal left him too tired to stand, forcing him to spend the better part of two or three years recovering.

He decided to go to school after being a substitute teacher. He had a background in teaching martial arts and wanted to apply that experience to teaching history.

He started at Catawba Valley Community College and said studying there motivated him to apply to four year schools. He started looking around in the area and instantly fell in love with ASU.

“I really enjoyed Boone, when I went up there the people were very helpful, very positive. They really cared and they legitimately seemed like they cared about me getting a degree,” McGee said. “They were very friendly, they gave me the prices, ‘cause I was concerned about the money and everything, where the other universities were not like that.”

But during his time at ASU tragedy struck. His wife died in a car accident on her way to Charlotte with her mother. Their car struck a tree going 70 mph, and his wife was brought to Charlotte where she died an hour and a half after the crash.

McGee was driving back from ASU when the crash happened and said the news tore him apart.

“I had lost my mother, I had lost my aunt, my grandmother and I have lost friends, but my wife was so close to me and I didn’t realize how much of a part of me she was until she died,” McGee said.

Finding out how she suffered pushed him over the edge. McGee said after that a part of him died and he turned to alcohol to numb the pain.

“It was just a case of I did not care, I did not give a shit, I wanted to die.” McGee said. “I was too chicken and it’s against my religious belief to take my own life, but I would go and put myself into situations where somebody else could do it easily.”

McGee was still attending ASU and said his attitude and his drinking had an adverse effect on both his grades and personal relationships.

His son left the military to take care of him but he said their relationship became strained, sometimes breaking out in fights. He became estranged from his daughter, saying that his behavior drove a wedge between them.

“I can’t describe how cold hearted I became and very few people could even communicate with me at that point in my life, even my kids, I even was cold to them,” McGee said.

McGee said he always strove to help people but his wife’s death left him afraid to care, afraid to experience that pain again.

Able to graduate from ASU in December 2014 but unable to find a job, McGee said he burned through his savings, eventually losing his house.

“I lost everything,” McGee said. “I lost all the furniture, I lost knick knacks that were in the family history for years, bibles that were my great-great grandfather’s. Things that I can never get back.”

After that, McGee said he drove off in his Neon with whatever clothes he could grab and set to figuring out how he was going to survive.

He settled in a Wal-Mart parking lot because it seemed safe and he could use the bathroom during the night.

Finding the essentials proved difficult. McGee said he would often spend much of the day in a McDonald’s, using their wi-fi and eating off the dollar menu.

“Try eating on a dollar cheeseburger and that’s all you get for the day, that and a Coke, your stomach shrinks up,” McGee said.

He had a hard time getting the nutrients he needed. Unable to prepare food, he would largely subsist on Pop-Tarts and Vienna sausages.

“You would be very surprised how difficult it is to eat when you’re living in a car because you can’t cook, you try to heat food up on your engine and that gets mixed results,” McGee said.

Cold nights and a cramped car made for a hard night’s sleep, with constant disturbances from the traffic outside shattering whatever peace could be found.

“That was a hard time, in some ways you grow because everything else stops and you have time to reflect on yourself,” McGee said. “But on the same time you have to be very careful because depression can set in and all the hopelessness can set in and it’s in those time where you really have to tell yourself, ‘No more, I’m gonna change it.’”

While he would spend whatever time he could filling out online applications, McGee said that getting a job presents other logistical hurdles when you’re homeless, like getting clean clothes or finding a place to bathe before the interview.

McGee said he was able to bathe and borrow clothes from the shelter to interview for a manager’s position at Popeye’s, but when he went to Charlotte for training he couldn’t find a place to bathe.

“I had to be at work and I needed a bath so I pulled up to this old condemned car wash where luckily the hose was still working,” McGee said. “I pulled in the back and I was taking a bath and I needed to change out of my underwear, and when I did this I turned around and there’s this little old black lady just watching me and she had a smile on her face.”

While he got the job at Popeye’s, McGee said his first week was tough, drawing complaints for his messy clothes and unshaven face.

“I figured I was gonna be fired anyway so I explained to them why I was unprofessional, that I was doing the best I could until I got my first paycheck,” McGee said. “The trainer took pity on me and he turned around and called his boss and the company got me a hotel and they gave me $100 to go and get some food.”

He is currently living in a hotel, working at Popeye’s and said he is planning for his next step, looking to find a way to use his degree and hoping to return to school in the future.

While he’s doing better now, McGee said it is still an uphill struggle to get back on track.

“I’m still trying to dig myself out,” McGee said. “This is by no means over; we’re just in a better place than we were six months ago.”