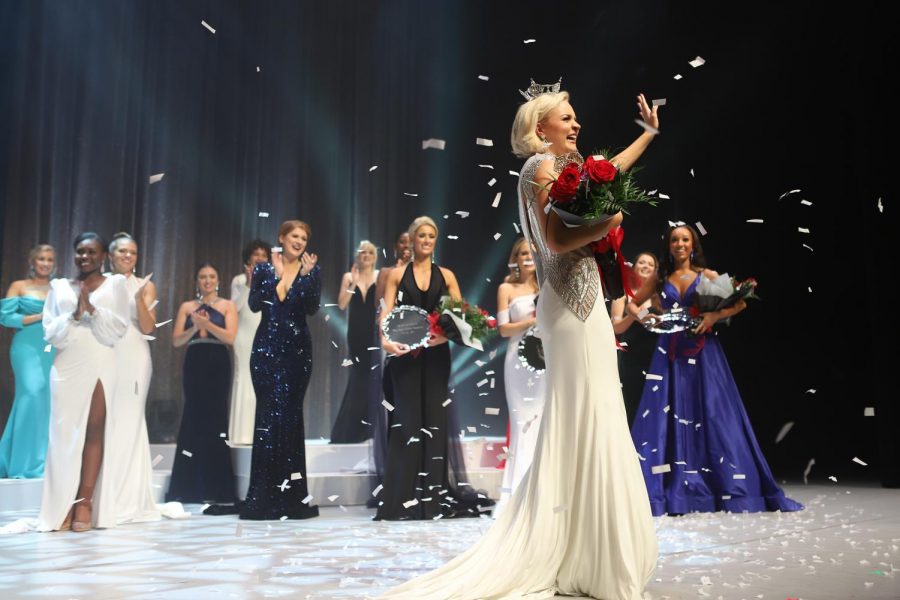 After a weekend of performances, interviews and modeling, 34 women stood onstage in High Point on June 26, waiting for news of who would be crowned the new Miss North Carolina. Crying tears of joy, a rising App State senior received a bouquet of red roses and her sash and crown.

“If you’re familiar with Broadway Cares, it’s kind of in the footsteps of that,” Batson said. “I take Carolina blue buckets into performances and theaters and performing arts events and collect monetary donations, and then those donations are given directly back to those theaters in need, and they’re able to do whatever they need to do with it.”

Carolina Cares once raised over $8,000 in one night. The money sent 31 children to theater camp tuition-free.

“When I was little and wanted to do certain things, we had to look at the price first,” Batson said. “So to just be able to go ahead and set these kids up, and knowing they didn’t have to find money to do it, that was really inspiring for me.”

Due to COVID-19 closures last year, theaters throughout America were forced to close their doors. Batson said she feels strongly about supporting theaters and performers who lost work due to the pandemic.

“What comes to my mind is how we all got to watch Hamilton on Disney Plus. What a lot of people didn’t realize is the people that we watched on stage were unemployed,” Batson said. “So getting into theaters and kind of celebrating their reopenings and collecting monetary donations to get them back on their feet,  I’m excited to do that.”

In high school, the Wilmington native wanted to be a professional ballerina. She even participated in a summer-long dance intensive at New York’s Joffrey School of Ballet. However, when her father became unemployed, Batson started looking for places to perform that did not require a heavy financial commitment. She soon discovered community theater.

“Through community theater, I made a connection with someone who knew about the Miss America organization and who knew I wanted to get back on stage and perform,” Batson said.

When the dancer learned about the talent portion of pageants, she enrolled in Wilmington’s Miss Azalea Princess Pageant. As a junior in high school, Batson won her first pageant.

“We always like to say that you kind of get the ‘pageant bug’, and once you do one, you can’t really stop,” Batson said.

Batson went on to win Miss Wilmington, Miss Greater Sampson County and Miss Cleveland before her recent crowning. She will compete in the Miss America Pageant in December.

“It’s the 100th anniversary of Miss America,” Batson said. “It’s really special to me to be able to go and represent North Carolina at such a historical event.”

Batson said she loves the sisterhood of North Carolina pageants. She describes her competitors as “the most inspiring, impactful, empowered women” that she’s ever met.

“We all have such a special bond and a way of lifting each other up and promoting each other in our state,” Batson said. “A lot of people think that pageant girls are really catty and rude and mean, but in my experience, it’s actually quite the opposite.”

Batson and Martin met through the Appalachian Musical Theatre Club’s trip to New York in 2018. Martin said their friendship grew through theater and pageants.

“It was so great to meet her and then to continue our relationship and friendship through the Miss America Organization,” Martin said.

Martin said the friendships among competitors grew through the hardships of 2020. When COVID-19 postponed their state competition last year, the women offered each other support and encouragement.

“We all went through the unique experience that we had with COVID-19, but also we were still trying to serve our communities and prepare for our state competition,” Martin said.

Title-holders across the state regularly send messages of support through their online group chat. When they need encouragement, the “sister queens” are there to lift each other up.

“There were so many times when someone was going through something,” Martin said. “They would send a message asking for prayers and support, and that was something that everyone was always willing to give.”

As Batson prepares to represent North Carolina in December, Martin is excited to support her, not only as a “sister queen” but also as a “fellow Mountaineer.”

Batson will graduate from App State in spring 2022 with a Bachelor of Science degree in Communications, Public Relations and a minor in Theatre Arts. Batson plans to get her master’s degree and is working toward a career in arts management.

The 100th Annual Miss America Pageant will be held in December at the Mohegan Sun Resort in Connecticut. The organization has not yet announced an official date.