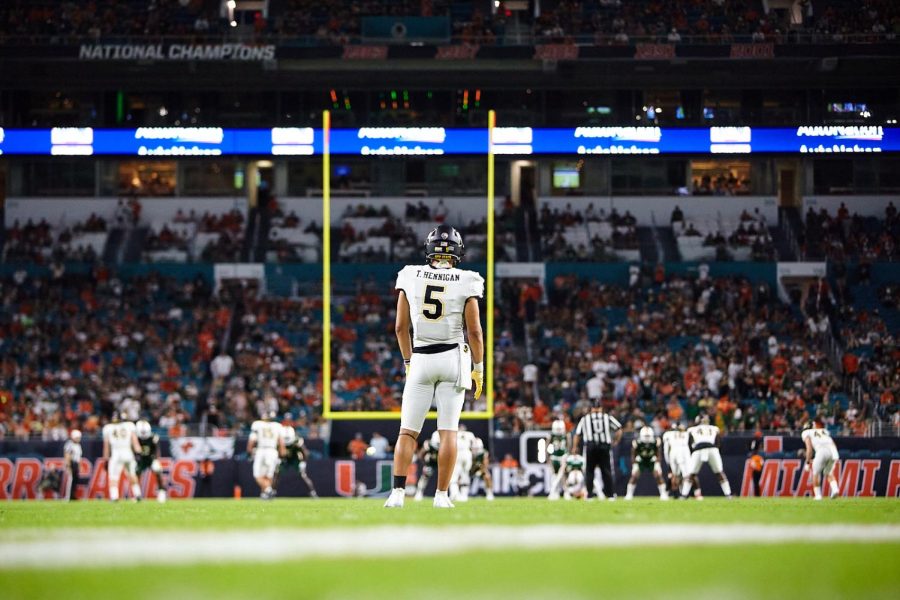 Super senior Thomas Hennigan awaits a punt against Miami Sept. 11. Hennigan finished the game against the Hurricanes with three receptions for 28 yards.

Thomas Hennigan is no stranger to Mountaineer sports fans. The 6-foot-1-inch, 210-pound super senior wide receiver from Greensboro, North Carolina, has made an FBS record 61 career starts, a record he broke during App State’s upset over Coastal Carolina.

Throughout his tenure in Boone, Hennigan has become one of the most steady and consistent players in college football.

Hennigan said mental and physical preparation is how he stays on course for a season.

He ranks sixth on the Sun Belt’s career reception list with 221 and became the Mountaineer’s all time leader in receptions during App State’s thrashing of University of Louisiana-Monroe 59-28.

“It wasn’t something I was focused on, just trying to win the game,” Hennigan said.

He’s hauled in 20 career receiving touchdowns, ranking fifth in program history and has 2,810 receiving yards to his name.

Hennigan earned second-team all-Sun Belt honors in 2019 and third-team honors in 2020. He was named an Academic All-American last season.

The wide receiver has been a major contributor to the Mountaineers since he arrived in the High Country. Bursting on the scene in 2017 as a freshman, he caught 46 balls for 585 receiving yards and seven touchdowns, while helping lead App State to a 9-4 record and a Dollar General Bowl victory. His sophomore year, Hennigan had 29 receptions, 327 receiving yards and a touchdown, ending the season with a victory in the New Orleans Bowl.

Hennigan’s statistically best season came in 2019 where he hauled in a career high 61 receptions, 773 receiving yards and six touchdown catches. The Mountaineers finished 13-1 and repeated as New Orleans Bowl champions.

Last year, the NCAA granted winter student-athletes an extra year of eligibility due to the COVID-19 pandemic. Hennigan took advantage of the opportunity to return to the High Country.

“When I look back, it was the right decision 100% because I can’t think of another place on Earth I’d rather be than up here with these guys and getting another opportunity to win another championship,” Hennigan said.

“I was on the sideline down there in Conway, and when we had the pick-six and I was like, ‘I’m coming back to beat these guys and to right everything that was wrong this year,’” Hennigan said.

Coming into the 2021 season, Hennigan was named to the Wuerffel Trophy watchlist, an award given to student athletes who best exemplify community service with athletic and academic achievements. He was named one of the six team captains for the season.

“He wants to see everyone do well, so it’s good to be around him and people gravitate towards him,” Wells said.

Hennigan was nominated for the Senior Class Award, an honor given to student athletes who use their platform to make positive impacts in their communities.

“Winning that award isn’t the most important thing to me, but it’s cool to be recognized for the stuff nobody sees,” Hennigan said.

Through 10 games this season, Hennigan has 39 receptions, 509 receiving yards and three touchdowns.

Both Hennigan and Wells said a championship is the ultimate goal.

“Obviously, the championship is why I’m here, and it’s getting real now. I only got a month of this left and I’m just cherishing every opportunity with these guys,” Hennigan said.