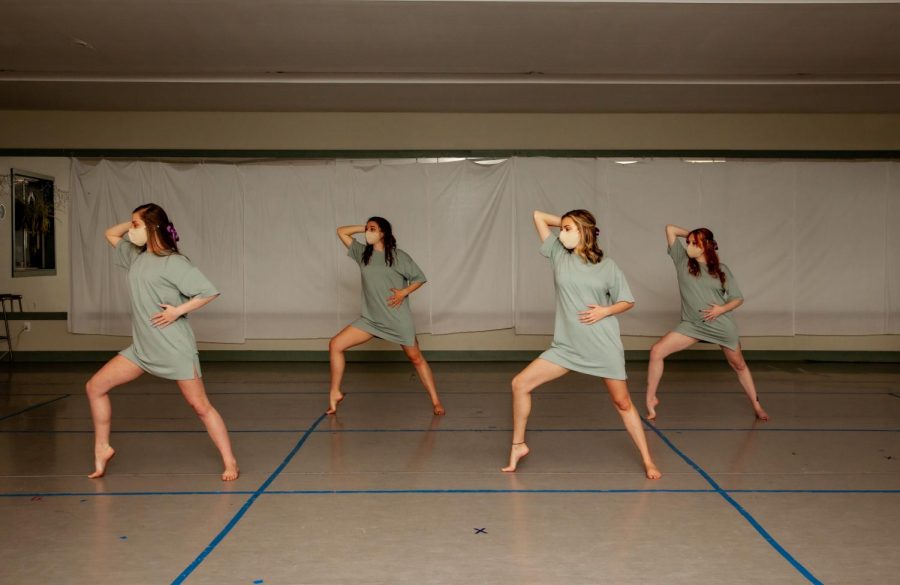 Students dancing in the Momentum Dance Club Showcase. The club prerecorded its dances this year and live-streamed them on YouTube.

From performing in masks to dancing on parking decks, one App State club embraced the change that came with moving its annual showcase online, continuing to tell stories and form connections through movement and music.

Momentum Dance, a club that welcomes all students regardless of dance background, annually showcases students performing pieces that their fellow club members choreographed.

“In momentum, it doesn’t matter who you are,” said choreographer Caroline Jenkins. “It doesn’t matter if you’ve taken 15 years of dance or if you have never danced in your whole entire life. You can join and we’re excited to have you.”

This year, each dance was filmed separately in a variety of locations, from studios to parking decks and edited together for the broadcast.

Also new to this showcase is a theme. In previous years, students choreographed dances however they wanted, but this year they followed the theme of “dance through film.” Each song was from a movie or TV show, which also inspired the stories behind the dances.

Although recorded performing was something most of these dancers had never experienced, they had a positive outlook on the situation.

“I think in majority it’s very beneficial,” said showcase coordinator Hailey Kalsky. “I think it gives everyone a chance to see what dance and film is like because that’s where the dance industry’s heading.”

Kalsky danced in a piece titled “Cringe” that was based on the show “Euphoria” and about the topic of addiction as well as a piece to the song “Bird Set Free” by Sia from the movie “The Shallows.”

Kalsky also helped with video editing, and said filming adds an aspect to dancing that’s not achievable through live performances.

“With a live performance, the audience is watching it from one angle,” Kalsky said. “But with film, you’re really able to get up close and personal with the dancers. You can see the small movements they’re doing with their hands and their feet and moving the camera in a way that it follows that and captures that almost perfectly for the audience to really feel like they’re part of this dance.”

One of the showcase choreographers Caroline Jenkins, a freshman, choreographed the piece “Cringe.” Jenkins also feels the virtual format may help reach more people because they don’t have to be there in person to see it, and it’s available to watch on YouTube at any time.

However, she acknowledged there were still difficulties that came with the showcase such as dancing in masks.

“ I sat down with my girls, and I was like as a dancer, you’re an athlete of emotion, you’ve got to show that,” Jenkins said. “Even though you only have your eyes, you can still show what you’re telling. Tell your story through that and through your whole entire body.”

Alexandra Berg, the vice president of Momentum Dance Club, danced in “Cringe” and performed a solo to the Glee cover of the song “Don’t Rain on my Parade” from the musical “Funny Girl.”

“It’s weird to sit with your friends and family and watch yourself perform because obviously friends and family come and support the show, but you’re not sitting with them while you’re watching yourself. So, it was equally fun as it was a little bit uncomfortable,” Berg said.

Although the dancers performed the showcase at a distance, they were still able to form connections because of it.

“Even though we had classes through Zoom, you still got to know everyone,” Kalsky said. “We connected, we created relationships, we were joking around. Most of the girls I danced with, I didn’t really know before this showcase.”

The showcase can be viewed for free on the Momentum Dance Club YouTube channel.