Monolith makeover: Turchin Center steps get a facelift from Baltimore 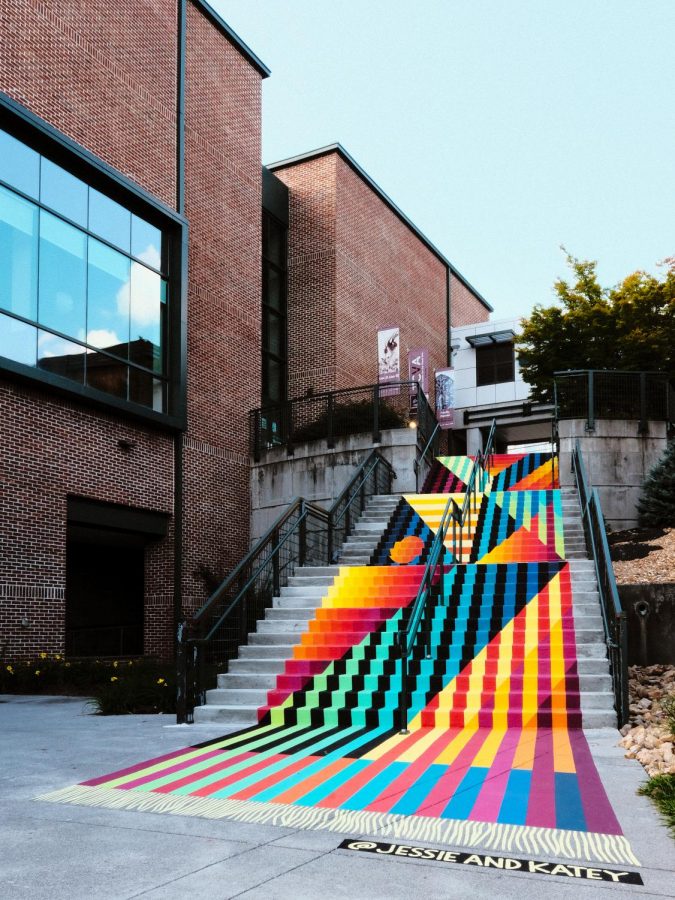 Baltimore artists Jessie Unterhalter and Katey Truhn transformed 36 steps of rough, gray concrete into an explosion of color and intricate design outside the Turchin Center for the Visual Arts.

The staircase was “just a monolith of concrete steps,” Rees-Jones said. “We saw that as basically a blank canvas.”

“We wanted to look at what we could do on the outside of the building that expressed the presence of art inside the building,” she said.

The Turchin Center contacted artist duo Jessie and Katey approximately a year and half ago, Rees-Lynn said. From that point, the process of creating the mural followed a back-and-forth negotiation between the center and the artists.

Unterhalter and Truhn typically start their creative process by taking specific measurements of a space, creating templates, and exchanging ideas before they draw anything, Truhn wrote in an email.

“We begin by passing the templates back and forth, interlocking lines and shapes until we feel we have achieved an interesting and balanced composition,” Truhn said. “Sometimes that takes a couple of rounds.”

Truhn said after deciding which design to use, the pair is “good to go.”

Though negotiation can be simple, the actual creation of the piece is not always easy.

“No matter how prepared we think we are, there are always surprises during installation,” Truhn wrote. “Our final paintings are usually an evolution of our original design.”

Unterhalter and Truhn both earned their bachelor’s degrees in Fine Arts from the Maryland Institute College of Art and have worked together for the last 11 years.

“We probably spend 40% of the year out of town painting murals,” Truhn wrote. “If we only painted murals in Baltimore, everyone there would be very sick of us. So we spread the love.”

The grand staircase mural draws inspiration primarily from Boone’s “craft culture,” Truhn said, and plays on the idea of a giant loom.

While the mural can generally be described as abstract, aspects of the design hint to its Appalachian inspiration, Rees-Lynn said.

Sharp edges of bright oranges and reds contrast with deep blues and black lining to give the appearance of mountains and valleys as the eye travels up the staircase.

Unterhalter and Truhn were also inspired by the architecture of the space and tried to incorporate a design that complimented the steps, Truhn said.

“We think it’s really important to invest in spaces for the sole purpose of shared joy,” Truhn wrote. “Capitalism has got all of us desensitised to advertisements, and it’s refreshing to experience creativity for the sake of smiles.”

As of Sept. 2, the mural remains nameless; however, the Turchin Center is accepting votes to name the piece until Sept. 30. To vote, visit https://tcva.appstate.edu/.