Monsoon and Juniper Avenue rock after first week of class 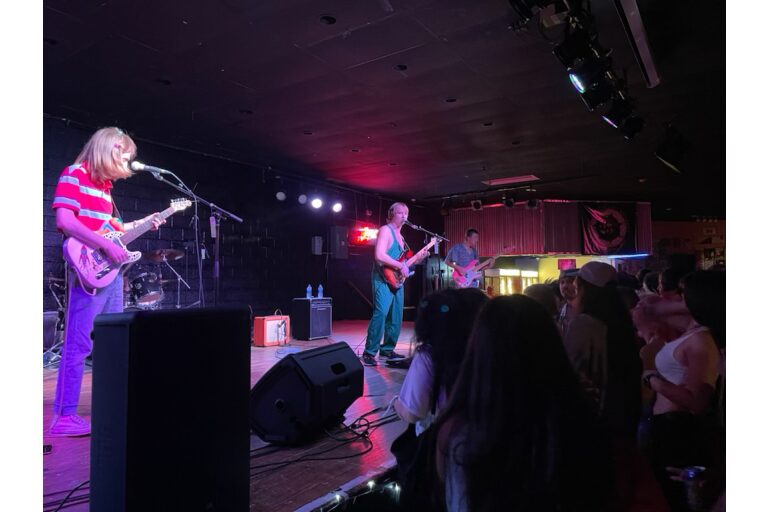 Members, Graham Levy and Luke Baker, of the band Juniper Avenue on stage August 25 at Legends.

Legends hosted bands Juniper Avenue and Monsoon Thursday night for their first show of the semester.

APPS joined with Legends to give students a place to dance after the first week of class. APPS hosts shows and events throughout the semester.

The bands brought in a wave of new music, playing art alternative and punk rock, for students to hear and rock out to.

“It’s really nice to have a place to come to and it’s just awesome, I love the dance floor and the disco ball,” said Laura Roseman, senior computer science major and audience member.

Roseman said she thought dancing to Juniper Avenue’s recent singles was a “great” way to end the first week of classes.

“I’m able to meet more people and not have to do too much out of my way to meet them,” said Samantha Snyder, sophomore psychology major, about being at Legends.

Ben Seaford, chairperson of club shows, said that the main goal of APPS is to create a sustainable and diverse experience while maintaining a fun, free spirited environment.

“We want it to keep it safe, accessible and fairly priced while giving to performers for their share of music,” Seaford said.

“I hope that they want to go to more shows around Boone,” said Graham Levy, Juniper Avenue guitarist and vocalist. They said they feel like there can be a lot of growth that can happen within the community if students get more involved.

The crowd interacted with Juniper Avenue and Monsoon’s recent album and hits from attendees waving hands to singing along and dancing on the dance floor.

Sienna Chandler, Joey Kegel and Will Ingram, best known for Monsoon, were excited to play in Boone again with Juniper Avenue, Chandler said.

Chandler and her band come to Boone often to play, at least twice a month. She added if students want a good freshman experience, then they should come see their band.

Monsoon loves playing with Boone’s local bands such as Kiss It Make It Better and Juniper Avenue enough to call Boone their friends, Chandler said.

“Legends is a legend,” Chandler said to the crowd while performing their most recent album Ghost Party, released in February.