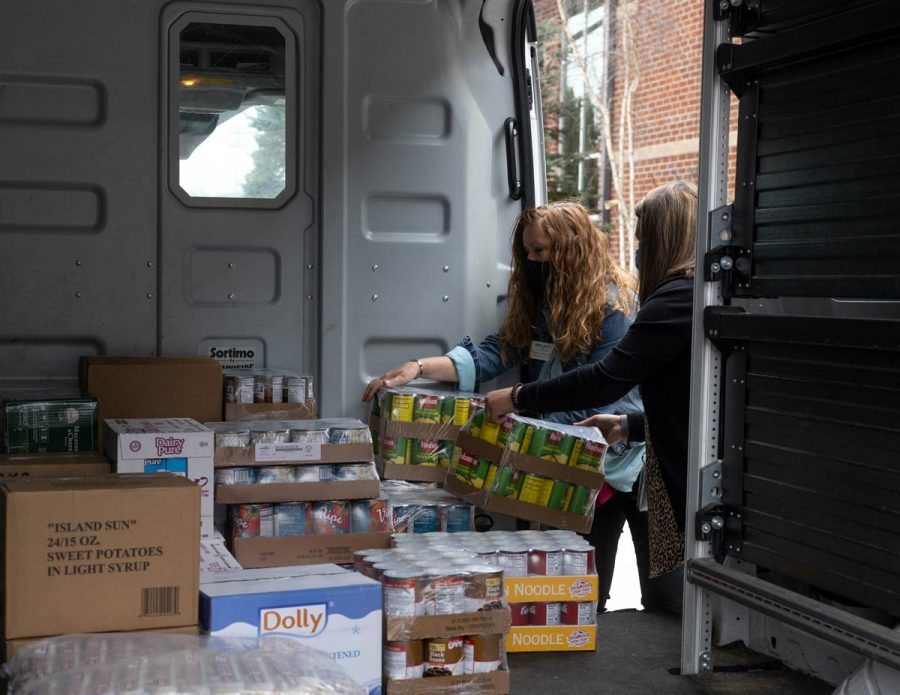 The Hunger and Health Coalition receives shipments of food three times a week. HCC orders food for five different programs, including two programs developed during the pandemic: a mobile delivery program and a food pantry at Watauga High School.

A local food bank is delivering food to the homes of food-insecure children in Watauga County.

The Hunger and Health Coalition’s backpack program provided food-insecure children with food boxes at the end of the school day for more than a decade prior to the pandemic. Food boxes will now be administered through a mobile delivery service which relies on volunteer drivers to carry food to children in need.

To be food insecure means to be unable to consistently access or afford adequate food, according to the Merriam Webster dictionary.

Watauga County had 8,080 food-insecure residents in 2013, according to Hunger Research. That number is now 7,450, with 25% being children, according to HHC.

The contents of each food box varies with the donations to the HHC that week. They generally contain canned foods, frozen meats, dairy products, pasta or rice and breakfast items.

Luckily, Young said, the community has risen to the challenge. A combination of fundraisers, individual donations and grants have allowed the HHC to continue servicing those in need.

North Carolina ranked eighth nationally in food insecurity with an average 20.9% of children living in food-insecure households in 2016, according to the North Carolina Department of Health and Human Services.

The backpack program provides food boxes to families who register in person, on the website, by phone call or are referred to the HHC through Watauga County Schools.

The HHC has other other delivery services besides the backpack program. In 2019, the HHC incorporated a program called A Simple Gesture, which was founded by Jon and Karen Trivers in California. A Simple Gesture is a national organization whose program is incorporated in food banks throughout the country.

Donors in the program are provided with a green bag, which they fill with donations such as canned goods, pasta, and other non-perishables over the course of two months. At the end of the two months, the donor leaves the bag on their porch and a volunteer driver comes to pick it up.

A Simple Gesture has collected over 100,000 pounds of food and accumulated 600 donors in roughly two years, said Jenn Bass, A Simple Gesture’s coordinator.

Beth Davison, sociology and cultural gender and global studies professor, reached out to the HHC last summer when the pandemic was still relatively new.

“I was looking for a way to help out with the dire needs many people found themselves, being distressed,” Davison said.

Adam Hege, public health education professor, started driving this January. He said the pandemic combined with a new year’s resolution is what influenced him to contact the HHC.

“Knowing that a lot of people are struggling right now with food insecurity and job loss and all those kinds of things, I think I was really drawn to it,” Hege said.

Davison said she plans to continue driving after the pandemic is over.

“It’s simple to be involved, for both the people who are donating the food, which really they’re doing the bulk of the work and the giving and service and it’s easy for the drivers to drive by and pick it up,” said Davison.

Following the model of A Simple Gesture, the backpack program mobile version will be contactless and low-profile. Drivers will only know how much food to deliver and where to deliver it.

“We know that when people have access to nutritious food they are better able to show up as partners, as family members, mothers, fathers, community members, employees,” Young said. “They’re able to live their life better.”

The HHC also provides necessary pharmaceuticals for those who qualify and a wood lot which offers free wood for cooking or heating.

One anonymous resident said they have been unable to access retirement money and that the service has been incredibly helpful, in a statement to the HHC.

“This has been a very humbling and embarrassing situation to find myself in after all these many years and being such a private person,” the person said in a statement from the coalition. “Again, thank you so much for help which really has been such a blessing to us. We are very grateful for you all.”

Most volunteers of HHC disappeared as a result of the pandemic. Students who interned with the organization and high-risk senior citizen helpers left.

Those who wish to donate or volunteer with the backpack program or A Simple Gesture program can sign up at the Hunger and Health Coalition website.