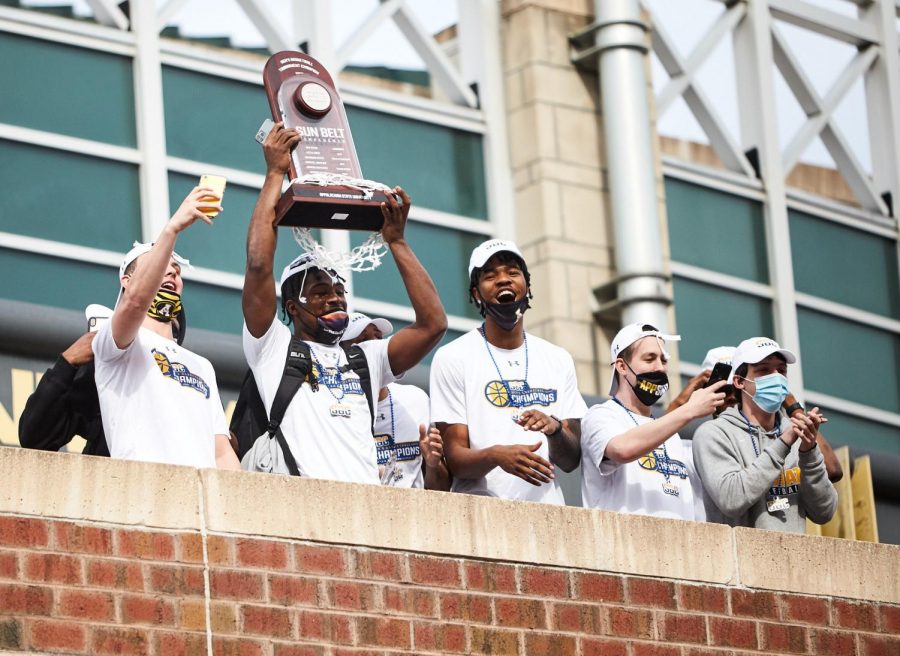 App State men’s basketball returned to Boone on Tuesday afternoon after winning the Sun Belt Championship 80-73 over Georgia State. The Mountaineers came into the tournament as the fourth seed in the East and were able to defeat the top seeds in both divisions.

At 12:30 p.m., App State Athletics sent a tweet inviting Mountaineer fans to welcome back the team at the Holmes Convocation Center from a safe distance.

Students, fans and cheerleaders gathered on Holmes Drive, giving the team a warm welcome home. At least 100 people filled the area next to the road, waiting patiently and excitedly to see the team arrive.

“It was amazing to see the community come around, because I honestly didn’t expect that many people,” freshman App State student Justin Turner said. “This season I’ve just watched them, and I was thinking we might be able to make a run here.”

“We’re also a part of the Student Yosef Club executive board, so that’s a big reason we’re out here is supporting athletics,” Turner said. “My emotions were all over the place, but whenever we finally secured it and we won, we came and we were with them and we stormed Convocation and we were jumping up and down and we were so excited that we got a win.”

At 3 p.m., the team arrived in Boone with a police escort. The players waved to the fans and were greeted with cheering as the App State fight song played over the speakers. After the team unpacked the buses, head coach Dustin Kerns stood with the team on the balcony of the Northwest entrance of the Holmes Center to celebrate with those who attended.

“How about those Mountaineers!” Kerns said. “Our players showed incredible toughness and we talked about all season being the best team. Through adversity and challenges, it brought us closer together and there’s no question we were the best team.”

The Mountaineers triumphantly hoisted the trophy and made sure the fans knew they were a part of such a huge moment for the entire program. In a season when COVID-19 limited fans from attending games, this was a moment the team finally got to share with the Mountaineer faithful.

“We couldn’t do it without (the fans), we’ll give you all a round of applause,” Kerns said. “When we get back to the Holmes Center next year, we got to pack it out every single game. We’re just getting started, go Mountaineers and take the stairs!”

After finishing 11-21 in the 2018-19 season, Kerns turned the program around with two winning seasons, a conference championship and a bid to play in the NCAA Tournament for the first time since 2000.

App State will find out its seeding on Selection Sunday, March 14, with the NCAA tournament beginning later that week.

Kerns and the team addressed the crowd after their arrival: pic.twitter.com/ESeqpOvILb