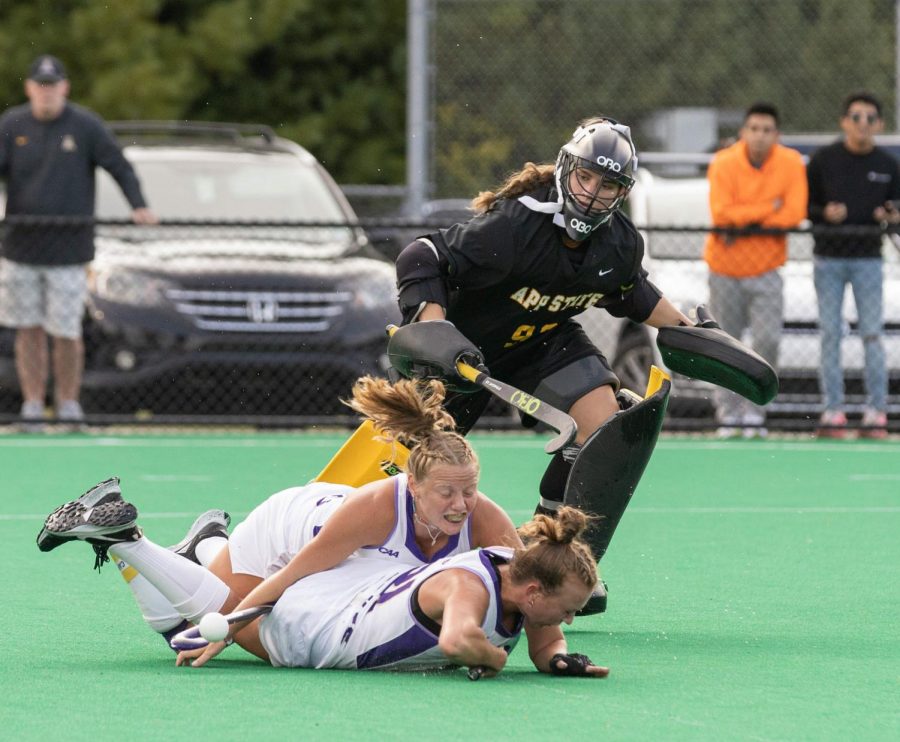 Junior goalkeeper Addie Clark watches as two JMU players collide and collapse to the ground. Clark made eight saves against JMU and 10 saves in the Sept. 12 matchup with OSU.

App State field hockey came out of its previous weekend 2-3, winning 2-0 against the No. 24 James Madison Dukes Sept. 10 at home but losing 0-2 to the Ohio State Buckeyes Sept. 12 on the road in Charlotte.

The win against James Madison was the first time in program history the Mountaineers defeated a ranked opponent. From the start, they kept the Dukes in check. Junior goalkeeper Addie Clark saved four shots on goal and blocked another, which seemed to rattle James Madison — something the Mountaineers quickly took advantage of.

By the second quarter, senior midfielder and two-time All-Mid-American Conference team selection Friederike Stegen had already scored the first goal for the Mountaineers. This was quickly followed by a goal from junior forward Carli Ciocco in the third quarter. App State held James Madison scoreless en route to their second victory of the season.

“This is huge for us,” head coach Meghan Dawson said. “When you look at our schedule, you see a good, competitive, non-conference schedule.”

Going into this game, the Mountaineers were 1-2, scoring a 3-1 win against Towson but falling to Georgetown 2-3 and No. 14 Wake Forest 1-5. Dawson said beating James Madison was a “big morale booster” for the team.

“To come out on top of a very, very talented JMU team, that’s even more than we could have asked for,” Dawson said.

Along with Clark saving eight shots on goal and blocking another in the game, the Mountaineers as a whole were able to stop all 17 shots taken by James Madison.

“The biggest thing for us in this game was defense,” Dawson said. “What really helped us was stopping the play and frustrating JMU in the sense of not letting them take control of the game.”

App State later took on Ohio State, losing 2-0 to the Big Ten team. On offense, the Mountaineers were only able to attempt three shots on goal, compared to the Buckeyes’ 13. But on defense, Clark saved 10 shots, and sophomore midfielder Grace Ball tallied a defensive save — the team’s first of the season.

“I’m proud of our girls for working,”  Dawson said. “A lot of stuff was uncontrollable and I’m proud of them for pushing through. I’m looking forward to using this to go into conference play next week.”

The Mountaineers host 2-7 Ohio University at Brandon and Erica M. Adcock Field Oct. 1 at 3 p.m. This will be the second game of their MAC schedule.