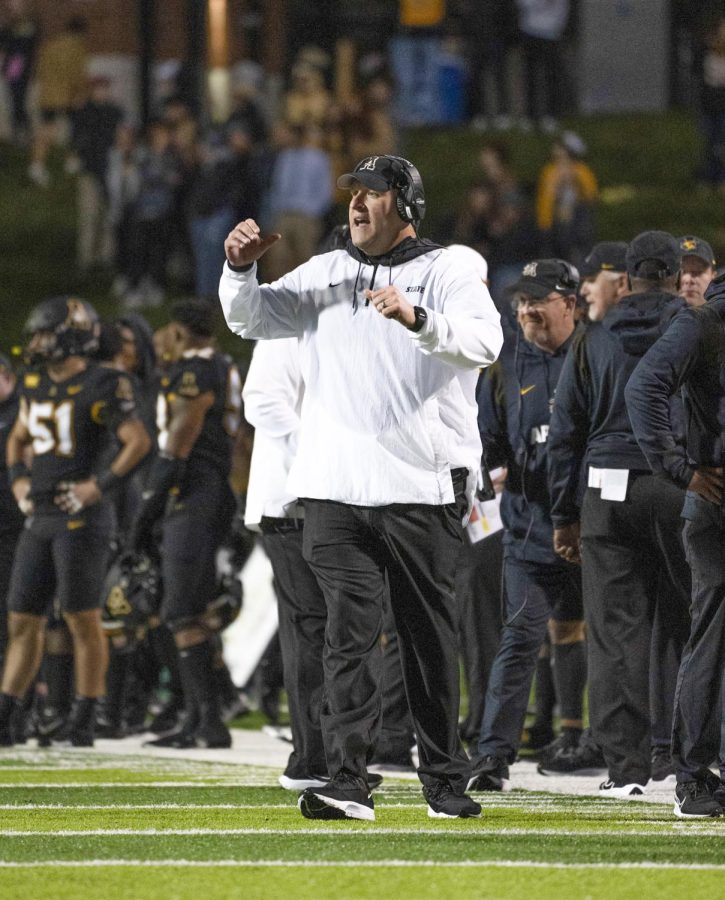 Head coach Shawn Clark coaches the Mountaineers to a late comeback victory against Marshall. App State defeated the Thundering Herd 31-30 behind 187 rushing yards from sophomore back Nate Noel and three touchdowns by junior back Cam Peoples.

This will be the 10th meeting between the Mountaineers and Ragin’ Cajuns. App State is 8-1 all time against Louisiana, who won its first game against App State last season 24-21.

“They’re well-coached. There’s no weakness on their team,” head coach Shawn Clark said. “It’s going to be an exciting game. Both teams will be ready for it.”

The Mountaineers head into this game with a 4-1, 1-0 SBC record and a head full of steam after blowing out Georgia State 45-16 last week. Graduate transfer quarterback Chase Brice had the best game of his career as a Mountaineer, throwing for 326 yards and three touchdowns on 20-28 passing. As a team, App State racked up 502 yards of total offense.

App State expects senior running back Daetrich Harrington to see limited playing time and make his first appearance since Nov. 7, 2020, when he suffered a season-ending injury. Harrington joins junior Cam Peoples and sophomore Nate Noel as a third option at running back.

Louisiana enters the game with a 4-1, 2-0 SBC record The Ragin’ Cajuns’ only loss came at the hands of Texas in their season opener, and three of the four wins were by eight points or less.

Kickoff for Tuesday’s matchup is set for 7:30 p.m. at Cajun Field in Lafayette, Louisiana, and can be seen on ESPN2.