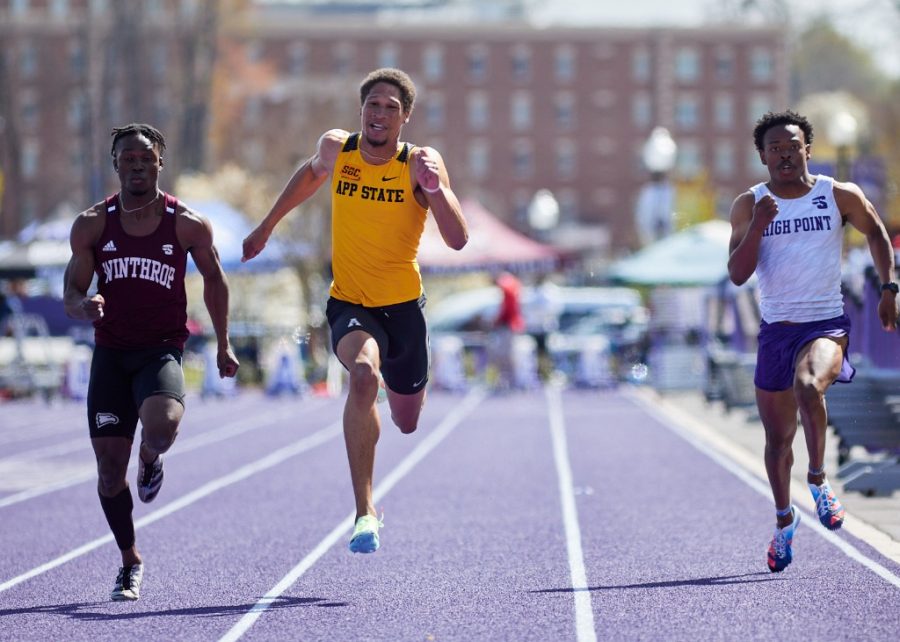 Graduate student De'Shawn Ballard sprints ahead of the competition in the men's 200 meter April 2, 2022.

App State track traveled down south to Auburn University for the War Eagle Invitational April 15-16. While the team did not record a podium finish, it was able to record 18 top 10 finishes.

On Friday, sophomore Ben Datte logged a new personal record in the men’s 3000-meter steeplechase with a 9:37.1-minute time. Freshman Jackson Nichols was hot on his tail and finished in ninth place with a 9:51.34-minute time.

Junior Jasmine Donohue finished in seventh place in the women’s 1500 meters after running a 4:30.77-minute time. This made Donohue sixth on App State’s all-time 1500 meters list.

In the women’s 3000-meter steeplechase, freshman Karsyn Kane zoomed to an 11:11.56 time, which was her personal record and netted her seventh place.

To close out Friday, freshman Daiyanna Cooper threw for a personal best 50.60-meters in the women’s hammer throw to finish tenth.

On Saturday, junior Eric Haddock Jr. bounded 14.75 meters to finish fourth in the men’s triple jump. In the men’s pole vault, junior Patrick Freeman also finished fourth after flying 4.69 meters. It proved to be a day of fours for the Mountaineers as Freeman’s pole vault attempt moved him to fourth on App State’s all-time pole vault list.

Sophomore Nathan Karl was consistent in the men’s discus and shotput. He finished ninth and 10th with attempts of 48.66 and 15.51-meters, respectively.

Ballard paced the Mountaineers in the men’s 200 meters when he finished in sixth place with a 21.33-second time.

In the women’s 100 meters, King sprinted for a personal best 11.77-second time and a seventh-place finish.

App State looks to add more top-10 finishes when they travel to Georgia Tech University for the Georgia Tech invitational Friday and Saturday.