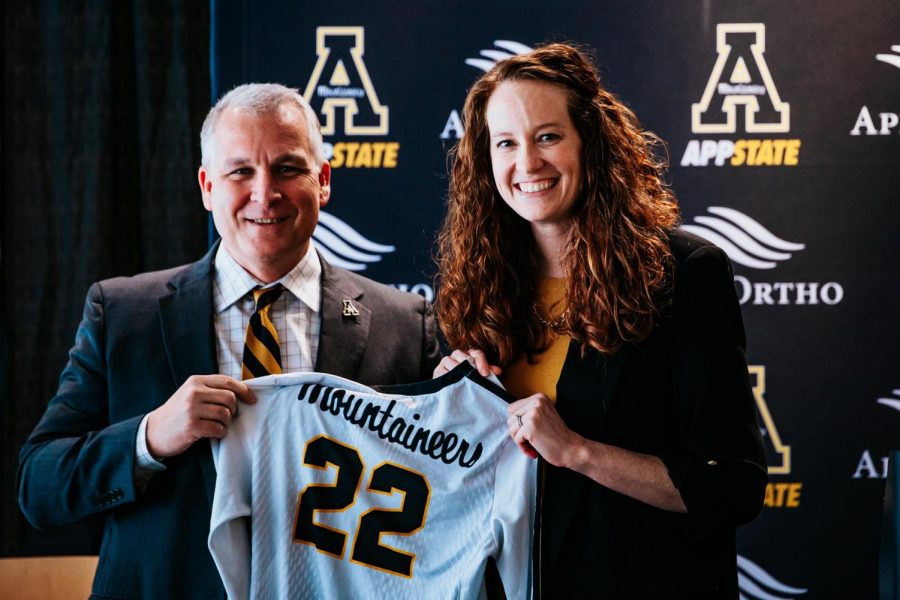 A new era is upon the Mountaineers as the volleyball season opener closes in. App State is excited to kick off the new season after hiring Sarah Rumely Noble as its new head coach.

“I want to build a culture of excellence,” Noble said. “We are going to chase great every day.”

Noble comes in as a former assistant coach and recruiter, most recently at Louisiana State University, where she is credited with bringing in the program’s top 25-ranked recruiting classes, along with speeding up offenses across the nation. Noble was just as talented as a player, becoming the University of Kentucky’s all time leading setter, leading the Wildcats to four straight NCAA Tournaments and being inducted into the Kentucky Athletic Hall of Fame in 2017.

“I think my journey at Kentucky has been a big reason that I am excited about this job,” Noble said. “Going to four NCAA Tournaments is a very, very quick turnaround that doesn’t happen very often in that way, and I am excited to work to build that here.”

The team announced their upcoming schedule for the 2022-23 season where the team looks to be competitive in the Sun Belt again after multiple losing seasons.

“Year one I really want to push and be in that top half of the league and find ways to win,” Noble said. “The expectations are we are winning the league and getting into the NCAA Tournament.”

The Mountaineers have an action-packed schedule, opening up the season with four tournaments, most notably the Mountaineer Classic. In the home opener, the team will welcome Texas A&M Commerce, Furman and Presbyterian for their first home games of the season Sept. 9-10.

“I am really excited,” Noble said. “I think the new teams coming into the Sun Belt … it is going to make it more competitive than it already is, and the expectations are high.”

The Mountaineers do have some challenges in front of them after losing a ton of talent with outside hitter Victoria Wilform and libero Emma Reilly graduating from the program. Noble has begun replacing them with two signings earlier in the year. Junior transfer outside hitter Cierra Huntley and true freshman libero Kenady Roper join the Mountaineers in 2022.

Huntley transferred from Virginia Tech after appearing in 16 matches, starting seven. She recorded 18 kills, 18 aces and 95 digs. In high school, the North Carolina native was a four-time letterwinner, an all-state athlete and was named 2019 Foothills Athletic Conference Player of the Year. She is also joining her brother, CJ Huntley, Mountaineer basketball player. Roper joins the Mountaineers as a true freshman after a very impressive high school career, posting over 1,600 digs over her career. She earned four All-Conference selections, 2018 and 2021 Defensive MVP nods and 2021 Mountain Foothills and 2A Conference Player of the Year accolades.

The team is excited to hit the court and show fans what the Mountaineer team truly is. They want fans to pack the stands to see some high energy, competitive volleyball.

“We are going to work hard to give them a product to be proud of,” Noble said. “That they want to be a part of as we build this and as we go.”