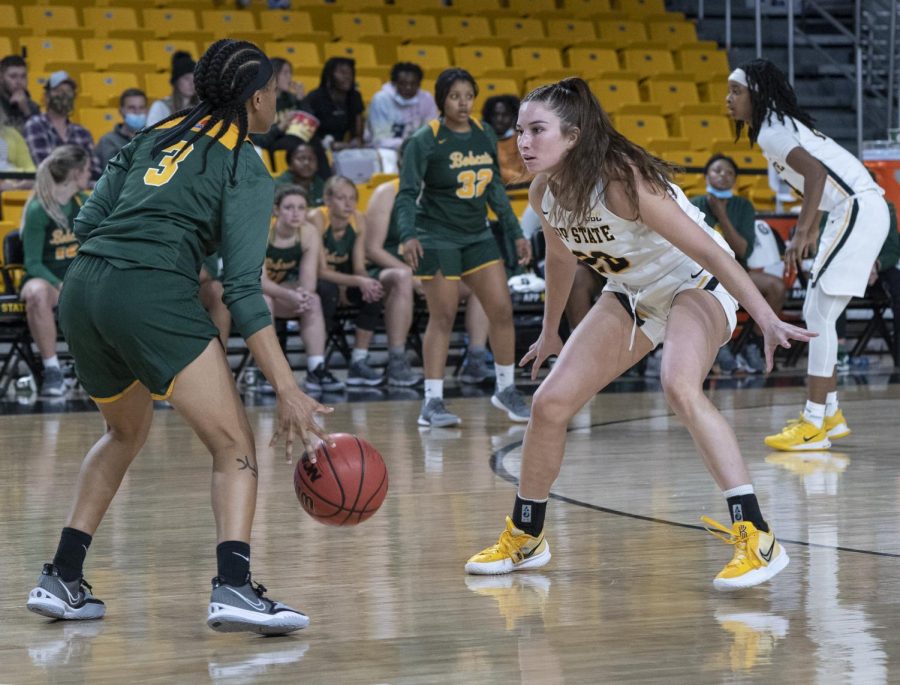 Senior guard Brooke Bigott defends Lees-McRae’s point guard at the top of the key. The Mountaineers forced 32 turnovers against the Bobcats.

The Mountaineer women’s basketball team took the court in Boone Tuesday for their first game of the season, a 75-41 win over Lees-McRae.

Super senior Michaela Porter led the team with 14 points while setting a new career high in steals with six. Sophomore guard Faith Alston also impacted offense, tying her career high in points with 13 to go along with five assists.

“I was just really pleased with the stuff we’ve been practicing and how they came out today,” head coach Angel Elderkin said.

“Any time we got it to her at the high post, great things happened,” Elderkin said about Alston’s impact on offense during the game.

The Mountaineers played strong defense throughout the third quarter, holding Lees-McRae to seven points for the quarter. After scoring the first points of the quarter, the Mountaineers went on an 11-7 run the rest of the third, bringing the game into the fourth with a score of 55-29 in favor of App State.

Alston opened the scoring in the fourth with a three to push the Mountaineer lead to 29 points. The Mountaineers continued their strong defense down the stretch, only allowing 12 points for the quarter while scoring 20 to give App State a 75-41 victory.

Freshmen Emily Carver, Zada Porter and Mariah Frazier all played over 10 minutes, while Adair Garrison scored the final two points for the Mountaineers in her three minutes in the game. Carver finished her 16 minutes of action with nine points, while Porter added six rebounds and three assists to go with her seven points in 18 minutes. Frazier saw 14 minutes of game time and contributed five points and one assist.

“They’re ready every time their number is called. They have confidence,” Porter said.