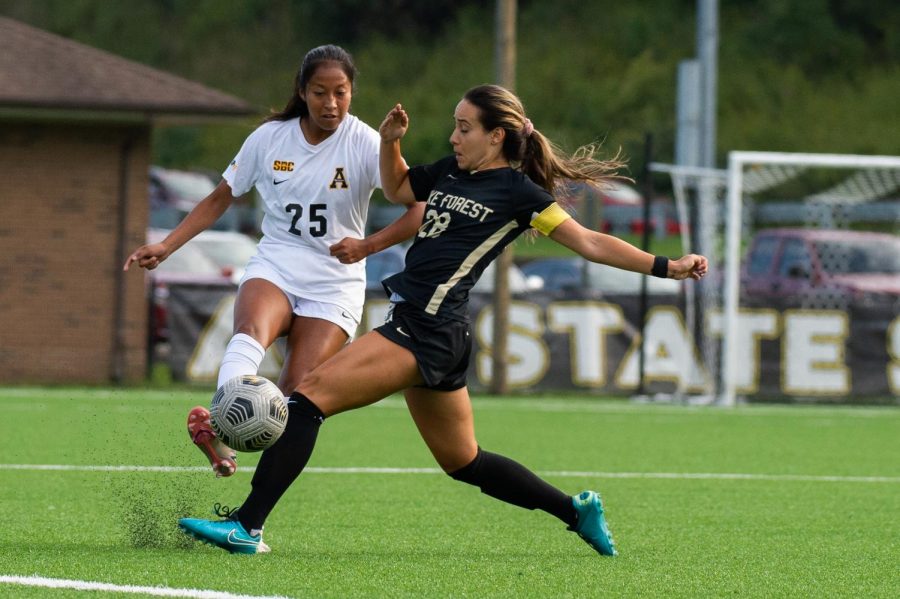 Freshman forward Stephanie Barbosa challenges Wake Forest’s Sofia Rossi in a 2-0 defeat to the Demon Deacons. After starting the season on the bench, Barbosa has since started the past six games for the Mountaineers. The freshman has recorded two assists and taken seven shots, two of which were on goal.

The Mountaineers traveled to Conway, South Carolina, Sept. 19 to take on the Coastal Carolina Chanticleers but fell short with a 2-1 defeat in overtime.

In the 10th minute, the Chanticleers had several chances to score, with multiple shots on goal, but junior goalkeeper Kerry Eagleston blocked all of them.

The Mountaineers had a great look to score in the 15th minute, but shots by junior Emma McGibany and senior Kirsten Seeley were both blocked by defenders before they crossed the line.

In the 30th minute, Coastal Carolina’s Sarah Allen put a shot up in the top corner, but an incredible save by Eagleston, who was named Sun Belt Conference Defender of the Week, prevented a goal from happening.

Just 90 seconds into the second half, Coastal’s Megan Brouse delivered a strike to the top right corner, just out of reach for Eagleston, to give the Chanticleers a 1-0 lead.

A corner kick opportunity in the 20th minute led to junior Olivia Cohen’s goal, which was assisted by freshman Sarah Widderich, to get the score to 1-1.

In the 25th minute, Taylor Tolsen of the Chanticleers just missed the post on a strike.

With 1:30 left in regular time, freshman Stephanie Barbosa played a ball across the box to freshman Avery Quoyeser for one last chance before the half ended, but it was saved and the game was sent into overtime.

Just over one minute into overtime,  Coastal’s Sarah Allen delivered a ball to Gianna Irungaray who headed it into the bottom left corner. The Chanticleers secured a 2-1 win over the Mountaineers.

The Mountaineers drop to 4-4-1 and 0-2 in conference play. The team looks to respond Sept. 26 against Georgia State, their first home game in three weeks.