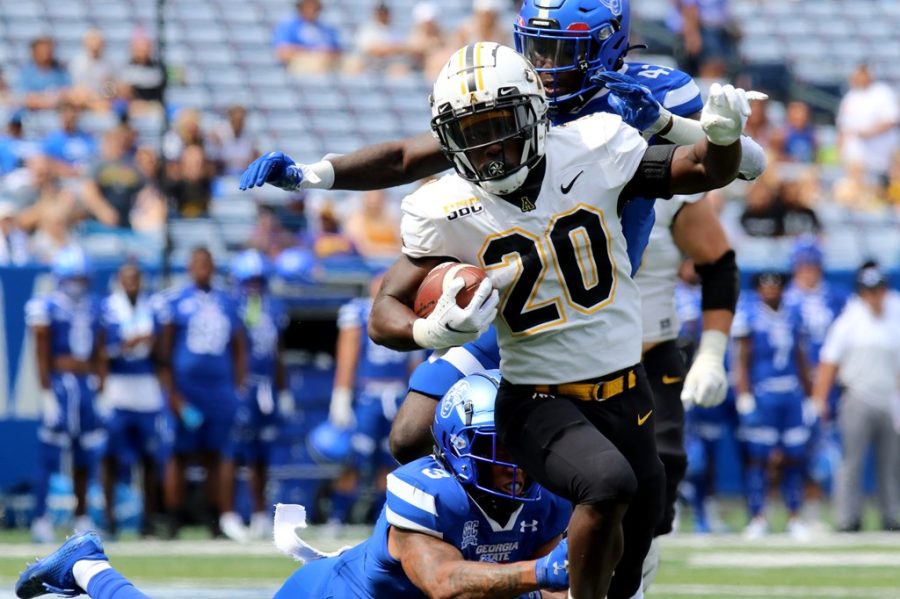 Sophomore Nate Noel eludes multiple Panthers as he racks up some of his 74 rushing yards on the day. Noel also ran in a 22-yard touchdown in the first quarter, his first score of the year.

“We had to play to our potential. We can’t play to the other team’s potential,” head coach Shawn Clark said. “That’s no disrespect to Georgia State, but we have a standard here at Appalachian State, and we have to make sure we play to that standard.”

“I knew coming in, playing against them in fall camp and spring, I knew they were going to be special,” sophomore running back Anderson Castle said. “It definitely brings a lot of momentum when they get big plays like that.”

The Panthers responded in the second quarter with a 12-play, 54-yard drive deep into App State territory. After senior linebacker D’Marco Jackson batted down a pass headed to the end zone on 3rd-and-goal, Georgia State settled for a 23-yard field goal.

The Mountaineers scored again in the second quarter on a 4:27-long drive where they converted three third downs on their way to the end zone. The drive culminated in a 33-yard touchdown connection between quarterback Chase Brice and super senior receiver Malik Williams.

“We had other guys step up and make plays like C-Dub, and then we’re hitting me, Malik, Henni,” super senior Corey Sutton said. “We’ve got so many guys, so many weapons. Spreading it across the board like that, you can’t double anybody.”

Georgia State struck last in the half, knocking through a 32-yard field goal with 1:55 left to play. App State ran out the clock and entered the halftime locker room with a 14-6 lead.

“We didn’t play good the first half,” Clark said. “We had to come in and have a little heart-to-heart conversation, just coach and player. Our kids responded.”

Georgia State opened the second half with an 11-play, 84-yard drive that was stopped short by stout Mountaineer defense. Despite numerous trips to the redzone, the Panther offense only scored one touchdown. The home team settled for another field goal, bringing the score to 14-9.

App State wasted no time responding, going 79 yards to the house on the first play of its eighth drive. Brice unleashed a 79-yard touchdown pass to Sutton, pushing the lead to 12.

“Chase had a great ball,” Sutton said. “I knew I had to get a long run on film. I hadn’t had one yet this year, so I was like ‘I’ve got to score. They’re going to think I’m slow.’”

The Mountaineers scored on all four of their next drives. Following a 48-yard field goal from super senior kicker Chandler Staton, super senior quarterback Jacob Huesman tossed a 5-yard touchdown pass to junior tight end Miller Gibbs. Huesman entered the game after a Georgia State defender delivered a massive hit on Brice, sending the starter to the bench for the remainder of the drive. The defender was ejected for targeting.

“I know he’s always ready,” Brice said of Huesman. “He prepares like the starter. Great person overall and a great player.”

Brice checked into the game for the next drive and immediately found sophomore receiver Christian Wells who took a short pass 80 yards to the house. Castle scored next for the Mountaineers, bouncing off numerous defenders on his way to a 22-yard touchdown.

“I’m proud of him. He’s a true Mountaineer,” Clark said of Castle. “He comes to work every day, doesn’t complain. He’s not getting playing time. He’s on all four special teams units, and today he was our number one running back in the second quarter.”

Georgia State scored on a 66-yard touchdown pass before App State ran the clock out, ending the game 45-16.

“This is my last year, so I wanted to come out and put everything on the line,” Sutton said. “We’re coming together really good as a group. Every week we’re getting better and better.”

Jackson racked up nine tackles, including one sack, two tackles for loss, one interception and one pass breakup. The Mountaineers also returned super senior defensive back Kaiden Smith, who missed the beginning of the season with injury. Smith posted four solo tackles in his season debut. The App State defense came away with three interceptions on the day.

“He’s like another coach out there,” Jolly said of Smith. “We all love him out there. He can make a check quicker than a coach can from the sideline. He just brings everybody together.”