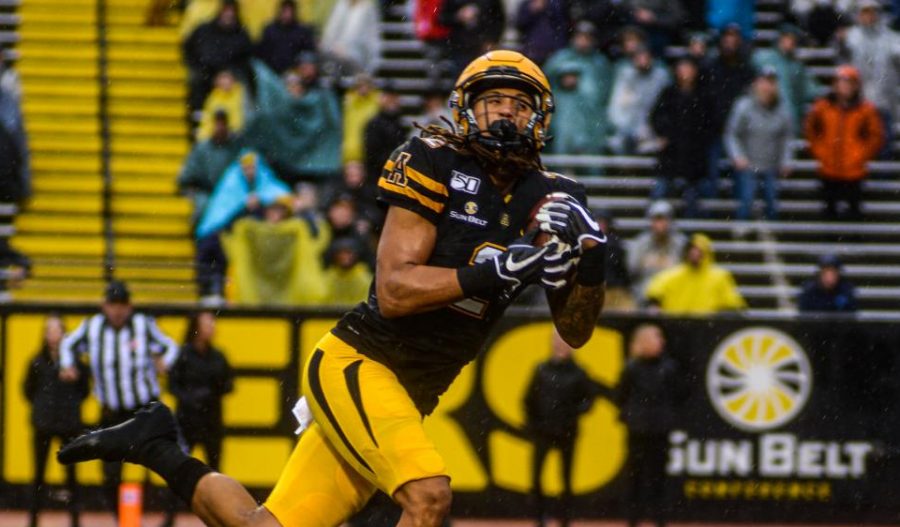 App State wide receiver Corey Sutton scores a touchdown in the first quarter of App State's 35-13 win over Texas State in 2019. On Sept. 1, Sutton announced he was opting out of the 2020 season.

Saturday was much more than an ordinary gameday in Boone, it was Senior Day for a record-setting senior class.

“It was just special, man,” fifth-year senior offensive lineman Victor Johnson said. “I’m definitely going to miss playing at The Rock, playing here is crazy, so hopefully we get one more here.”

Seventeen Mountaineers were honored before kickoff of the 35-13 victory over Texas State. The 22-point win marked the 51st victory in 63 games for the distinguished senior class.

“Seeing all of the hard work that me and E.J. (Scott) and all the other seniors put in, and just seeing it show up on the field…it just means the world to me,” senior linebacker Noel Cook said.

With the win over Texas State and the Georgia Southern loss, App State is the Sun Belt East Division champion.

Junior wide receiver Corey Sutton caught the first score of the game with 7:09 left in the first quarter on a 45-yard bomb from junior quarterback Zac Thomas. The touchdown put the Mountaineers on top 7-0 on the Bobcats.

Early in the second quarter, Corey Sutton fumbled the ball after taking a huge hit. Sutton remained on the turf in pain, holding his left knee before being helped off the field. He was later carted to the locker room with a towel covering his head and ice wrapped around his left knee.

“Corey’s one of the best wide receivers in the country,” head coach Eliah Drinkwitz said. “We’ll know more tomorrow and Monday as we gather more information, but it’s devastating for us.”

It wasn’t until the 12:43 mark in the second quarter that Texas State would get on the board when Texas State kicker Josh Rowland nailed a career-long 48-yard field goal.

Graduate transfer Keishawn Watson caught his first touchdown as a Mountaineer on a 19-yard pass. The senior displayed his body control on the reception as he maneuvered around the defender and barely kept his toes in bounds as he made the grab to put App State up14-3.

The Bobcats responded with a quick 3-play, 65-yard drive resulting in a 53-yard touchdown pass. The score came just three seconds before the end of the half, and brought Texas State within four points of the Mountaineers at 14-10.

Texas State struck first in the second half when Rowland knocked through another field goal to make it 14-13. The App State lead was cut to just one with 9:05 left in the third quarter.

However, with 7:52 remaining in the third quarter, the No. 24 Mountaineers began an onslaught that would continue through the end of the game.

Cook triggered the run when he picked off the Bobcat quarterback. Senior defensive lineman E.J. Scott tipped the pass and it fell right into the hands of Cook.

“It just felt really good to go out there and provide the momentum we needed,” Cook said. “I credit that to E.J. If he didn’t deflect the ball down, that play wouldn’t happen.”

Junior running back Darrynton Evans ran in a 13-yard touchdown, and then followed that with another 10-yard touchdown run at the end of the quarter. The lead suddenly grew to 15 for the Mountaineers at 28-13 heading into the final quarter.

Evans continued his barrage with a third consecutive touchdown run. This one was another 13-yarder and put App State up 35-13 with 6:26 to play.

The clock expired after several defensive stops, resulting in a 35-13 victory for the Mountaineers.

“He’s an elite tailback, obviously,” Drinkwitz said. “He’s one of the most dynamic players in college football because of his speed and returnability.”

The Mountaineers will finish off the regular season with a road trip to Troy, Alabama, where they’ll take on the 5-6 Troy Trojans.