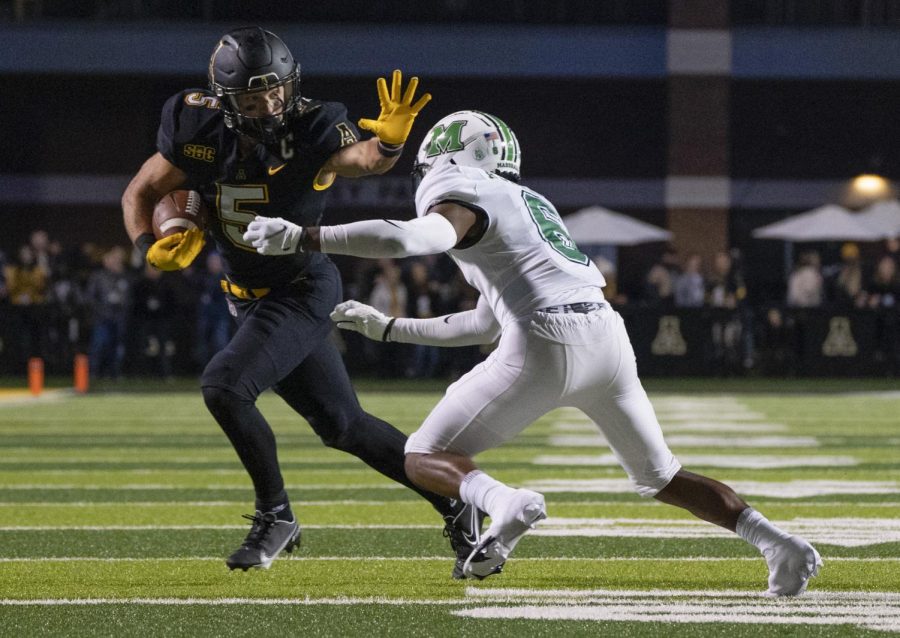 Super senior receiver Thomas Hennigan stiff arms a defender on one of his nine receptions on the night. Hennigan caught nine of his 10 targets, racking up 123 receiving yards against the Thundering Herd.

App State took down Marshall in a narrow 31-30 Thursday night victory in Boone. The Mountaineers avenged one of three losses from the 2020 season where Marshall defeated No. 23 App State 17-7.

“People ask me all the time, ‘Is this a revenge game?’” head coach Shawn Clark said. “It wasn’t a revenge game. It was a reckoning game. A revenge is emotional. A reckoning is something you go out and kind of put to bed. We came out and put all the talk to bed.”

After the Mountaineer defense opened the night forcing a quick three-and-out, quarterback Chase Brice led his offense onto the field and drove 80 yards in nine plays, capped off with a 1-yard rushing score from junior Cam Peoples.

For the first time this season, the Mountaineers scored before their opponent.

However, the momentum quickly halted for App State as Marshall’s defense forced the Mountaineers to punt on their next two drives. The Thundering Herd took advantage of the stout defensive play, scoring on all three of their subsequent drives. Back to back field goals and a 56-yard bomb from Marshall quarterback Grant Wells jolted the Herd six points ahead, 13-7 over the Mountaineers.

“You have to give them credit. They were putting us in some tough situations to make plays,” Clark said. “We know that they’re going to make their plays, but I have total confidence in our defense that they’ll make the final play.”

App State responded with a 15-play, 75-yard drive that featured numerous third down conversions and one fourth down conversion on a 3-yard Peoples run. Peoples completed the drive with a 2-yard dive, punching in his second touchdown in front of a roaring crowd. The Black and Gold went back on top 14-13.

“Look at that crowd. Our fans were unbelievable tonight, on a Thursday night,” Clark said. “Boone was electric, and The Rock, it was on point.”

Marshall wasted no time retaliating, taking the ensuing kickoff 97 yards to the house. The Thundering Herd regained the lead 20-14 with 7:01 left in the period.

The Mountaineers refused to back down, marching down the field for a quick score before the half. Peoples finished his big half with a third touchdown run, this one from three yards out. App State ran into the locker room with a 21-20 lead.

The Mountaineers opened the second half turning the ball over on consecutive possessions. Five minutes into the third quarter, Brice tossed a 50/50 ball to super senior receiver Corey Sutton that was picked off. On the next App State drive, Peoples fumbled on a short dive play and spent the rest of the game on the bench with an ankle injury. Marshall capitalized on both Mountaineer mistakes, scoring a field goal and a touchdown to go up 30-21.

“You have to keep on fighting,” Clark said. “That’s what this program is about. We’re going to fight until the very end.”

On App State’s 10th drive of the game, Brice and Sutton connected twice for 61 yards, including a 24-yard tiptoe touchdown. Sutton’s catch was featured as the No. 1 play on SportsCenter’s Top 10  plays the next morning.

“I didn’t really know on this one if I was in for sure until, I was just watching the ref, until I seen his arms go up,” Sutton said. “I definitely practice it. I feel like I’ve got a good understanding of where my foot is when it’s still kind of in bounds a little bit.”

Down by two points, App State’s defense held firm and forced a missed field goal with 10 minutes remaining in the fourth quarter. The Mountaineers took over on their own 20-yard line with a chance to take the lead. Brice scrambled for two first downs, marching the Mountaineers down to the Marshall 28 before stalling and bringing out super senior kicker Chandler Staton for a 45-yard potential game-winning attempt. The Gainesville native drilled the kick and put the Black and Gold up by one.

“It’s all habit at this point,” Staton said. “I just try to stick to that exactly and don’t think about anything else.”

The Mountaineer defense blew up any hope of a game-winning drive for the Thundering Herd, forcing a fourth-and-16 at the Marshall 48-yard line. The visitors punted the ball away with 4:00 to go and never saw the ball again. Sophomore running back Nate Noel ran for first down after first down, getting all the way to the Marshall 5-yard line before intentionally sliding down so that the Mountaineers could run out the clock.

“We have a play for that. We practice that same exact play,” Clark said. “That smart heads-up play by Nate Noel gave us a chance to win tonight.”

Senior linebacker D’Marco Jackson headlined the defensive effort with 14 tackles and one tackle for loss. Sophomore linebacker Jalen McLeod added four total tackles, half of which were for loss.

The Mountaineers travel to Atlanta next weekend to take on the Georgia State Panthers. The game will be broadcast live on ESPN+ Oct. 2 at 2 p.m.