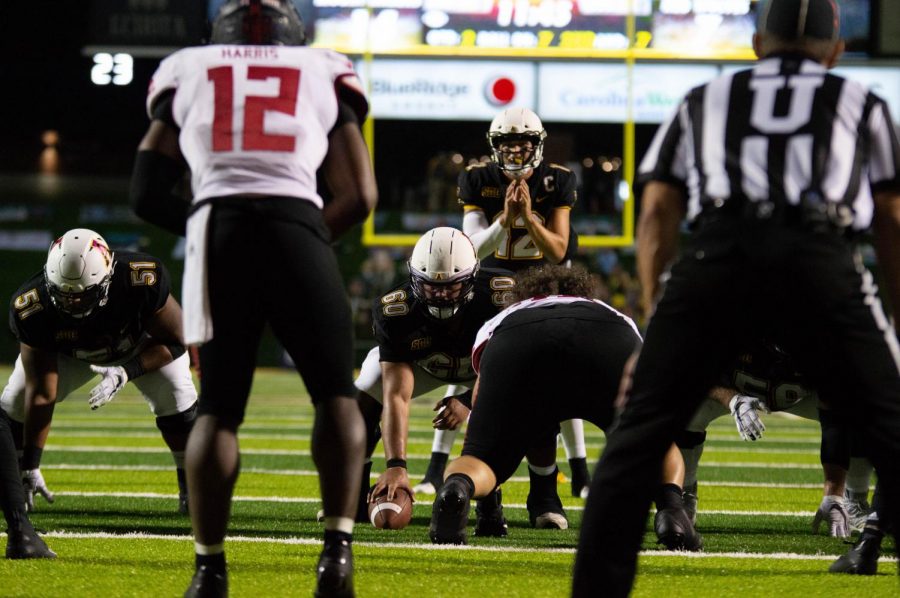 App State quarterback Zac Thomas prepares to take a snap from center Noah Hannon in App State's 45-17 win over Arkansas State Oct. 22. Thomas led the Mountaineers with 216 yards and four TD's through the air, along with 82 yards and a TD on the ground.

Although it looked a little different than normal years, App State football did something for the first time in 2020 during Thursday night’s 45-17 win over Sun Belt foe Arkansas State: play a game at Kidd Brewer Stadium in front of fans.

“It’s just a different feeling when you have fans out there to support you, even if it’s 2,100,” senior quarterback Zac Thomas said. “I think it gave us life especially when big plays happened, those guys cheering for us, not only just our teammates but the people in the stands.”

Under Gov. Roy Cooper’s guidelines, The Rock was open at 7% capacity and 2,100 fans attended. The audience was made up of 800 students, 650 season ticket holders, 450 family members of players and 200 others. Most of the student section remained socially distant throughout the game.

“The fans here, that’s what makes this place so special,” head coach Shawn Clark said. “If it was under normal circumstances, I think it would be a sold out crowd, but we’ll take 2,100.”

River Willis, an App State junior who attended the game, said he was happy to be back at The Rock for the first time this year. He said that although the stadium wasn’t as crowded as it usually is, the overall gameday atmosphere felt “pretty similar” to that of a non-COVID year.

“It felt great to be back there. Honestly, it had been a little depressing not being able to be there,” Willis said. “For 2,100 people, I thought it was pretty loud. I was proud of everyone for staying there and cheering the entire game.”

In action for the first time in 26 days, App State took care of the Red Wolves behind five total touchdowns from Thomas and a stingy all-around defensive performance on ESPN’s primetime Thursday night slot. App State’s last two games were postponed due to active COVID-19 cases.

Because of the Mountaineers’ long break, a lot of the focus in the Sun Belt shifted to Louisiana and No. 25 Coastal Carolina, who was ranked in the latest AP Poll.

“You lose in this conference, basically you’re out of the running,” senior defensive lineman Demetrius Taylor said. “We just felt like we needed to show that we’re still the reigning champs. Everybody’s not talking about App State, they’re talking about Coastal, Lafayette, everybody else, but you still gotta come through Boone.”

Coming into tonight’s game, Arkansas State had scored over 50 points in back-to-back wins. The Mountaineers limited the high-powered Red Wolves offense to just 2.1 rushing yards per carry and 4-for-16 on third down conversions. The App State defense also totaled six sacks, 12 tackles for loss, five pass breakups and two interceptions— both by Junior linebacker D’Marco Jackson.

“Our defense was lights out tonight, and they really came to play,” Clark said. “That’s a high-powered offense we faced tonight and our guys did a great job of keeping things in front.”

Along with Thomas’ five touchdowns, junior running back Daetrich Harrington rushed for 137 yards and a touchdown on 18 carries. Senior wide receiver Malik Williams hauled in six catches for 78 yards and a touchdown, while redshirt freshman Christian Wells caught all three of his targets for 80 yards and a pair of touchdowns. Seven Mountaineer receivers caught passess in the game.

A third down sack by App State senior defensive end Caleb Spurlin forced the Red Wolves to punt it away on the opening possession, setting up the Mountaineer offense to drive 85 yards for a touchdown to take an early 7-0 lead. Wells capped off the scoring drive on a 46-yard TD reception over the middle for the second score of his career.

Wells said coach Clark had been on him all week about stepping up and making a bigger impact for the offense.

“I just told myself, ‘OK, I gotta step up,’ and I just took that with me,” Wells said. “I kind of had a chip on my shoulder for this game.”

The Red Wolves’ offense answered back on their ensuing possession with a touchdown of their own. On fourth down in the red zone, Arkansas State redshirt sophomore quarterback Layne Hatcher scrambled for a first down to extend the drive, setting up redshirt senior running back Jamal Jones for a game-tying 8-yard rushing score with 6:26 to go in the first quarter. The App State defense would hold the Red Wolves scoreless for the remainder of the first half.

The Mountaineers regained the lead on their next possession, when Harrington got around the edge and turned on the jets, sprinting 55 yards for the touchdown to put App State up 14-7.

With less than 11 minutes left in the second quarter, senior tight end Mike Evans caught the first touchdown of his career, a 5-yard pass from Thomas to push the Mountaineer lead out to 21-7.

The Mountaineers gave it right back to the Red Wolves on the next play on an interception thrown by Thomas. Arkansas State had a chance to put more points on the board with a 24-yard field goal attempt, but kicker Blake Grupe missed the try wide left.

After App State got the ball back, senior running back Marcus Williams broke free for 53 yards before Arkansas State forced a fumble and recovered at the 27 yard line. Williams did not receive another carry in the game.

After stopping the Red Wolves on fourth down, App State senior kicker Chandler Staton hit a 39-yard field goal to give the Mountaineers a 24-7 lead with 4:39 left in the first half. App State scored once more before halftime on a 16-yard touchdown pass from Thomas to Williams that gave the team a 31-17 advantage heading into the second half.

Arkansas State came out swinging in the third quarter with 10 unanswered points, courtesy of a 34-yard field goal from Grupe and a 48-yard touchdown run from running back Lincoln Pare. This cut the lead to 31-17 with 2:08 left in the third quarter. The Red Wolves looked to keep momentum with an onside kick attempt on the next kickoff, which they recovered. However, a sack apiece from Taylor and Shaun Jolly helped force a three-and-out and give the ball back to the Mountaineers.

On the next drive, Thomas hit the gas on third and fourteen for a 60-yard rushing touchdown to give the Mountaineers a 38-17 cushion with 15 seconds left to play in the third quarter.

“It just parted like the Red Sea right there,” Thomas said. “Heck of a job by Malik (Williams) out there out wide, (he) made two key blocks right there.”

App State held the Red Wolves scoreless for the remainder of the game, but the Mountaineers found the endzone one last time on a 20-yard touchdown pass from Thomas to Wells with 8:22 left to play, ultimately helping secure the 45-17 win.

“Our players embody what a Mountaineer is and they showed resilience tonight,” Clark said. “I can’t say how proud I am of our players, our program, our coaches to be off for 25 days and people weren’t sure if it was the right thing to do, but we had a great plan.”