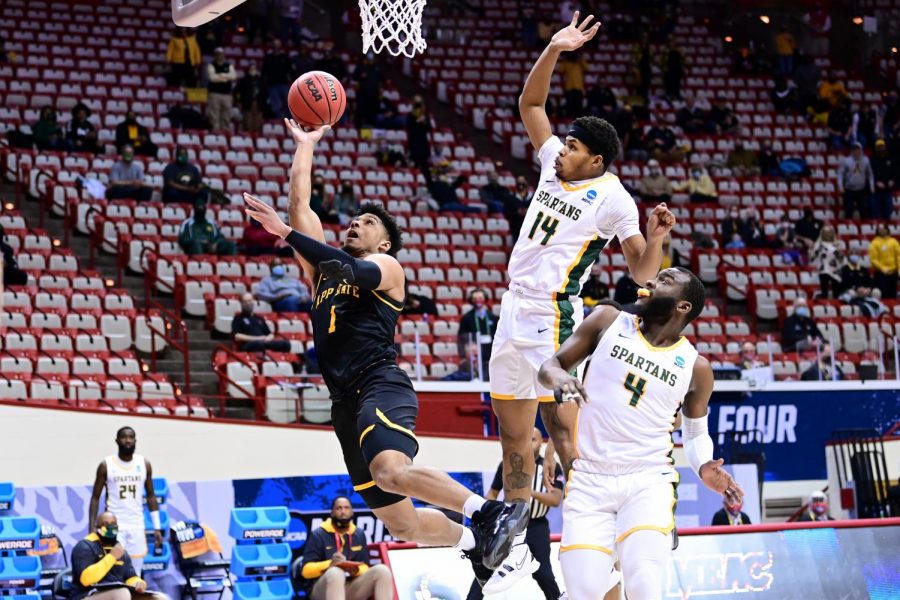 The Mountaineers ultimately fell 54-53 in a thriller that came down to the wire in the First Four matchup Thursday night at Assembly Hall in Bloomington, Indiana. It was App State’s first NCAA Tournament appearance in 21 years.

“It’s tough. Man, we wish we could have this one back, for sure,” senior guard Justin Forrest said postgame. “It’s just tough. I mean, yeah, we’re proud to get here, but we know we belong. We just wish the outcome was different, and it’s just a tough pill to swallow.”

Despite trailing Norfolk State by 18 early in the second half with its back firmly against the wall, App State scrapped all the way back, even holding a 6-point lead at one point with less than six minutes to go.

“We’re never out of it. We’re going to fight and (play) 40 minutes, whether we’re up or down,” App State head coach Dustin Kerns said. “I’m proud of our guys’ fight and togetherness and how connected they are, because you have to be that way.”

With 8:38 left in the second half, App State grad transfer guard Michael Almonacy knocked down a pair of free throws to trim the deficit down to just 2 at 45-43.

After a couple of stops on defense, Forrest caught fire, nailing a triple from the wing to give the Mountaineers their first lead at 46-45. After that, he knocked down another 3-pointer, and then finished a layup for a personal 8-0 run to give his team a 51-45 lead with 5:47 to play.

Norfolk State scored the next 7 to edge back in front at 52-51 with three minutes left. Both teams went scoreless for the next two, before App State junior guard Adrian Delph hit two free throws to give the Mountaineers their final lead of the game at 53-51. The App State defense got a stop and had a chance to extend their lead, but couldn’t convert.

Norfolk State senior guard Devante Carter got out on a break and drew a foul on a layup with eight seconds left. He hit both free throws, and App State got one more possession. The Mountaineers inbounded the ball and Almonacy sprinted across halfcourt and called a timeout, giving App State a chance to run a side out of bounds play with the game on the line.

Kerns said the play he drew up was for Forrest to get a back-cut and a layup, but the Spartans defense forced the Mountaineers into a broken play, which almost worked.

“They made the entry very difficult and it just became a broken play,” Kerns said.

Almonacy inbounded it to sophomore wing Donovan Gregory near the corner, and Almonacy’s man collapsed to Gregory, giving him just enough room to get off a contested 3-pointer. The miss ricocheted out to Forrest who had one last look, but it fell short, and Norfolk State survived.

I repeat.. Basketball is so emotional 🥺… #MarchMadness BIG congrats to @NSU_BBALL!! pic.twitter.com/gU9zffLgqI

Forrest finished with a team-high 18 points and was App State’s only double-digit scorer.

“We’re always the underdog, being a mid-major,” Forrest said. “I feel like a lot of people don’t really respect us, but I love this team. I love what we were able to accomplish this year, I love playing with these guys, I love playing for these coaches.”

Junior guard Jalen Hawkins led the Spartans with 24 points and was the story of the first half, catching fire for 20 points, including 4-for-4 on 3-pointers in the period. Junior guard Joe Bryant Jr was the only other Norfolk State double digit scorer, finishing with 10 points and four steals.

The game was a tale of two halves for the Mountaineers, as they literally couldn’t get a 3-pointer to fall and trailed 36-20 at halftime.

“We know we didn’t have the best first half, and it’s tough when we come out and miss shots that we normally make in a game like this that you really want to win,” Forrest said.

The Mountaineers then shot 6-18 on 3s in the second frame and only turned it over four times, outscoring the Spartans 33-18.

Norfolk State advanced to take on No. 1 overall seed Gonzaga on Saturday in the round of 64.

App State’s season is over, but the Mountaineers took plenty of stairs on their way to the history books in a 2021 season unlike any other.

“I think that this will give our program a huge boost in the community, on campus, with our students,” Kerns said. “It should carry momentum with a lot of excitement into next season.”