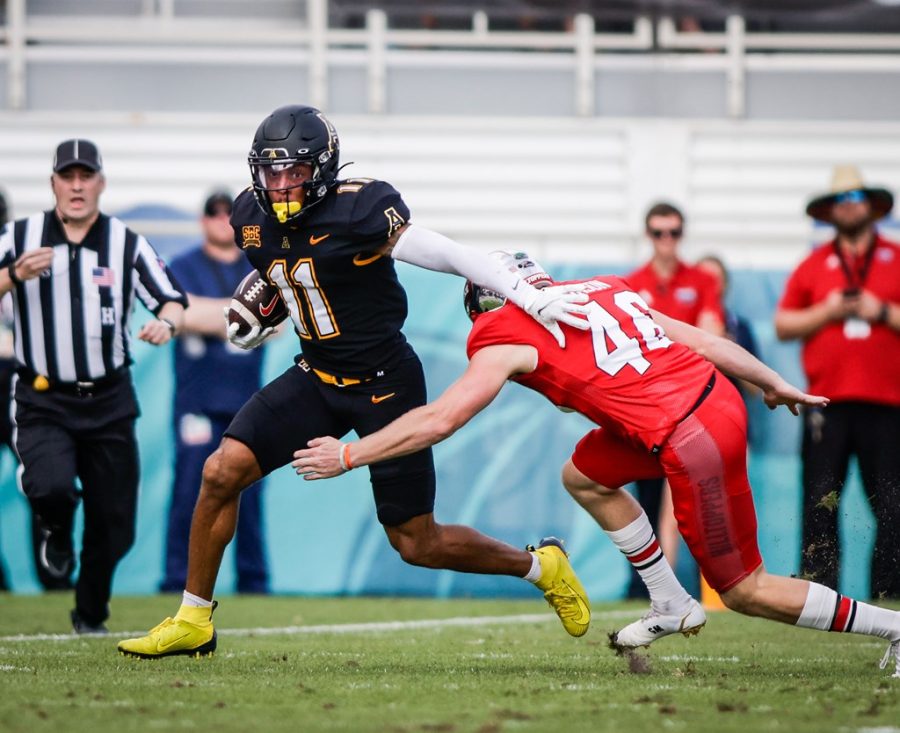 Super senior receiver Jalen Virgil sprints past a Western Kentucky defender en route to the end zone. Virgil caught three passes for 75 yards and one touchdown in his final game as a Mountaineer.

“They made more plays than we did,” head coach Shawn Clark said. “We’re in position to make plays and don’t make plays. We have three turnovers. That’s the story of the game.”

Several Mountaineers played their final game in black and gold, including sixth-year seniors like receiver Jalen Virgil and defensive lineman Caleb Spurlin. Those that spent six years in Boone finished their careers with a 62-17 record, four Sun Belt Championships and five bowl victories.

“I’m very proud of our team to win 10 games in a season. That’s hard,” Clark said. “Those seniors will leave a legacy.”

Western Kentucky entered the matchup with an FBS-best passing attack and showed it early. The Hilltoppers threw the ball on all eight plays of their opening drive and marched 76 yards for a score.

Western Kentucky wasted no time in responding as Hilltopper quarterback Bailey Zappe found receiver Mitchell Tinsley for a 75-yard touchdown on the first play of their ensuing drive. Five plays later, the Mountaineers scored on a 60-yard Virgil dash to the end zone.

“I feel like we played well as an offense,” Virgil said. “I think it all came down to us having those turnovers. That happens in games, but unfortunately, that was a big turn in the game.”

After App State’s defense forced Western Kentucky into a 24-yard field goal, the Mountaineers took their first lead on another touchdown pass from Brice. This time, Brice found sophomore receiver Dashaun Davis for a 33-yard score, taking a 21-17 lead.

Zappe threw another touchdown and Mountaineer super senior kicker Chandler Staton drilled his 20th field goal of the season, a new program record, to tie the game again at 24 apiece. Western Kentucky struck one last time before the intermission on an ​​eight-play, 78-yard drive that culminated in a 10-yard touchdown pass.

Zappe surpassed the FBS record for single-season passing yards and tied the record for most touchdowns in a season as the Hilltoppers took a 31-24 lead into halftime.

“You had to pick your poison with the quarterback … there’s a reason he set the NCAA record today for all-time touchdowns passes,” Clark said. “It was perfect throws. It wasn’t like there was a bad throw today. He was on point today.”

App State received the second half kickoff and marched down to the Western Kentucky 14-yard line before junior running back Cam Peoples fumbled on a 19-yard rush. The Hilltoppers immediately capitalized on the Mountaineer mistake with an 86-yard touchdown sprint by running back Noah Whittington.

“To win games like this, versus quality opponents, you can’t turn the football over,” Clark said. “That’s a big story of the game, the turnovers.”

Western Kentucky extended its lead to 45-24 by the 5:56 mark before App State scored again. On the first play of the Mountaineers’ ninth drive, Brice laced a 62-yard touchdown pass to sophomore receiver Christian Wells to claw within 14 points of the Hilltoppers.

Trailing 52-31 early in the fourth quarter, App State elected to attempt a fourth down in the red zone but failed to convert. The Mountaineers scored their final touchdown on a nine-yard rush by sophomore running back Anderson Castle with 2:17 to go and lost 59-38.

“They torched us, man. Their route concepts were all working,” Kaiden Smith said. “They had a good scheme, and they had great players, and that’s just how it went.”

On defense, super senior defensive back Kaiden Smith led the way with 10 total tackles and one tackle for loss. Senior linebacker T.D. Roof added seven tackles and 0.5 tackles for loss as the Mountaineers gave up 637 total yards of offense, including 422 passing yards.

“Every year there’s question marks for us on the defensive side when people leave, who’s going to step in, who’s going to fill in,” Smith said. “Since I’ve been here, everyone’s always answered the call, so I think you just expect big things out of those positions that we have leaving.”