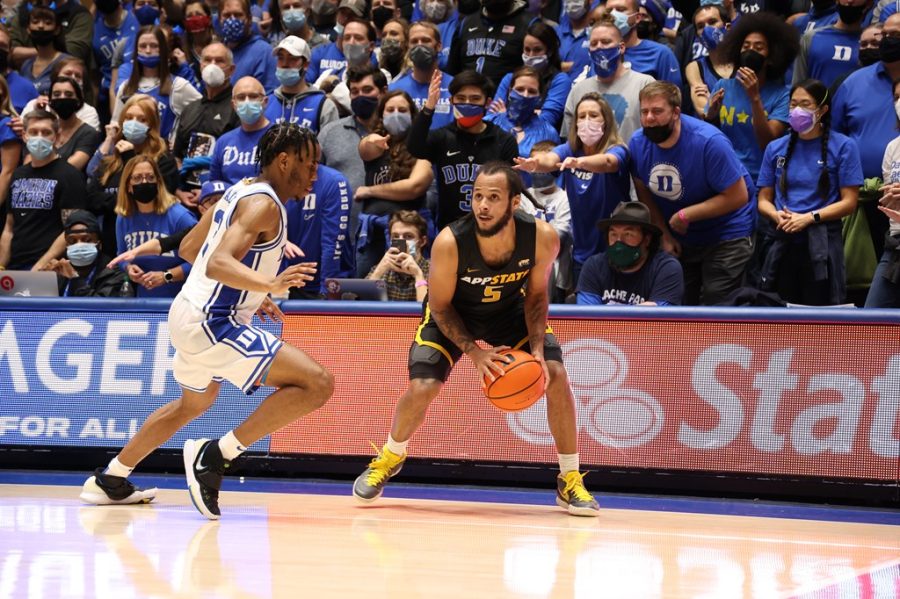 Super senior Michael Almonacy stares down the basket as the Cameron Crazies heckle him. Almonacy led the Mountaineers with 17 points.

App State men’s basketball traveled to the Triangle to take on No. 2 Duke and North Carolina Dec. 16 and 21. The Mountaineers came up short in both contests, losing by a combined 45 points.

“I thought we had to force them to play well,” head coach Dustin Kerns said. “We did some good stuff. I’m proud of our team for handling the electricity, the experience.”

App State kept the game tight the first 24 minutes before Duke took control of the game. Early on, there were 11 lead changes and three ties, and the Mountaineers were down just five points with 16:05 remaining in the second half.

“I thought we got off to a really good start, and I thought we battled,” Kerns said. “I’m really proud of our battle.”

The Blue Devils blitzed the Mountaineers with a 9-0 run in 54 seconds and grew the lead from there, winning 92-67.

To account for the height deficit, App State fronted the post and sent double teams down low, making it difficult for Duke’s big men to be effective. As a result, the Blue Devils found constant open looks from three, knocking down 15 of their 30 attempts from behind the arc.

“When Duke shoots the ball like that, that’s why they’re the No. 2 team or better in the country,” Kerns said. “Hats off to them.”

Super senior guard Michael Almonacy led the way for the Mountaineers early, scoring 17 points in the first 10:44 of the game, but Duke held Almonacy to zero points for the remainder of the contest. Super senior guard Justin Forrest aided Almonacy in scoring, adding 16 of his own, nine of which came from the foul line. Four Mountaineers finished in double figures.

“I learned that I’ve got a good team, and this will just make us better,” Kerns said.

One positive for App State was its effort on the glass, outrebounding Duke 31-30 despite the size disadvantages. The Black and Gold also finished with 13 offensive rebounds to Duke’s seven. The Mountaineers followed Duke’s dance Tuesday night against  one of the nation’s top rebounding teams: the Tar Heels.

App State started strong in its matchup against North Carolina, jumping out to a 7-3 lead. The Tar Heels responded with a 10-0 run and never looked back, holding the advantage for the remainder of the game.

Early on, the Mountaineers moved the ball well offensively and contained North Carolina’s 6-foot-10 forward Armando Bacot inside the paint. However, App State’s strong interior defense allowed the Tar Heels to get open looks from three and make a few runs to extend their lead.

Midway through the first half, App State began struggling to score the ball, resulting in many contested three-point attempts, very few of which fell. Despite the early woes, the Mountaineers only faced a 35-27 deficit heading into halftime. The team shot 11-30 from the floor and 3-15 from three but forced seven turnovers from the Tar Heels.

In the second half, both teams traded baskets for a few possessions before North Carolina exploded out to a 15-2 run that put the Tar Heels up 58-35. A shot from Donovan Gregory stopped the bleeding momentarily, but his efforts weren’t enough. Bacot found his rhythm en route to a 16-point, 10-rebound performance after a quiet start to the game. Three-point shooting for the Tar Heels opened up as the team shot 7-16 from beyond the arc, fueling them to a 70-50 victory.

Gregory finished with a game-high 18 points on 8-12 shooting and nearly had a double-double with nine rebounds. Senior guard Adrian Delph made some shots early on but struggled the rest of the game, finishing with 10 points on 4-16 shooting and 2-10 from three.  Almonacy added just four points, making only two of 13 shots and missing all eight of his three-point attempts.

As a team, App State shot a meager 4-30 from three and 20-64 overall, compared to North Carolina’s 29-62 shooting performance. The Tar Heels also outrebounded the Mountaineers 47-33 and won the points in the paint battle 38-28.

App State wraps up its non-conference schedule at 6-7 and now looks ahead to conference play. The Mountaineers begin their conference slate at home against Louisiana Dec. 30.