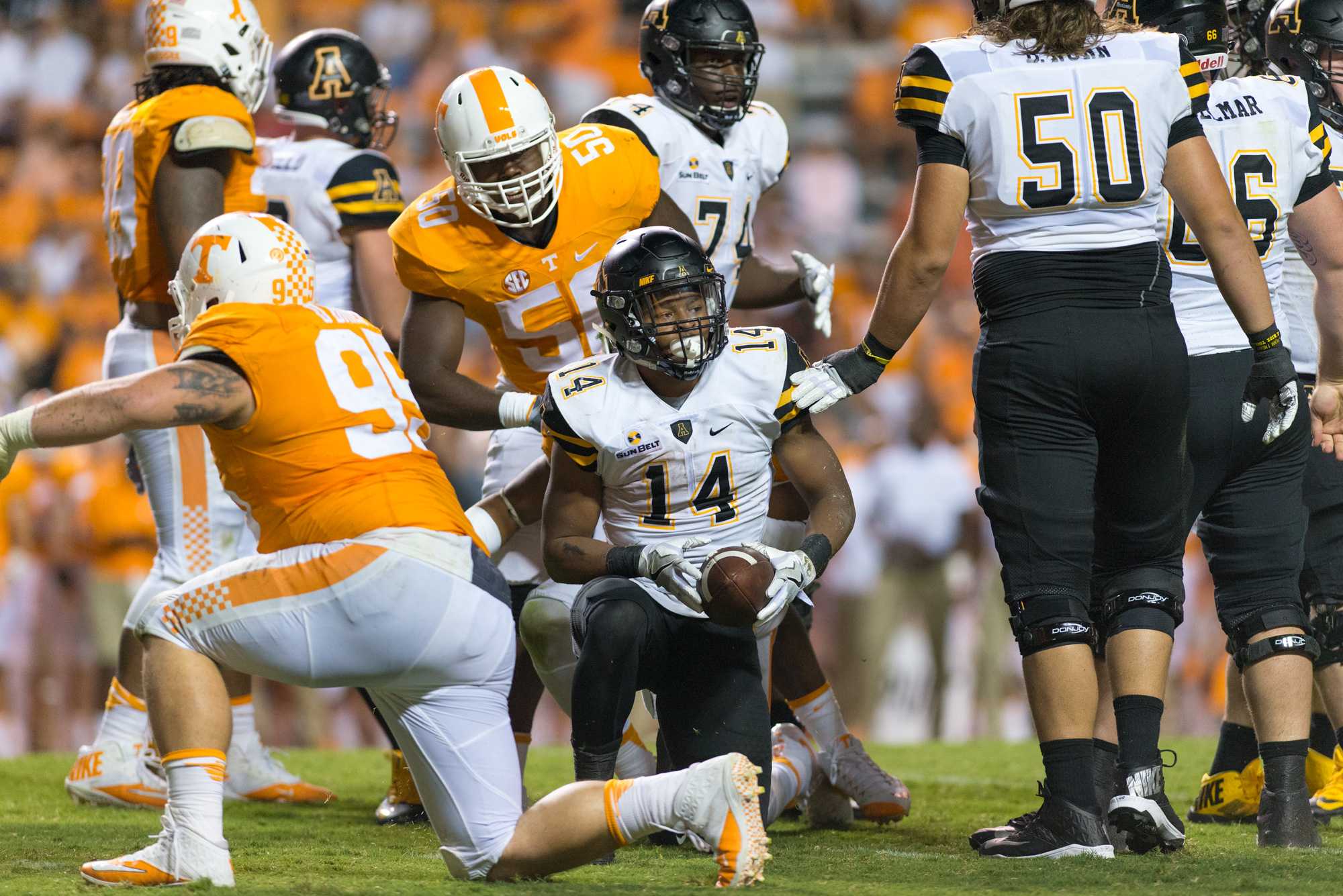 Cox stands up after running with a carry against the Vols. Cox finished with 115 yards. Photo by Dallas Linger

Nine years ago to the day that App State beat Michigan in one of the biggest college football upsets of all time, the Mountaineers fell just short of capping off another thrilling upset falling in overtime 20-13 to #9 ranked Tennessee.

Leading 13-3 at the half, the Mountaineers (0-1) were unable to capitalize on the Vols second half fumble mishaps which ultimately led to a Tennessee comeback.

In front of an electrifying 100,074 fans at Neyland Stadium, it looked as if it would be a long night for the Mountaineers after receiving a costly personal foul by senior offensive lineman Parker Collins for a loss of 11 yards.

Following the penalty with a four and out, Tennessee (1-0) fumbled a punt return and Mountaineers senior safety Alex Gray recovered the ball for a huge momentum change.

“When they dropped the punt, we just went right into our plays and went down there and scored,” junior quarterback Taylor Lamb said. “I think we moved the ball well.”

Grays recover led to a five play, 36 yard touchdown drive led by Lamb and senior running back Marcus Cox to silence the crowd when Lamb ran five yards for the first score of the game putting the Mountaineers up 7-0.

“Taylor (Lamb) played well,” head coach Scott Satterfield said. “He ran the football, scored touchdowns and was very efficient. He managed the game like we wanted it managed.”

Showing their offense can keep up with one of the top defensive-lines in the country, the Mountaineers would not back down forcing the Vols to only achieve a first quarter 23-yard field goal after a 15 play drive.

Things got aggressive towards the end of the first quarter when Tennessee’s senior linebacker Jalen Reeves-Maybin was ejected from the game for a helmet-to-helmet hit on senior wide receiver Jaquil Capel.

“It definitely gave us some momentum,” Cox said. “Jalen (Reeves-Maybin) is probably their best player on defense, so when a team loses a leader like that, it definitely hurts. So I felt like that was a big turning point for us in the game, which we could have capitalized on more.”

The Mountaineers came out in the second quarter strong with a huge Lamb to Cox 33 yard touchdown pass to expand the lead. However, redshirt freshman Michael Rubino missed the extra point leaving the game 13-3.

Ending the half with senior cornerback Mondo Williams making an interception, Satterfield told the team that if they stayed close, the game was theirs to win.

“Our goal was to run the football and control it. As long as we play great defense, we would be able to stay in the game,” Satterfield said. “That is what happened. We knew if we could get to the fourth quarter, we could win the game at the end.”

They definitely stayed close with strong performances from both the defensive and offensive line. But the heat caught up to some of the Mountaineers as senior linebackers John Law, Kennan Gilchrist and defensive end Dezmin Reed went down with cramps in the third quarter giving the Vols a glimpse of momentum.

“I can’t say enough about the guys up front. They have really been ready to perform. We have had multiple guys step up,” junior linebacker Eric Boggs, who finished with 12 tackles, said.

True freshman cornerback Clifton Duck who impressed with seven tackles and two breakups, unfortunately was tested in his first career start when Vols senior quarterback Joshua Dobbs completed a 67 yard touchdown pass over Duck to Josh Malone tying the game at 13 a piece.

“We had some big plays. We had a rhythm and now it’s taking advantage of those plays. We were in good position and executing,” Dobbs said.

With five minutes remaining in the fourth quarter, the Mountaineers had a chance to take the lead and opted to give Rubino a 42-yard field goal attempt but he missed it wide left.

“You don’t know how guys will react. This is the first game, and this is a tough environment to come into for a freshman kicker,” Satterfield said. “I told him to kick the ball and not try to guide it. If he will just swing and kick it, he has a great leg. Those are the things we will work on.”

The Mountaineers got the ball back with 2:39 remaining in the game with the chance to finish off the game they controlled defensively with a game winning drive.

Moving the ball 56 yards to the Vols 37-yard line with seven seconds left on the clock, the Mountaineers opted not to call a timeout and Lamb rushed for seven yards unable to make it out of bounds in time to end regulation and send the game to overtime.

“I looked before we snapped it, and I saw it counting down at 15. I think I snapped it at probably about 13. I had to scramble out, and I didn’t want to put it into jeopardy downfield because they had good coverage downfield,” Lamb said. “I saw an opening, and I tried to get to the sidelines as fast I could, but it just wasn’t enough.”

In overtime, the luck didn’t fall in App’s favor and Dobbs rushed towards the end zone only to fumble the ball and have it recovered by running back Jalen Hurd giving Tennessee the 20-13 victory, capping off a hard fought battle by the Mountaineers.

“It hurts. Any loss hurts, and especially to see it end like that, it’s pretty bad,” Boggs said. “I mean as a whole, I feel like we did a good job of competing with a top-10 team. People weren’t really expecting us to come in and play like this, but we played with everything we had.”

One thing is for certain: The Mountaineers competed all four quarters and overtime with a top ten team in the country and should not be overlooked. And they let the rest of the football world know it.

“I have a lot of respect for that football program,” Tennessee head coach Butch Jones said. “We knew that it was going to be a great challenge. You don’t win 17 out of your last 19 games and just expect to come in here (and not compete). They’re a physical, tough football team that’s very active in their defensive front, which causes some issues up front.”

App State will look to redeem itself next week when they return home to The Rock and take on Old Dominion at 3:30 p.m.