Mountaineers outlast Trojans in new ‘Miracle on the Mountain’ 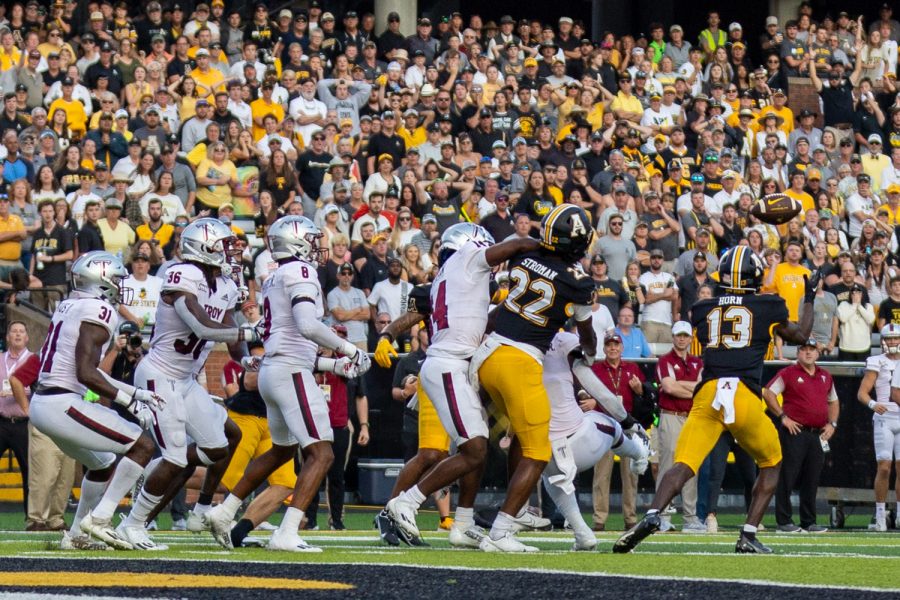 With ESPN’s College GameDay in town, App State defeated Troy 32-28 Saturday thanks to a hail mary touchdown pass on the final play of the game.

“I’m thankful for a win and proud of our players for playing 60 minutes of football. I think that’s what this program is built upon is never giving up,” head coach Shawn Clark said. “I think God’s a Mountaineer today.”

For the first time in App State history, ESPN’s College GameDay came to Boone Saturday morning ahead of the matchup. Thousands of fans gathered on Sanford Mall to watch the show, which featured celebrity guest picker and former App State student Luke Combs.

Starting around noon Friday, fans set up camp on Sanford Mall to prepare for Saturday morning’s filming of College GameDay. A roughly estimated thousands of fans stayed up all through the night, and a line to enter the pit began to form at 1:50 a.m. Fans remained standing outside of the pit until the gates were finally opened at 6:30 a.m. Even then, fans continued to stand in the packed pit throughout the three-hour filming of College GameDay. After the noon conclusion of the show, fans moved to tailgating before the 3:30 kickoff of App State vs. Troy.

“You can’t put a price tag on what College GameDay brought to our university, brought to the town of Boone and brought to our program,” Clark said. “There was a lot of noise and buzz in the town … I’m just proud of the way our guys handled it.”

“Home games at The Rock are special,” redshirt senior quarterback Chase Brice said. “It does something to you. When we leave our locker room and run out there and we’re holding the flags and we see black and yellow light up the stands, it’s a special feeling.”

The Black and Gold began the game on defense after winning the coin toss and deferring. On Troy’s first play of the game, senior defensive back Dexter Lawson Jr. intercepted a pass from Trojan quarterback Gunnar Watson and took it down to the Troy 38-yard line. Brice and the Mountaineers needed just three plays to find the end zone, connecting with redshirt sophomore receiver Dashaun Davis for a 17-yard touchdown.

The Trojans returned the favor with their own 75-yard drive in 13 plays. Running back DK Billingsley completed the drive with a 19-yard rush up the middle for a touchdown.

Troy forced back to back punts on App State’s ensuing drives, leading to a barrage of deep passes from Watson on the Trojans’ third drive. Watson led the visitors 81 yards in eight plays, rushing a 1-yard quarterback keeper for the score. Troy captured a 14-7 lead with 8:43 left in the second quarter.

On the following possession, redshirt junior running back Camerun Peoples rushed for 38 yards on a 14-play drive before Brice found sophomore running back Anderson Castle in the end zone, tying the game at 14 apiece with just 1:22 remaining in the first half.

Troy responded swiftly, marching 75 yards in the final 1:22 of the half. Watson rushed in another 1-yard touchdown as time expired, giving the Trojans a 21-14 halftime lead. Troy concluded the half with 195 passing yards to App State’s 87.

The effects of no sleep and over 10 hours of standing were evident in the Mountaineer student section. While students typically stand for the entirety of games excluding halftime, rows of fans sat down during timeouts and breaks in the action.

With his team down seven at the break, Clark delivered a message to his team in the locker room.

“He told us we’re gonna have to break their will,” Brice said. “We knew they weren’t just going to give up.”

The Mountaineers hit the ground running at the start of the third, completing a 75-yard drive in just nine plays. Redshirt senior running back Daetrich Harrington ran in a 19-yard touchdown to tie the game 21-21.

Similar to App State’s opening drive of the game, the quick start made it seem as if the Mountaineers would run away with the game, but Troy wouldn’t give in.

After a quick three-and-out from both teams, Troy pushed the ball to the App State 15-yard line. The Mountaineer defense held off the Trojan attack, forcing a missed 32-yard field goal attempt.

The fourth quarter was tightly contested until the final play.

Early in the quarter, Troy raced down the field with several deep passes before running back Kimani Vidal rushed in a 1-yard touchdown. The Trojans took a 28-24 lead with 10:10 left.

Trailing by four, the Mountaineers attempted to put together a game-winning drive beginning at their own 25. App State marched all the way down to the 2-yard line, converting two fourth downs and using nine minutes of game time. On 4th-and-goal at the two, Brice targeted sophomore tight end Eli Wilson in the back of the end zone. The two were unable to connect and a collective gasp of shock was released throughout Kidd Brewer Stadium. Troy gained possession with 1:13 remaining and many fans began to file out of The Rock.

App State’s defense allowed Troy to gain just nine yards and used its final two timeouts to stop the clock, bringing up fourth-and-1 with 25 seconds left. With a four point lead, the Trojans elected to run off some clock and take a safety, but 20 seconds still remained. The Mountaineers would receive one final drive facing a two-point deficit.

“We learned a good lesson in 2020 versus Lafayette here on Friday night,and that was kind of the same scenario in some ways,” Clark said. “They took a safety, and in that moment, we said ‘We have a chance to win this football game.’”

Sophomore running back Ahmani Marshall returned the kickoff to the App State 47-yard line, and the Mountaineers had just 15 seconds left to score. Much of the App State faithful that remained in Kidd Brewer clung to a final strand of hope, especially as the favorable field position to begin a late, dire drive looked eerily similar to App State’s previous home game.

Only this time, Brice did not complete a quick, deep completion toward the sideline. Instead, he threw three consecutive incompletions, bringing up fourth down from the Mountaineers’ 47.

Many fans who had stuck it out for most of the game began to trickle out again, especially students who had been awake for well over 24 hours straight.

Still, two seconds remained, and a historic day in Boone would conclude with one final heave.

Redshirt freshmen receivers Dalton Stroman and Michael Hetzel, along with Robinson, lined up to Brice’s right, while sophomore receiver Christian Horn lined up on the left side of the field. Brice took the snap and dropped back as all four receivers sprinted toward the end zone, converging at the 5-yard line on the right hash marks. Slight pressure from the Trojans forced Brice to roll left as he stepped into the 50-yard heave.

Brice launched the hail mary high into the air, soaring all the way to the 5-yard line. Stroman leapt toward the ball with one Trojan defender as six other Troy defenders prepared to guard the end zone. The pass was knocked forward as Horn circled in from behind the play, collecting the ball and sprinting straight toward the right side of the end zone. Without missing a beat, Robinson blocked a Trojan defender, sealing off Horn’s lane to the end zone and a miraculous win.

“I threw it and I’m just looking, I’m praying,” Brice said. “I just celebrated with the fans, I didn’t know where my team was honestly. I’m just running around like my head’s cut off, and then come into the locker room and celebrate with my team.”

Kidd Brewer erupted into a panicked frenzy of elation. Fans lept from their seats, screaming as they embraced their friends, family and complete strangers alike. Fireworks shot into the sky, the sound of a train horn blared over stadium speakers and the Mountaineer faithful who stuck it out until the final play stormed onto the field.

“It was a surreal moment,” Horn said. “I’m still in awe honestly.”

Soon after storming the field, fans took to the nearby Duck Pond for celebratory dives. Celebrations carried on across campus for the rest of the evening as Boone was full of cheering, honking and high fiving well after the game.

“It was a fantastic moment to share with my teammates; the fans at App,” Horn said. “It brought the city of Boone together, and I feel great about it.”

“I have the utmost confidence in Chase Brice,” Clark said. “If the game’s on the line, I want Chase Brice to have the football.”

The Mountaineers’ defense finished with three sacks and one interception. Junior defensive back Nick Ross led the team with 12 total tackles.

For App State, Saturday’s game was a continuance of a historic and exciting season. The Mountaineers opened the season with a home attendance record-shattering shootout against North Carolina Sept. 3, and then traveled to College Station, Texas, a week later, where they stunned No. 6 Texas A&M 17-14.

“My blood pressure’s been through the roof, so it’s been a wild three weeks for sure,” Brice said. “It’s college football. You never know what can happen.”

The win over the Trojans puts the Mountaineers at 1-0 in conference play and 2-1 overall on the season. They will face off against James Madison Sept. 24 in Kidd Brewer Stadium. The 3:30 p.m. kickoff will be streamed on ESPN+.