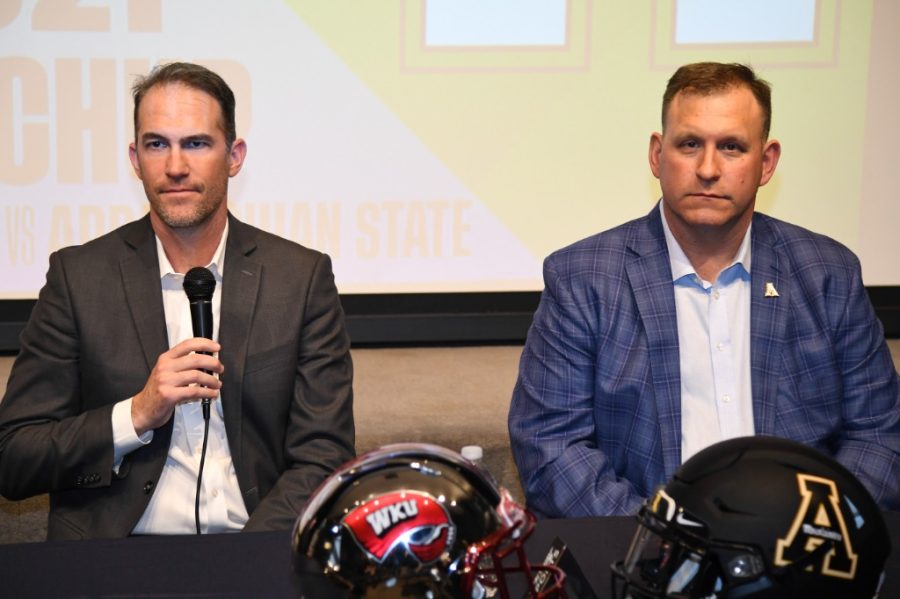 One week before the Boca Raton Bowl showdown between App State and Western Kentucky in December 2021, the state of Kentucky suffered the deadliest storm in its history.

“It was heartbreaking, honestly,” said Western Kentucky receiver Jerreth Sterns. “I think the next morning, me and my little brother were just kind of walking around some of the parts, and you see trees everywhere, people’s roofs gone, glass everywhere. It’s crazy to think about, and it’s saddening that people were in the houses at the time, little kids.”

A slew of devastating storms and tornadoes struck six states across the South and Midwest, and as of Dec. 19, 78 Kentuckians were left dead. With the bowl game scheduled for Dec. 18, it was apparent that the contest would represent more than football.

Despite their matchup on the field, the Mountaineers and Hilltoppers immediately joined forces to support the WKU community in the face of tragedy. App State Athletics aided Western Kentucky by asking Mountaineer fans and community members to donate supplies to send as relief.

“Our thoughts and prayers go out to Western Kentucky with the tornadoes, and I’m very proud of our university, our alumni for supporting the blood bank at Western Kentucky,” Clark said. “I think it speaks volumes to our program of what we represent.”

One podcast that focuses on Mountaineer sports launched a GoFundMe to help support the communities ravaged by the deadly storms. The Black & Gold Podcast’s GoFundMe soared past its initial goal of $3,333, which represented Boone’s elevation, raising $20,956 in total to benefit the Western Kentucky Regional Blood Center.

“In the spirit of good sportsmanship and teamwork before our bowl game in Boca Raton with the Western Kentucky Hilltoppers, we’re helping out the folks in western Kentucky,” said the Black and Gold Podcast on the GoFundMe page. “We chose to benefit Western Kentucky Regional Blood Center Inc, and any donation will help make an impact during this chaotic time.”

For the Western Kentucky community, the game truly was bigger than football. Hilltopper head coach, Tyson Helton, said it provided a much needed distraction.

“It’s an opportunity for our community to sit down and be able to watch the game and take their minds off everything that’s going on,” Helton said.

The Hilltoppers went on to defeat the Mountaineers 59-38 and be crowned Boca Raton Bowl champions.

“Bowl games are important, and winning is important, but it means more today,” Helton said. “We knew that our state and our community was watching, and we needed to make them feel good.”