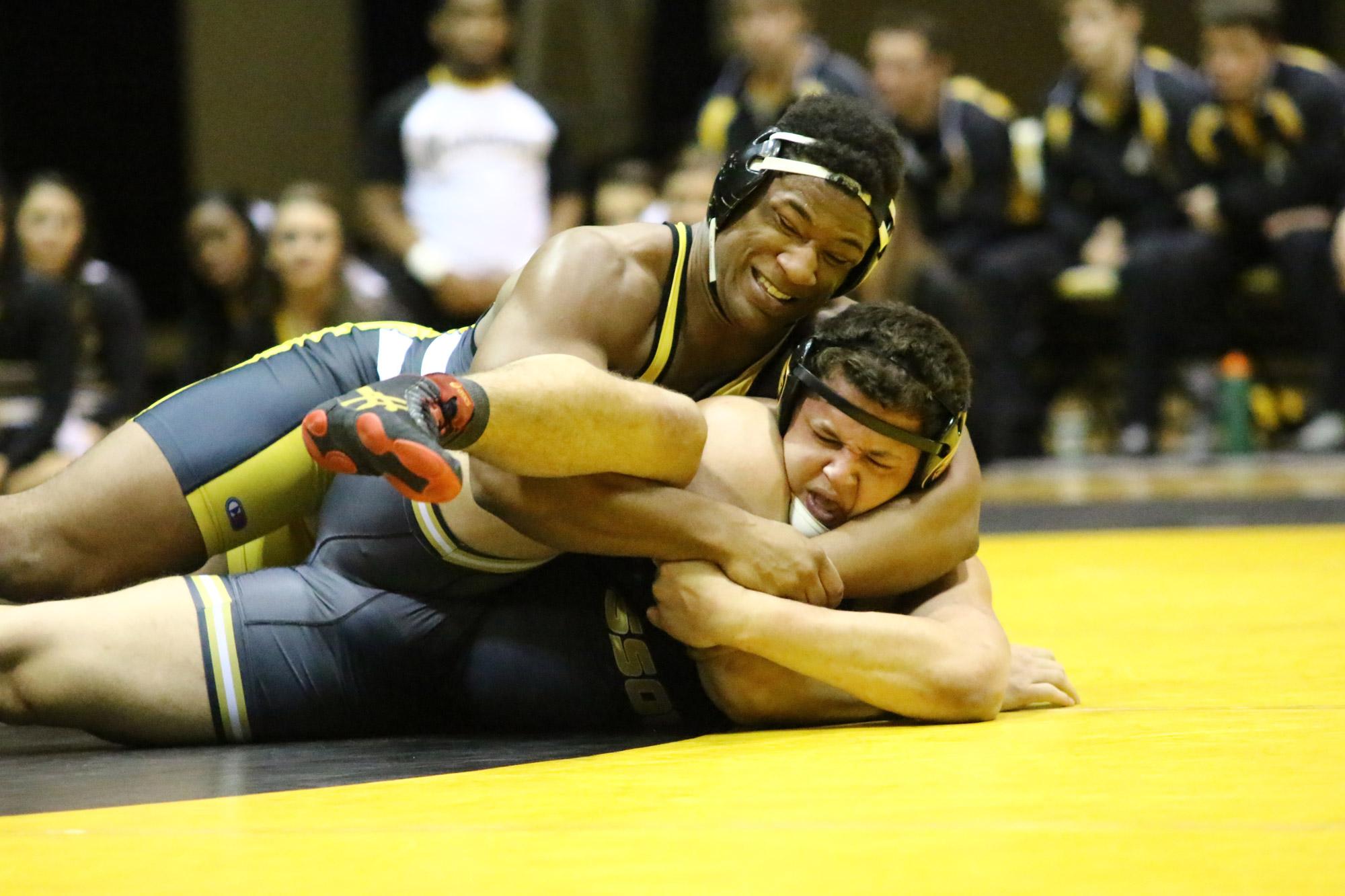 Denzel Dejournette attempts to pin his opponent during a wrestling match this season. Photo courtesy of Rob Moore.

Welcomed by a plethora of “boos” from Hoosier hopefuls, the Mountaineers wrestling team (12-4, 6-1 SoCon) traveled north on Sunday to take on Indiana (6-7, 3-6 Big Ten).  Unfortunately for the home fans, however, they would leave feeling hopeless, as the Mountaineers prevailed 21-13.

Although App would start the match off with a 6-4 decision win in the 157-pound match by David Peters-Logue, Indiana fired back with three wins of their own, bringing the score to 10-3 in favor of the Hoosiers.

But in the 197-pound matchup, a Randall Diabe decision would help to put the Black and Gold back on the right track.  Denzel Dejournette was flawless as always, and trampled Indiana’s attempt to stop him, bringing the Mountaineers within one at 10-9.

Vito Pasone took on No. 19 Elijah Oliver in the 125-pound weight class and fought until the end. But in the final seconds of the third period, Oliver managed to take down Pasone to set the score 13-9.

The Hoosiers would not lay down on their own, so Michael Longo and company had to help them hit the mats. After a 6-2 decision by Appalachian’s Irvin Enriquez, Longo kept the momentum rolling, pinning a Hoosier and retaking the lead 18-13.

In the final bout of the afternoon, Matt Zovistoski added a 6-5 decision to seal the deal for the Apps and taking down the Big Ten’s Hoosiers 21-13.

“We deserve to be here,” Dejournette said. “We can win at any level if we just put our minds to it. It doesn’t matter the size of our school or program we have the biggest heart out there.”

“It was a great team effort,” Bentley said. “It kind of wrapped up the ‘dual meet’ season how it’s been all year.”

That statement is most certainly true as the Mountaineers have managed to receive their highest ranking in a poll ever this weekend.  FloWrestling ranked App as high as No. 18 in the country while the USA Today bumped the Mountaineers to No. 23 over both Arizona State and SoCon rivals Chattanooga. The Mountaineers also moved up three spots in the InterMat Wrestling poll, from No. 25 to No. 22.

On March 5, the SoCon comes together in Asheville for the conference tournament championship. Chattanooga is looking to defend their five-time run as SoCon champions but have a huge obstacle in their way. A 6-foot-2-inch, 265-pound obstacle named Denzel Dejournette, to be more precise.

But Dejournette isn’t the only obstacle. Every Mountaineer on the squad poses a threat to opponents as well. Each played a part in the team’s 22-15 victory over Chattanooga on Feb. 5, when the team handed the Mocs their first SoCon loss since 2012.

“I know we’ll be prepared,” Bentley said of the upcoming tournament. “I’m confident in our guys.”

There is no doubt that at some point in the tournament multiple Mountaineers will come face to face with a Bulldog from Gardner-Webb, who the Mountaineers suffered their only conference loss to in January.

Dejournette touched on going into the tournament better than what they were and finishing out matches. The heavyweight for App said it was all about having faith over fear.

“We know we worked hard and we need to believe in our conditioning and the process coach put us through,” Dejournette said.

Looking back on past seasons, the Mountaineers are no stranger to talented wrestlers. In fact, Bentley said he has had previous teams in which the group of guys were just all around better athletes. Talent, however, is not the only thing that makes a team successful.

“The most important factor in having a successful year is having a group that buys in and is 100 percent in to what your vision is,” Bentley said.

The chemistry and culture of a team is what makes or breaks the group.  For this group, nothing appears to stopping them.

The Black and Gold eagerly await March 5 to finally take their shot to claim their title as the 2016 Southern Conference champions.